In 1841 seeds from Syrian tobacco plants were acquired by the Bombay Presidency.  Seeds were distributed to twelve collectorates or botanic gardens throughout Bombay Presidency with instructions to undertake experiments to see if the correct soil and climate conditions for growing the plants could be found. 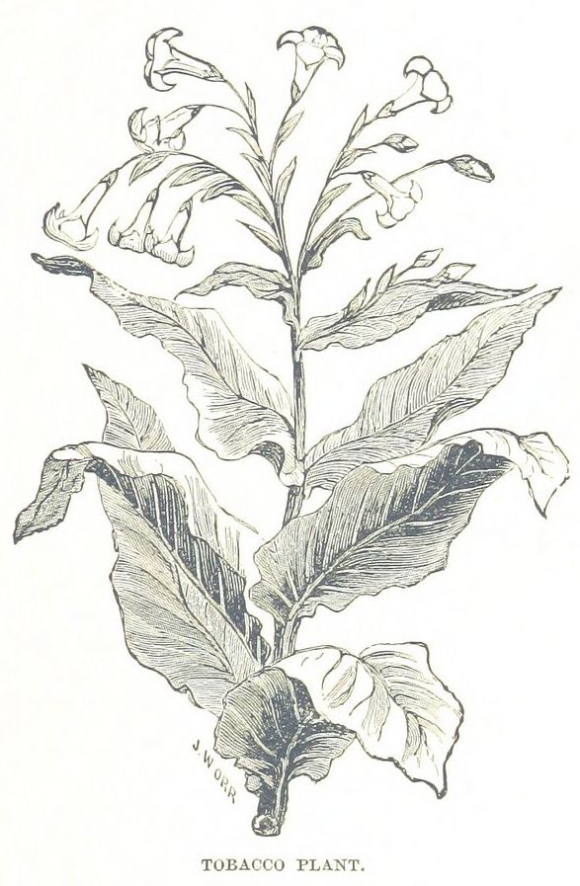 On 10 July 1843 the Bombay Revenue Department submitted a letter reporting on the results of these experiments to the Court of Directors of the East India Company in London. The experiments had very mixed results.

In the collectorates of Ahmedabad, Khandesh, Ratnagiri, Surat and Thane the experiments failed completely as the plants either did not vegetate or died shortly after they appeared above the ground.

In Kaira [Kheda] the seeds sprang up well but most were washed away in heavy rain.  Those that survived produced a very small yield of an inferior quality to the local tobacco grown and were therefore considered a failure.

In Pune two of the three experiments failed, and the third although successful was not harvested in time and became a victim of the strong winds in that region.  As some seeds from the successful experiment had been preserved, it was decided that future experiments should be conducted by the Botanic Gardens there.

In Ahmednagar and Solapur one or two plants grew successfully and produced leaves of a good quality; seeds from these plants were preserved to be sown again the following year.

Dharwar was considered to be the most successful province as the first attempt sprung up and was growing well, but was a victim of the strong winds that follow the monsoon.  A second attempt was made to plant the seeds much earlier, however none of these vegetated so on the third attempt they were again planted later in the year.  This attempt was successful with good healthy plants and good quality leaves, but the plants received considerable injury from insects.  The seeds from these plants were preserved with the intention of trying again the following season and of sending them to other collectorates such as Thane to see if they would be successful there too.

The Botanic Gardens at Dapurie attempted the experiments on a much larger scale and they were successful in obtaining a good quantity tobacco from their plants.  They even sent samples of the product to London for the Court of Directors to test and give their opinions. 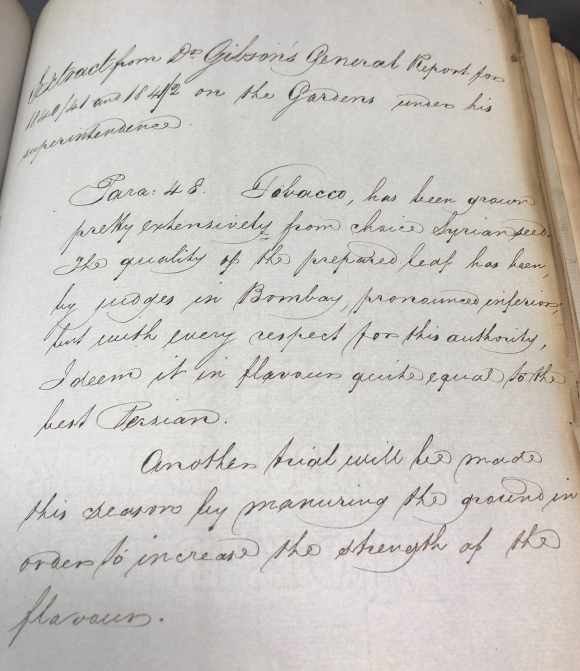 The report concluded however that Syrian tobacco had not generally adapted to the soil and climate of Bombay Presidency.  There had however been requests for fresh seeds to do more experiments and that request had been sent to the Company’s agent in Egypt.  They hoped that some of the collectorates that had seen some success would be able to replicate it on a larger scale in the future.

Further reading:
IOR/F/4/2808/91724 experiments introduced in the several collectorates of the Bombay Presidency with a view of proving the adaptation of the soil and climate to the production of Syrian tobacco

Posted by Margaret.Makepeace at 09:00:00 in Commerce , Science and environment , South Asia