After a voyage to the Pacific in HMB Endeavour lasting almost three years, James Cook arrived back in England in 1771.  By then more than 40 of the ship’s company had died, most from diseases caught on the way back in the Dutch colonial city of Batavia (now Jakarta, Indonesia).  This death, among the voyage’s first, was not, however, from natural causes. 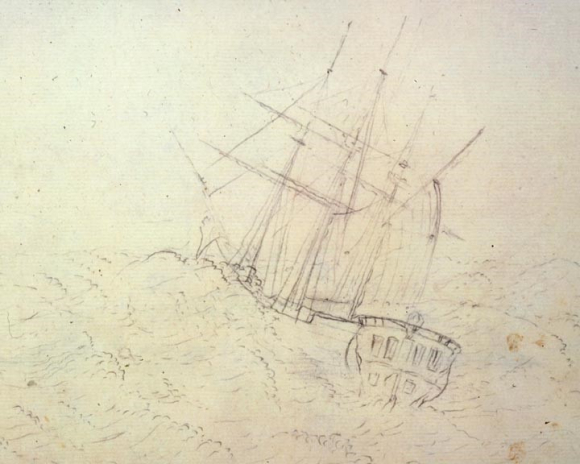 Private William Greenslade was one of twelve marines serving under Sergeant John Edgcumb.  Barely 21 years of age, quiet and industrious, Greenslade disappeared overboard on 26 March 1769, as the Endeavour was within days of its destination – Tahiti.  Both Cook and the young botanist Joseph Banks describe the events retrospectively and second hand.  As Cook noted, 'I was niether made acquainted with the Theft or the circumstances attending it untill the Man was gone'.

According to the accounts of Cook and Banks, Greenslade had shame heaped upon him by his fellow marines and Sergeant Edgcumb for having stolen a piece of sealskin in his care.  The sealskin acquired in Tierra del Fuego was prized for making waterproof bags to protect tobacco.  Banks appears to have concluded it was suicide, sure that Greenslade 'was drove to the rash resolution by an accident so trifling that it must appear incredible to every body who is not well accquainted with the powerfull effects that shame can work upon young minds'.  Cook was not quite so so sure, writing that his disappearance overboard might have been 'either by Accident or design', although he too agreed that 'circumstances makes it appear as tho it was done designedly'.

However Banks's description opens up opportunities to speculate about the role of the other marines, especially Sergeant Edgcumb, opportunities that Martin Dugard explores fully in Farther Than Any Man.  We learn from Banks that the sealskin was in the charge of one of Cook’s servants, possibly Thomas Mathews, who had promised to make tobacco pouches for several of the men.  Greenslade’s requests for one had been refused several times.  While Greenslade was on duty outside the Great Cabin around noon, Cook’s servant had been called away hurriedly, leaving the sealskin with the young marine.  The temptation apparently proved too much to resist, and he cut a piece from it to make his own tobacco pouch.  When the servant immediately discovered the theft on his return, he decided not to raise it with the officers “for so trifling a cause”.  The marines, however, had other ideas.

Sergeant Edgcumb “declard that if the person acgreivd would not complain, he would”,  and resolved to take the matter to the captain, for the honour of the marines.  Between the noonday theft and around seven in the evening, the marines “drove the young fellow almost mad by representing his crime in the blackest coulours as a breach of trust of the worst consequence”.  When Edgcumb ordered the young marine to follow him up on deck, Greenslade slipped away and was seen no more.  It was half an hour before Edgcumb reported him missing, by which time there was no chance of a rescue.

For Dugard, there is enough in these accounts to speculate whether Greenslade had been deliberately set up with the temptation to steal and driven to suicide.  Whatever the truth, young William Greenslade holds a melancholy place in the records of Cook’s first Pacific voyage.