The British Library is celebrating the completion of a four-year project to conserve two unique but badly degraded silk flags dating from the 1790s. 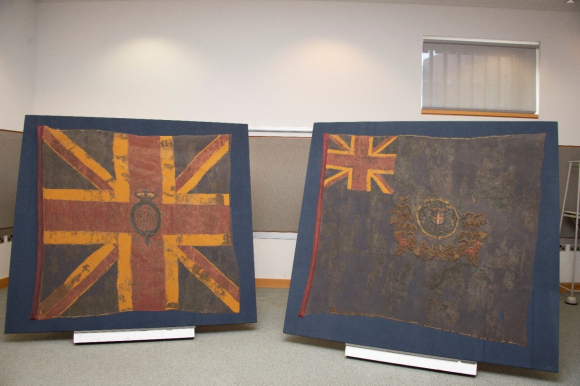 The flags are a set of colours belonging to the Royal East India Volunteers formed by the East India Company in London during the French Wars to protect East India House and the Company warehouses ‘against hazard from insurrections and tumults’ and to assist the City government in times of disorder.

The REIV were embodied at two separate periods, from 1796 to 1814 and then from 1820 to 1834.  The field officers were elected from Company directors, and commissioned officers were recruited from clerks and officials at East India House and the warehouses.  The supervisory grades in the warehouses became non-commissioned officers who led labourers serving as privates. By 1799 there were three regiments with about 1500 men.  A register of labourers in the REIV soldiers 1820-1832 has survived giving age, height, home address, reason for discharge from the corps.  Some men were discharged because training clashed with their warehouse duties or secondary afternoon jobs. Others were judged unfit to serve – Charles Twort was discharged for having bad feet and corns. 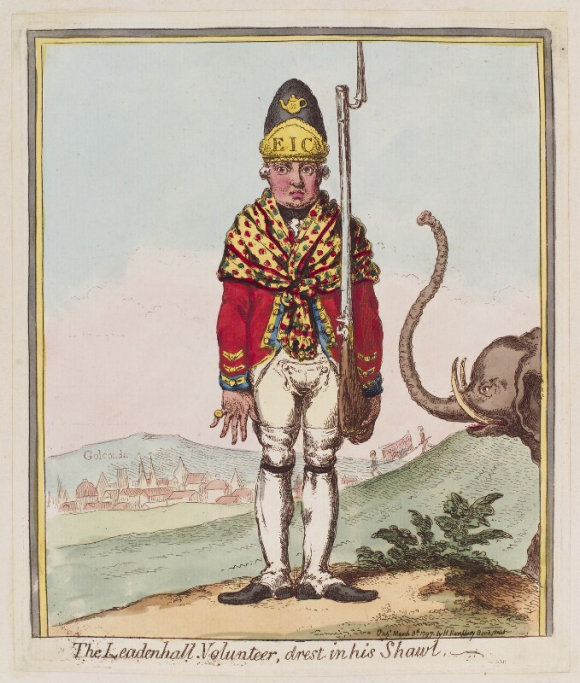 Each REIV regiment had a set of colours.  It appears that Lady Jane Dundas embroidered all three sets. Her husband Henry Dundas wrote to Company director David Scott on 4 November 1796 that Lady Jane had taken a fancy that she ought to work a pair of colours for the East India Corps and that she needed instructions. Lady Jane presented the colours at three public ceremonies in April 1797, July 1797, and June 1799. 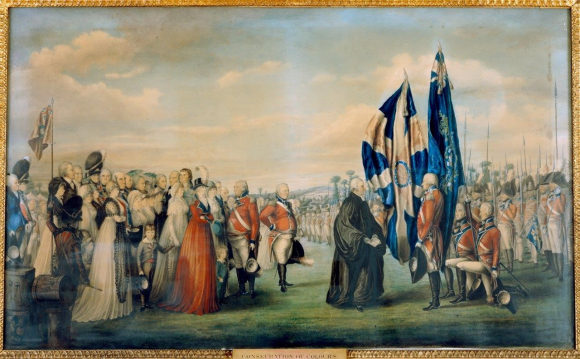 Consecration of colours which Lady Jane Dundas presented to the Third Regiment of Royal East India Volunteers at Lord's Cricket Ground on 29 June 1799.  The watercolour by Henry Matthews is part of the British Library’s Visual Arts collections (WD2425). It is reproduced in William Griggs, Relics of the Honourable East India Company (1909).

One set of colours was presented to the re-embodied REIV on 14 June 1821. When the REIV was finally disbanded in 1834, these colours were deposited in the museum at East India House. Sir George Birdwood found the colours later in the 19th century at the India Store Depôt at Lambeth and placed them in the Military Committee Room at the India Office in Whitehall.  They were still on display in Whitehall as late as 1963. 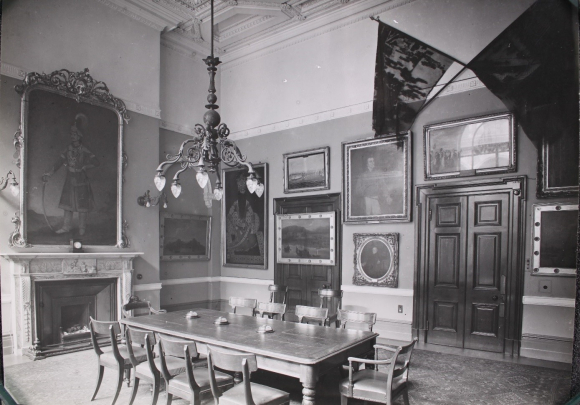 Photograph of the Military Committee Room, India Office, Whitehall  (BL, Photo 272). The colours can be seen in a degraded state unfurled above the door.

In 1895 the colours were lent to Empire of India Exhibition at Earl’s Court.  The catalogue described them as ‘tattered and torn in the most approved fashion but no tale of glory hangs thereby. Only in marches and reviews in London Fields did these colours wave to the breeze, and damp and the ravages of rats and mice are responsible for their present condition’. 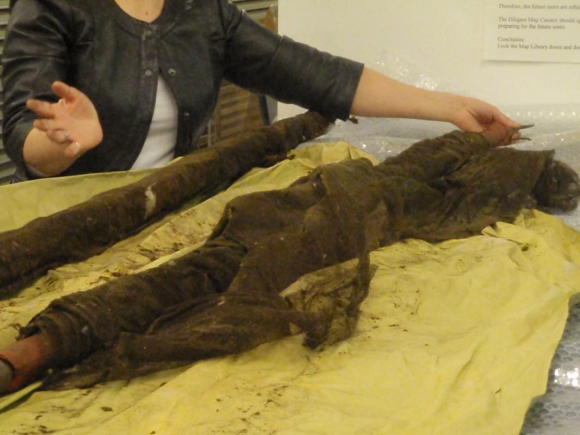 The colours had become fragile, fragmentary and soiled. Large areas of silk loss made the flags very hard to interpret. Surprisingly, the complex embroideries which decorated the centre of the flags were predominately intact although structurally very weak. 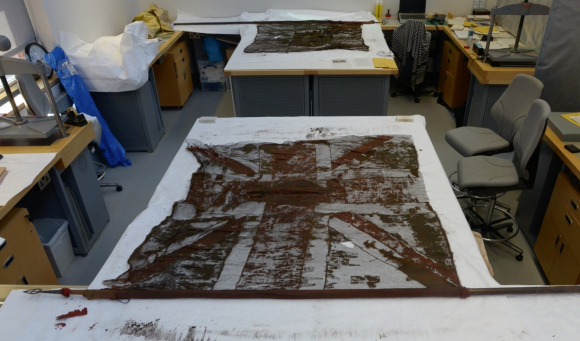 The conservation treatment of these two flags included: surface cleaning; removal of the central embroideries; wet cleaning; crease removal; mounting on a padded board covered by a digitally printed image of the flag to enable interpretation and covering with a specially dyed nylon net which prevents the loss of the fragmentary silk.

The conservation will enable access, display and research by ensuring the longevity of these precious and important flags.

Come behind the scenes and meet those involved in this project on Tuesday 2 April at our Textile Conservation Show and Tell.

Posted by Margaret.Makepeace at 2:40 PM