I forgot to mention the fact that we crossed the line yesterday and the fun which had been in store for some days came off in grand style.

We have recently catalogued the journal of Engineer Frederick Thomas Pendleton, documenting his time on board HMS Hecate on patrol with the West Africa Squadron. In addition to descriptions of daily shipboard life and provision stops along the west coast of Africa, Pendleton provides an entertaining and detailed account of a ceremony to mark crossing the equator. 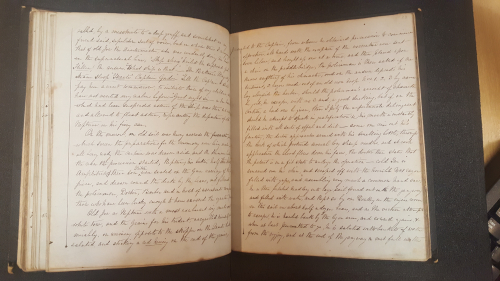 Crossing the Line ceremonies have been documented in European navies since the 17th century, and Pendleton’s account appears to be fairly typical of the ceremony as performed on British vessels in the mid-19th century. Events begin the day before the line is crossed, with the ship receiving a message from Neptune, King of the Sea, announcing his intention to visit the crew and welcome those of his ‘children’ who have not visited his realms before. My attention was called by a messmate to a deep gruff and somewhat, as my friend said, sepulchre sort of voice, but in whose tones I recognized that of old Joe the Quartermaster, who was evidently doing his best in the supernatural line…

Following the exchange a lighted barrel of tar was allowed to float off astern, representing the departure of Neptune and his crew. The next morning the deck was transformed into an arena to welcome the aquatic host -

…all being ready the curtain was drawn aside, and the drummer leading the van the procession started: Neptune; his better half the huge Amphirite; & their son Triton were seated on the Gun carriage of the field piece, and drawn round the deck by the bears, and followed by the policemen, Doctor, Barber, and a host of assistant comprising those who have been lucky enough to have crossed the equator previous. 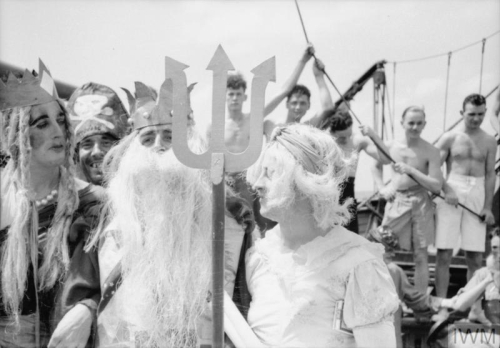 The initiates were marched to meet the royal party, and forced to sit with their backs to a large bath of water. Here they were interrogated by Neptune and a policeman as to their character. Crewmen judged of good character went straight to the barber, where they were lathered and shaved, before being ducked by the bears and released to the fellow crewmates.

3 razors made out of an old iron hoop Nos 1, 2, 3 by name lay alongside the barber, should the policeman’s account of character be good, he scrapes with a no 3 and a good ducking… 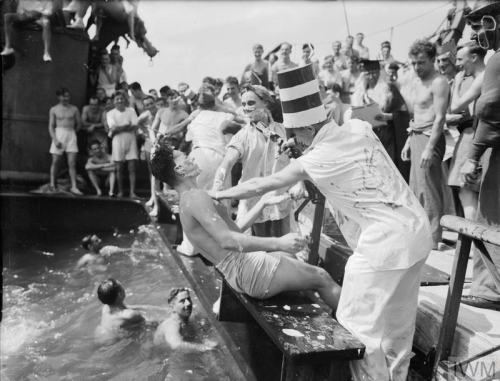 © IWM (A 5176) Initiate being ducked by the bears on board the troop transport Empress of Australia, August 1941. Imperial War Museum https://www.iwm.org.uk/collections/item/object/205185436

A bad assessment of character – typically given to unpopular crew – attracted a much more unpleasant and violent ceremony, beginning with the attentions of the doctor:

… if on the contrary a bad one be given, then I pity the unfortunate delinquent should he attempt to speak in justification & his mouth is instantly filled with all sorts of offal and dirt – someone cried out he’s fainting, the doctor approaches armed with his smelling bottle, through the cork of which protrude several long sharp needles… the doctor then states that the patient is in a fit state to undergo the operation – cold Tar is smeared on his chin, and scraped off with the horrible No 1 razor… very much resembling a common hand saw. 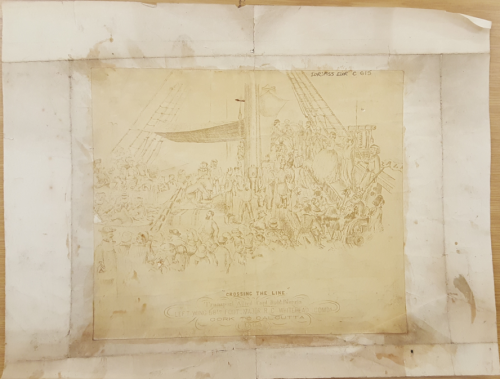 The shave was then followed by repeated ducking from the bears, and additional watering –

when at last permitted to go, he is saluted with buckets of water from the rigging, and at the end of the gangway is met full in the face by a powerful jet of water, coming from the hose of the fire engine – no doubt shortly after you will see him playing a very prominent part in the punishment of others.

You can imagine that the desire to subject officers to the same treatment would have been fairly strong among a number of the crew, but Pendleton identified a common mitigating factor –

Officers underwent the same process though with less severity, attributable in many instances to sundry bottles of Grog, distributed among Neptune and his attendant spirits – I must say that I enjoyed the scene, and shaving very much 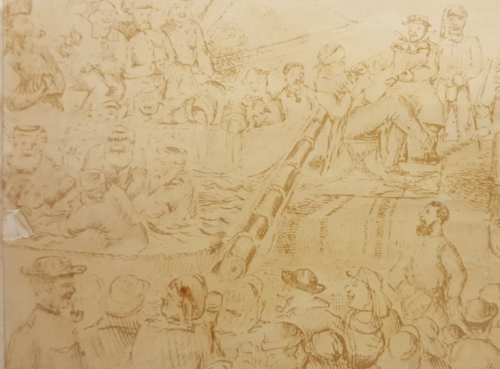 The full account of the ceremony can be read in Pendleton’s journal, now available to view in the Manuscripts Reading Room, Add MS 89374.