Indian Seamen and the Steamship 'Rauenfels' during World War One

The India Office Records contains many interesting files on the subject of Indian seamen, or lascars, during the First World War.  One example is a file on the lascar crews of German ships interned at various Neutral, Allied and British Ports.  The file contains correspondence, memoranda and statements concerning Indian seamen who had been serving on German ships prior to the outbreak of war in 1914, and had either been stranded at whatever port their ship was interned or had managed to return to India but with a loss of wages.  The file includes statements often listing the names of the seamen, the port of discharge, the name of the ship, and the amount of any wages owed. 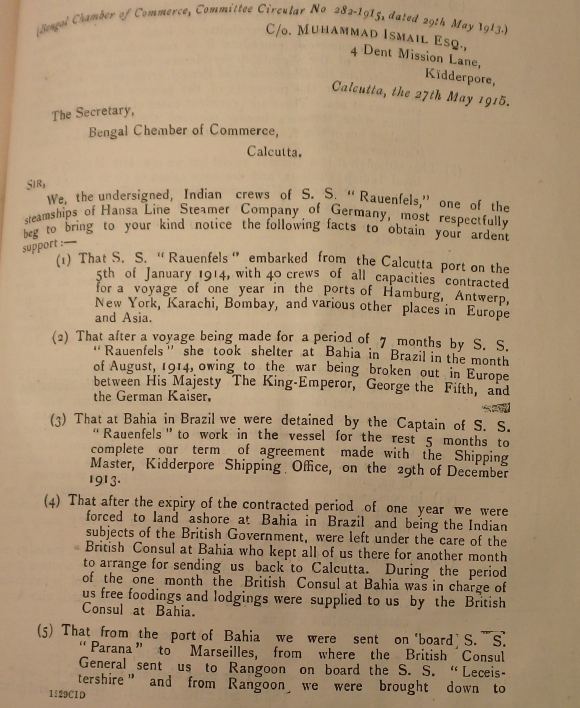 Among the papers in the file is a petition from the Indian crew of the German ship Rauenfels describing their case.  The Rauenfels was a steamship of the Hansa Line Steamer Company of Germany, which embarked from the port of Calcutta on 5 January 1914 with a crew of 40 contracted for a one-year voyage to various ports in Asia and Europe, including Hamburg, Antwerp, Karachi, Bombay, and also New York.  With the outbreak of war in August 1914, the ship took shelter in Bahia in Brazil.  The Indian seamen were kept aboard ship for 5 months in order to complete their agreed term of employment, after which they were forced to go ashore, and left under the care of the British Consul there.  They stayed at Bahia for a month, and were supplied by the Consul with food and lodgings, before being sent back to Calcutta via Marseilles and Rangoon.  The British Consul in Brazil had told the seamen that they would receive the pay still due to them when they reached Calcutta, but six weeks after returning to India, they had still not received it.  They therefore sent a petition to the Bengal Chamber of Commerce in Calcutta, which forwarded it to the Government of India for consideration.  The decision reached by Government was that Local Indian Governments could make such payments to seamen, and then if possible recover the amount plus any repatriation costs from the ships owners or agents. 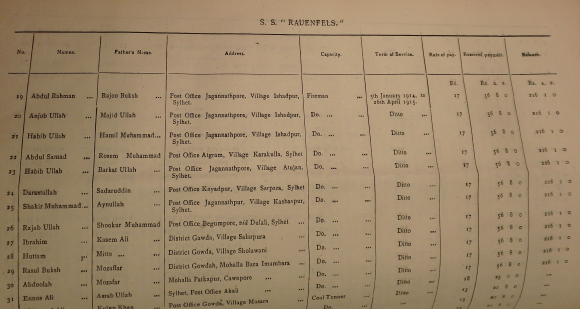 With the petition was sent a fascinating list of the 40 crew members giving their names, father’s name, address in India, their capacity (or role) on the ship, term of service, rate of pay, the payment received, and the balance due.  Some of the extraordinary sounding names of the roles listed are intriguing, for instance Donkeyman.  This was someone who was in charge of a steam engine, known as a donkey-engine, which was usually used for subsidiary operations on board ship.

As for the ship, it was seized by the Brazilian Government in 1917 and renamed the Lages.  In September 1942, it was part of convoy of merchant ships which were attacked by a German U-boat off the coast of Brazil.  The Lages was struck by a torpedo and sank with the loss of three lives.