An Easter vacation for Indian cadets at Sandhurst

In the India Office Records there is a file dedicated to Easter vacation arrangements for Indian gentleman cadets at the Royal Military College Sandhurst in 1920.  Some cadets wanted to stay with family or guardians in the UK whilst others had more ambitious plans.  Letters between the Military Department of the India Office and the College show a wish to take account of the cadets’ wishes balanced with a duty of care for the young men. 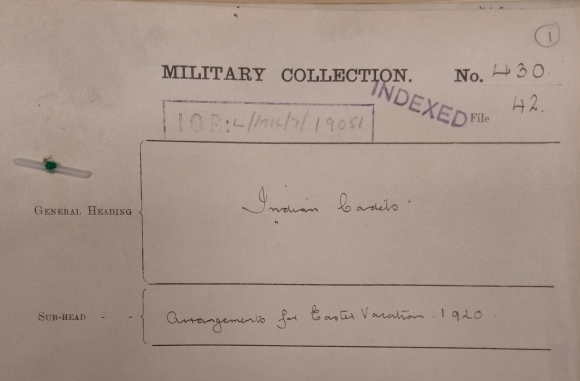 Military Department official William Henry Swain sent Sandhurst a proposal that Captain Conrad Bertie Lochner of the Indian Army should take Madanjit Singh and Tek Bahadur Shah to visit the occupied territory in Germany.  Madanjit Singh wrote a polite letter to Swain thanking him for arranging a stay in London and the trip to Cologne, but questioning whether it would be worth going to Germany for only a week.  He was keen ‘to see a few Theaters’ in London.

Faiz Muhammad and Khan Sikandar Ali Mirza wished to stay together in London without a guardian. Instead it was suggested that they stay in Harrow on the Hill with Mrs Ellen Stogdon, a widow in her late 70s. Faiz Muhammad Khan wrote to Swain that although Mrs Stogdon had been very kind to him on a previous visit, he was keen to stay elsewhere.

Sikandar Ali Mirza also sent a letter to Swain saying that he did not like the idea of staying with Mrs Stogdon.  There was absolutely nothing to do there and ‘besides I have an impression that Indians are not very welcome at Harrow on the Hill’ although ‘Mrs Stogdon herself is very kind’.   He believed he was old enough to take care of himself and to distinguish between right and wrong.

Swain suggested to Major-General Reginald Stephens, Commandant at the Royal Military College, that Madanjit Singh and Sikandar Ali Mirza might be allowed to make their own arrangements for the holiday as both would soon be fully-fledged officers.  Stephens advised against letting them loose in London alone for a fortnight.  It was agreed that Major J W H D Tyndall would take charge of Madanjit Singh, Sikandar Ali Mirza, Faiz Muhammad Khan, and Edris Yusuf Ali at the Russell Hotel in London. 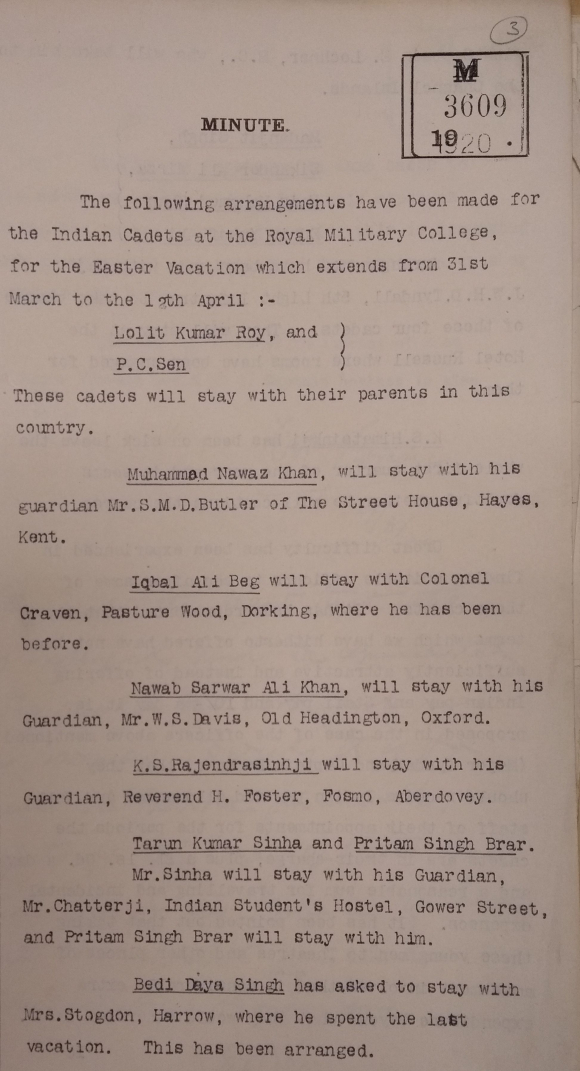 The file records that it was very difficult finding suitable officers to look after some of cadets.  The terms offered by the India Office were not sufficiently attractive. Hitherto it had offered pay plus 10s per day.  It was proposed to increase this to pay and allowances plus £1 per day and also a reasonable sum for travel and incidental expenses for officers whilst the cadets were in their charge.  Taking the young men to theatres and other places of amusement involved the officers in considerable extra expenditure.  In some cases the India Office was having to make advances to cadets for vacation expenses and then recoup this from parents or guardians in India.  There is a comment by General Sir Edmund George Barrow, Council of India, that in his opinion none of the vacation expenses should fall to Indian revenues as the cadets’ parents should provide financially for all aspects of their sons’ care.

Posted by Margaret.Makepeace at 09:00:00 in Black & Asian Britain , South Asia