Cholera on board ship at Singapore

We are pleased to mark the 200th anniversary of the founding of Singapore with a story from its very early days. 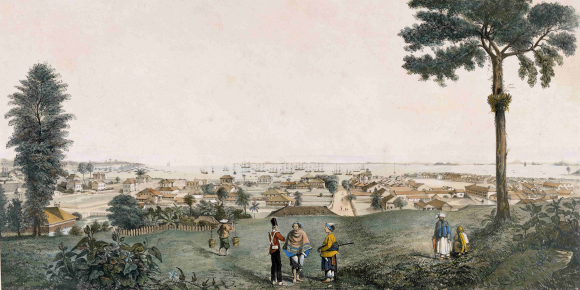 Anyone interested in researching the medical profession in pre-independence South Asia is indebted to the indefatigable Lt Col D G Crawford who published biographical information relating to thousands of individuals who served as doctors in British India. The entries in Crawford’s Roll of the Indian Medical Service, 1615-1930 often provide details such as dates of birth, retirement and death, entry into and progress through the  service, honours and awards received, and books published, and are of enormous value to those researching ancestors in this particular field.

A certain act of heroism, however, appears to have entirely escaped Crawford’s notice, for it is nowhere mentioned in the entry for William Montgomerie.

Montgomerie was a young East India Company assistant surgeon who was working in Singapore in 1823 when a ship flying the flag of the Habsburg Empire limped into port.  She was almost certainly also flying an internationally recognised warning flag, because at some point during her voyage out from Europe the deadly disease cholera had broken out among her crew.  Showing great courage over and above his professional commitments Montgomerie went aboard La Carolina to do what he could for those affected, and partly because of his efforts the vessel was able a while later to sail away safely,  most likely back to her home port of Trieste.

News of this episode on the other side of the world seems to have reached the Court in Vienna.  On 5 May 1824 the Austrian chargé d’affaires at Chandos House in London, Philip Von Neumann, wrote to British Foreign Secretary George Canning to inform him that His Imperial and Apostolic Majesty the Emperor of Austria wished to convey the gift of a ring set with diamonds as a token of gratitude for the humanitarian assistance Montgomerie had rendered to the stricken sailors.  His letter is in the Company’s archives and was written in French, the diplomatic language of the day.

It must have been extremely difficult to ensure that the ring made its way from a landlocked European capital all the way to the recipient in southeast Asia, but we do know that it was safely delivered. 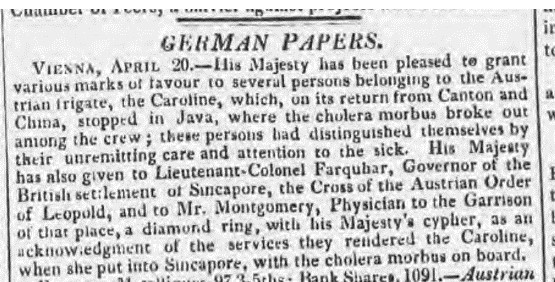 Lt Col William Farquhar, Resident in Singapore, was made a Knight of the Order of Leopold by the Emperor in recognition of his humane services to La Carolina .  However the King’s regulations regarding foreign orders prevented Farquhar from accepting this honour.  So the Emperor sent a gold snuff box ornamented with brilliants which was presented to Farquhar by Prince Esterhazy in 1826.

Our story concludes on 18 January 1850 when Montgomerie made his will.  Among its clauses is the following:

‘I desire that the diamond Ring presented to me by order of the Emperor of Austria … be left in possession of my eldest unmarried daughter until the return and settlement in England of my eldest surviving son’.