Robinson Crusoe was published 300 years ago on 25 April 1719.  Daniel Defoe’s account of a shipwrecked English sailor cast away on an uninhabited tropical island for 28 years has universal appeal because it is so believable.  Defoe effectively put into print the archetypal shipwreck yarn spun by many an old mariner.  It capitalised on the popularity of travel books and many readers did not realise it was fiction.

Part of the enduring success of Robinson Crusoe is the impact it makes on a reader’s imagination - the mind is stirred by adventure in exotic far-off places.  Illustrations have played an important role in the presentation and reception of Crusoe, whether cheap quickly executed woodcuts in chapbooks and penny novels, or coloured plates in fine bindings.  The primary topic has been the portraiture of Crusoe – John Pine’s frontispiece for the first edition sets a consistent tone.  Crusoe, the resourceful, stands with his guns looking determinedly at the prospect of surviving alone on the island, the lost ship in the background.  Supporting illustrations frequently emphasise pivotal points in the story such as the shipwreck, the discovery of the footprint and Friday’s rescue. 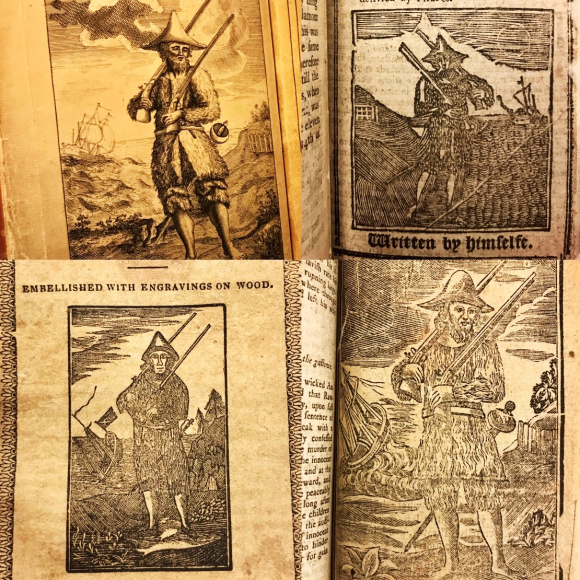 Portraits of Robinson Crusoe. John Pine’s first edition frontispiece (C.30.f.6) is top left.  Later woodcuts from a variety of chapbooks can be seen to retain the composition. 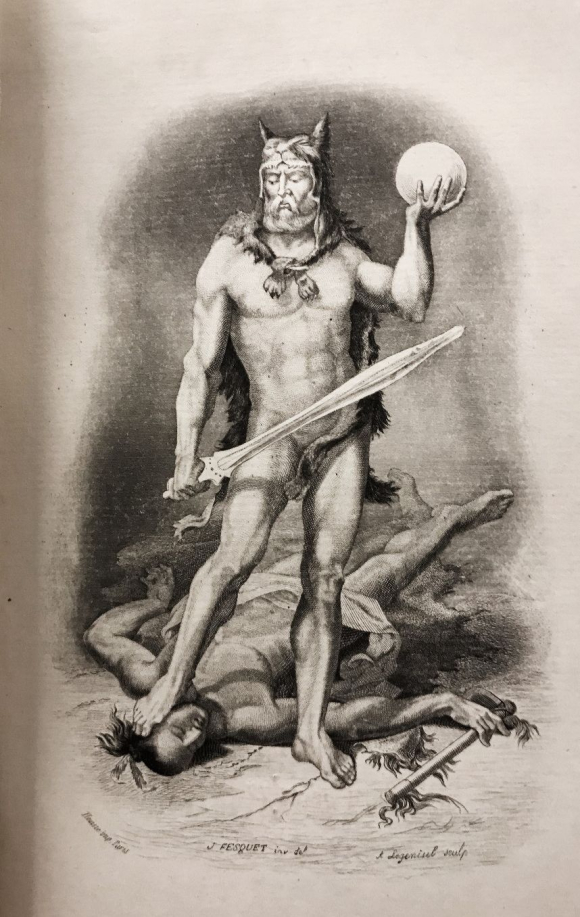 There have also been some quite ‘unique’ portraits like this fantastic effort by Jules Fesquet and Legenisel from 1877.

The proliferation of editions in the 19th century saw illustrations dominated by traditional images that are typical of colonialist assumptions and the flawed belief in white Europeans’ superiority over people and places of the wider world.  Traditional style editions routinely show Friday prostrate before his saviour, Crusoe.  In a show of submission and gratitude, Defoe tells us that Friday put Crusoe’s foot upon his head. 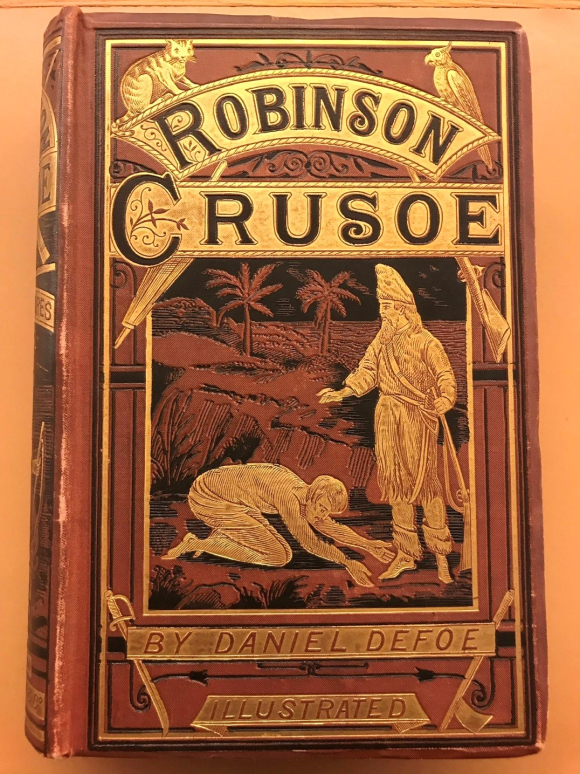 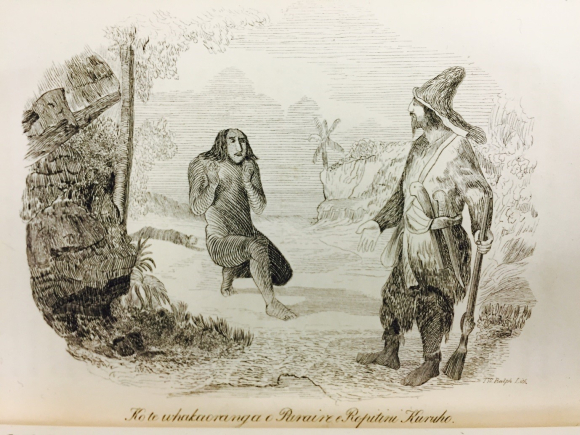 A perfect exemplar of the colonial-style depiction of Friday’s rescue can be seen in a Maori Language edition from 1852 (freely available via Explore the British Library) – the Preface by the ‘Native Secretary’s Office’ is very revealing.

Artistic capabilities are often stultified by prevalent tastes and looking at the same type of images in edition after edition of Crusoe can be tiring.  Change came with the work of artists like JB Yeats and further possibilities were pursued in the early 20th century with Expressionist art like the work of Walther Klemm. J B Yeats’ depiction of Crusoe discovering the footprint (and looking all Kirk Douglas!) 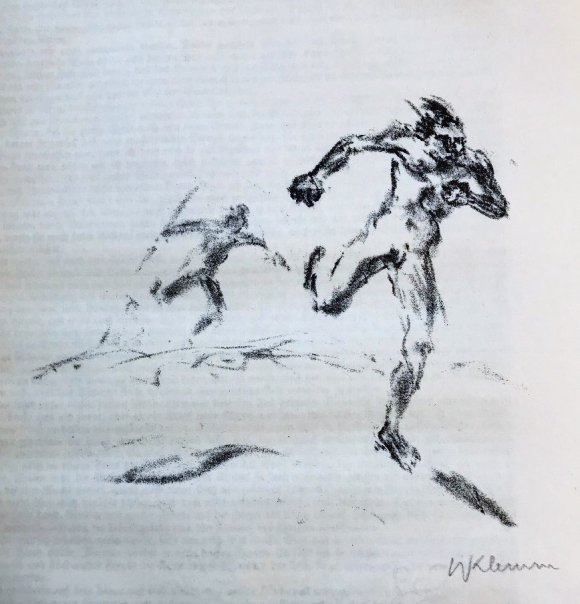 Of course, it is all too easy for most readers to take for granted the added value and meaning to be gained from illustrations.  J R Biggs, whose wonderful wood-engravings decorate the Penguin Illustrated Classics edition of 1937, remarked that 'books without illustrations make the greatest force in the world: books with illustrations the greatest delight'.

But even though Crusoe is a particularly visual work, how might the visually impaired and blind experience such a novel?  Amongst the 600 or so printed editions of Crusoe held in the British Library, one of the most impressive items is a truly sensual edition: ‘visual’ and striking by both sight and by touch.

In the 1860s, the American Printing House for the Blind produced editions of books printed, or rather, embossed, with raised Roman Type letters. 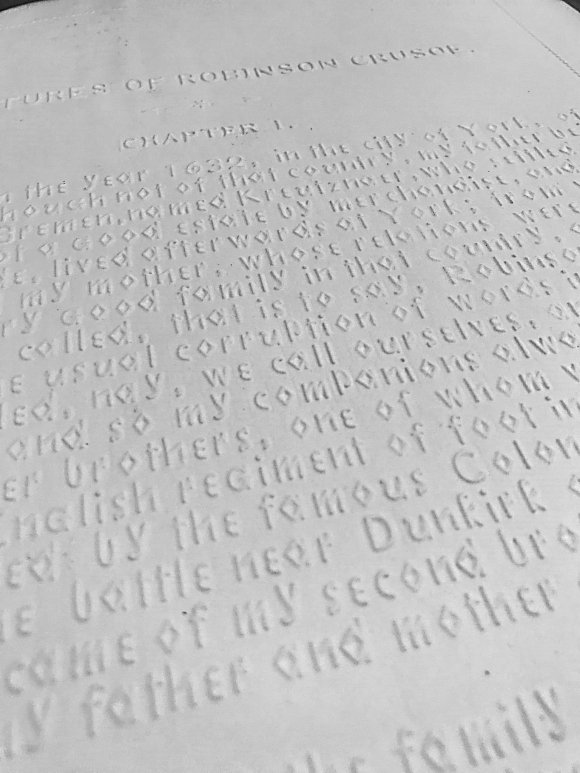 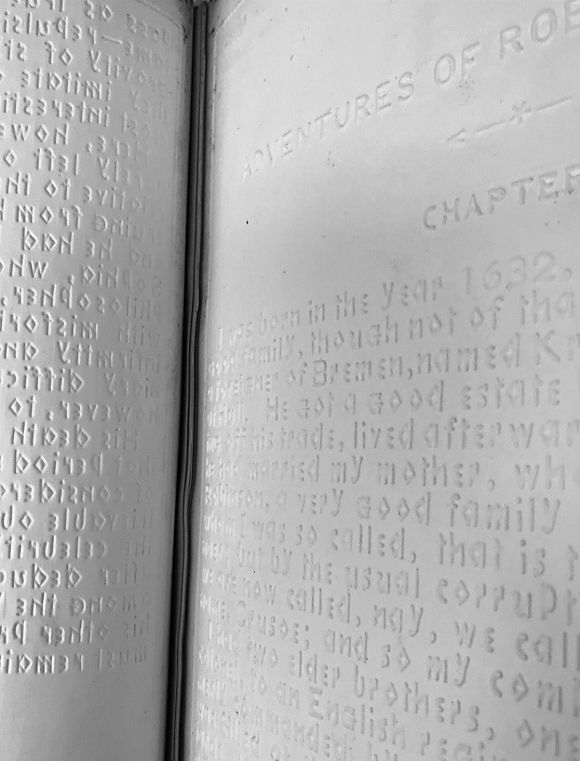 Robinson Crusoe. Presented to the American Printing House for the Blind (1873) Revolutionary for the blind.  But also aesthetically pleasing for people fortunate to be able to see the embossed type.

The expansion of cheap print for mass readerships made great use of illustrations and it assisted rising levels of literacy.  The embossed type really adds a further dimension to the visual impression made by ‘printed’ words.  The invention of printing for the blind marked a new era in the history of literature.  It made the novel personally discoverable to readers unable to see traditional ink printed texts.  It is testament to the success and universal appeal of Crusoe that it was one of the very first texts selected to be printed by the APHB enabling the shipwrecked sailor’s adventure to become embossed on even more readers’ minds.

Further reading:
David Blewett, The illustration of Robinson Crusoe, 1719-1920 (1995)
Lists of books published by the American Printing House for the Blind and by other American firms [1896]
Edmund C, Johnson, Tangible Typography, or how the Blind read (1853)

Visit our free display about Robinson Crusoe in the British Library Treasures Gallery - available until June 2019.

Posted by Margaret.Makepeace at 11:27 AM