From bad feet to blasphemy: the life of Charles William Twort

We met Charles William Twort in an earlier blog post when he was discharged in 1823 from the Royal East India Volunteers because of bad feet and corns. His later life was full of interest, involving preaching and imprisonment for blasphemy.

According to the baptism register of St Peter and St Paul in Aylesford in the county of Kent, Charles William Twort was born on 10 July 1794, although later records state he was anything up to ten years older. Twort's age is given as nineteen when he joined the East India Company as a warehouse labourer in May 1812.  He was nominated for the post by director Richard Twining and his previous occupation was servant.

By 1830, Twort had quit his warehouse job and was a dissenting preacher.  Twort wrote and published religious tracts such as The Christian Corrector corrected. By a Protestant, and distributed the works of others from his home at Hope Street in Walworth.  In 1829 he was fined for not registering pamphlets for stamp duty.  He travelled the country with John (or Zion) Ward as a ‘Shiloite’ delegated by heaven to introduce 1000 years of perfect happiness and innocence as predicted by the late religious prophetess Joanna Southcott. 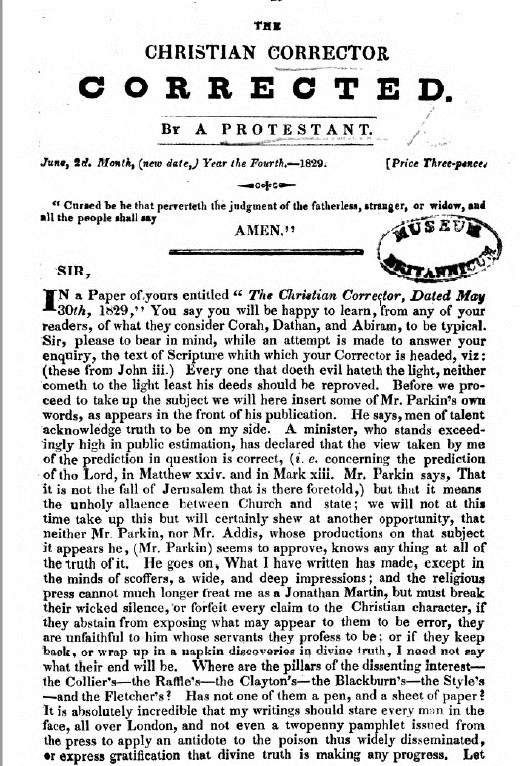 C W Twort, The Christian Corrector corrected. By a Protestant (1829)

There are many newspaper reports of Twort and Ward’s activities as they moved around, many hostile in tone. The Stockport Advertiser commented that ‘These two worthies are not altogether so heavenly-minded as to refrain from the indulgence of a glass or two of brandy before breakfast, or to debar themselves from the carnal enjoyment of tobacco and strong ale’.  According to the Birmingham Journal, Twort tried unsuccessfully to obtain the papers of Joanna Southcott from her friends.

In April 1832, Twort and Ward were in Derby, displaying posters and circulating pamphlets denying the existence of Christ.  Mr Dean, a Church of England clergyman, tore some of their placards with his umbrella and was assaulted by Twort.  Magistrates sent Twort and Ward to the Assizes.  They were found guilty of blasphemy and sentenced to eighteen months in Derby County Gaol. Petitions for their release were sent to Parliament and the Home Office in 1832 and 1833. However Home Secretary Viscount Melbourne saw no reason to grant any mitigation of the sentence. In 1834 Ward and Twort petitioned Parliament for abolition of the law which punished men for their religious beliefs, and published an open letter to the judge who had sentenced them. 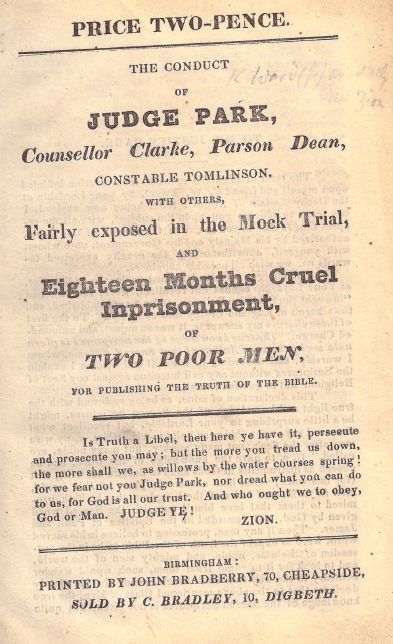 The Conduct of Judge Park, Counsellor Clarke, ... with others  (Birmingham, 1834)

John Ward died in 1837 in Leeds.  In 1841 Twort was living with his wife and daughter in Walworth. Twort’s daughter Eliza married tailor Joseph Young in 1849.  The Youngs moved to Bristol and by 1861 her mother had joined them. Elizabeth died there in 1869.  Census records from 1851-1871 show Charles Twort as a visitor or lodger in the Newington area.  His occupation is given as house proprietor or house agent, and as a broker’s assistant.  Charles died in London in 1878, his days as a preacher seemingly long since over.

Further reading:
IOR/L/AG/30/5 Register of East India Company warehouse labourers 1801-1832 - information available via India Office Family History Search
IOR/L/MIL/5/485 List of men enlisted in Royal East India Volunteers 1820-1832
The Christian Corrector corrected. By a Protestant [C W Twort] (London, 1829)
The Vision of Judgment; or, the return of Joanna from her trance (London, 1829)
The Conduct of Judge Park, Counsellor Clarke, ... with others, fairly exposed in the mock trial, and eighteen months cruel imprisonment of two poor men for publishing the truth of the Bible (Birmingham, 1834)
John Ward, Zion’s Works - New light on the Bible, the coming of Shiloh, the spirit of truth 1828-1837, 16 vols, (London, 1899-1904)
British Newspaper Archive - for example Birmingham Journal 20 April 1830; Chester Courant 12 April 1831 reprinting a piece from the Stockport Advertiser
The National Archives HO 17/60/4 and HO 13/63/230 Petition to the Home Office 1833
House of Commons proceedings 1832-1834