Findings from the Bindings: Nazi Era Spoliation Research I - The Nazi Destruction and Looting of Libraries

Between 1933 and 1945, the Nazi regime was responsible for the confiscation, destruction, looting, and coerced sale of hundreds of millions of art objects and other items of cultural, historical and religious significance from public and private collections throughout Nazi-occupied Europe.  While stories of paintings and art collections have received academic, institutional and public attention, the history of the Nazi looting of books, manuscripts, and other printed material, from public and private collections, is lesser known.

The exact numbers accounting for total loss and destruction can only be estimated, due to the widespread nature, and sheer volume of the plunder and destruction.  Recent studies, however, have indicated that 22 million volumes from 37,000 libraries, not including private libraries, were affected.  While many volumes were either burned, or sent to paper mills and re-purposed, others were retained for study, or sold to profit the Third Reich.  Likewise, numerous private collectors as well as book-dealers and antiquarian businesses were forced to liquidate their collections and either abandon their stock or sell them for below market value. 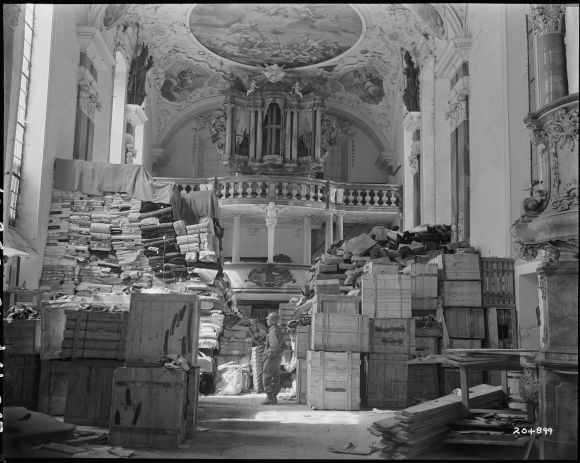 An American soldier amongst cultural property looted by the Nazis and stored in a church at Elligen, Germany in 1945.
Credit: National Archives and Records Administration, College Park, MD

At the end of the war, the western allies came across numerous repositories throughout Germany, and recently liberated territories within Europe, filled with the cultural property the Nazis had systematically plundered.  Specialist units of the armed forces were tasked with sorting and classifying the material, and where original owners could be identified, restituting the items, or returning them to their country of origin.  The post-war restitution and repatriations were not always comprehensive, however, nor were original owners able to be identified.  Likewise items that were sold on the market or changed hands between 1933 and 1945 have continued to circulate, ending up in public or private collections, or on the market, necessitating further research.

In 1998, the Washington Conference Principles on Nazi-Confiscated Art developed a consensus of non-binding principles to which forty nations signed on in a pledge to research Nazi confiscated cultural property, and achieve just and fair solutions for object restitutions.  With the UK as a signatory, and as a national institution, the British Library take its duties seriously to identify collection items that might have been confiscated, lost, sold under duress, or otherwise displaced, between the period 1933-1945.

Most recently, investigations have focused on the Henry Davis Collection of Bookbindings: an encyclopaedic collection of cloth, panel, painted, paper, embroidered, and leather-bound bindings spanning from the 12th through 20th century, made across the globe, and acquired from dealers and at auction between the 1930s and 1970s.  Gifted by Henry Davis, O.B.E, (1897-1977) to the British Museum in 1968, the collection came to the British Library in 1972.

The present blog post is the first in a series of five to highlight these investigations, share our most recent findings, and to illustrate provenance research methodology that is conducted on a daily basis within the library.

Further information:
The Nazi Destruction and Looting of Libraries public lecture given by Antonia Bartoli.

Findings from the Bindings: Nazi Era Spoliation Research at the British Library II - the Collection of Jean Furstenberg