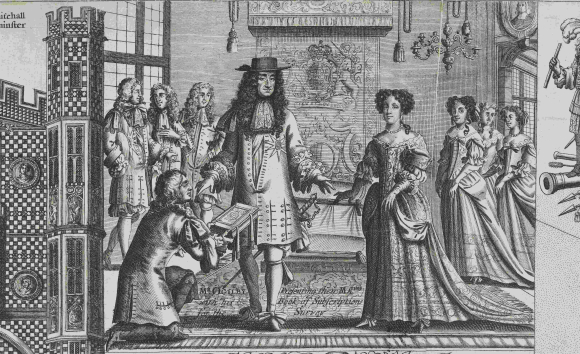 John Ogilby presenting a book of subscriptions for a survey to Charles II and his queen. Maps.Crace.Port.2.58

During his year in Restoration England, Robert becomes a favourite at the royal court.  He politely declines the advances of Barbara Palmer, Countess of Castlemaine, warns Charles about the Dutch navy’s unexpected raid on the Medway and, in an interesting subplot, pays several visits to John Milton, helping him to get his recently completed Paradise Lost past the Church’s censors.

Robert finds himself in trouble when George Villiers, Duke of Buckingham, tricks him into accepting the challenge of a game of tennis with the King.  Determined not to lose a thousand pounds to Buckingham, Robert tries to narrowly beat Charles, in the hope of sparing the latter’s embarrassment and retaining his own position at court.  Late in the final set, in a fit of rage following some grossly unfair decisions by the biased umpire, Robert unleashes an aggressive serve which hits Charles square in the solar plexus. Robert is immediately banished to the Tower. 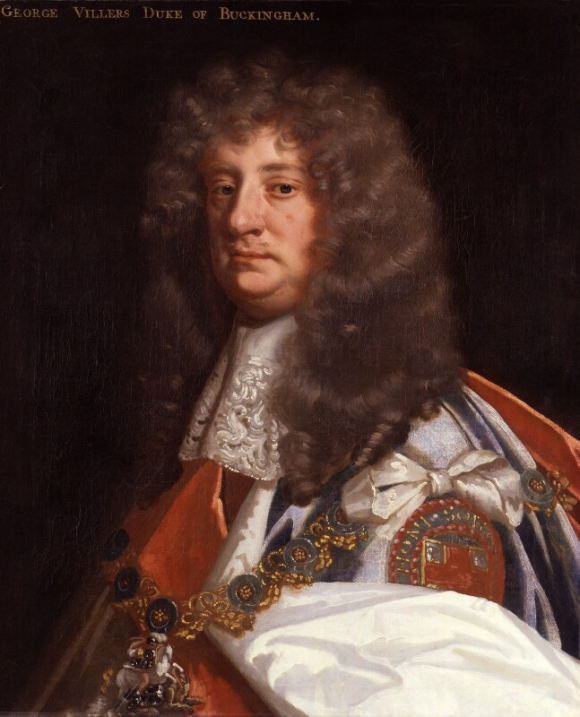 During his imprisonment in the Tower, Robert receives a visit from his doppelgänger: his ancestor George Perkins, owner of Eastern Manor, Suffolk, and Member of Parliament for the borough of St Edmundsbury, who had chanced to witness the fateful tennis match during a visit to Whitehall.  Robert accepts an invitation to stay with George for a month at the family estate following his release from the Tower.  After a pleasant stay in his ancestral home, Robert returns to London and, upon checking his funds, discovers that he is virtually penniless.  When he attempts to trade in a Perkins family heirloom (a Commonwealth pendant that he had taken back in time with him in case of emergency), his jeweller, an Alderman of the City of London, has him arrested, claiming that the pendant was made on his premises ten years earlier for George Perkins.  Robert is taken to Newgate Prison before facing trial several days later at the Old Bailey, where he is sentenced to death for stealing the diamond pendant from the house of his ancestor.  In a final twist, Robert is saved from certain death when he is transported back to the present day a few seconds before being hanged at Tyburn. 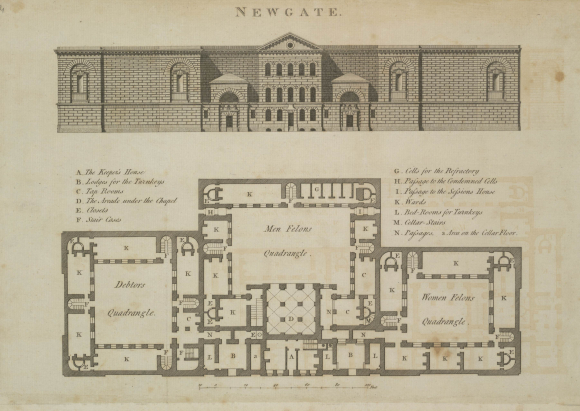 As is to be expected, the language of the novel is rather dated, as are its attitudes towards women.  It is not a great work of literature by any means, but it appears to be well-researched, and it is significant for being the first and (to this writer’s knowledge) only science fiction novel to have been written by a former British consul.

Posted by Margaret.Makepeace at 09:00:00 in Journeys , Qatar , Writing