We’ve all had the experience: you request a library book and open it up excitedly…  only to find the signs of someone else’s reading, note-taking or even eating. They got there first, and they’ve left their mark all over it. Looking at the section on notetakers in the Writing: Making Your Mark exhibition led me to think more closely about some of the different ways annotations and notetaking worked in an earlier library collection, that of Sir Hans Sloane (1660-1753).

The first type of annotation is that which uses the book as paper, without interacting with the text – although it is interesting to think about the way this changes the reading experience. Sloane’s title-page of Sir Robert Dallington’s The View of Fraunce, for example, shows two boys vying for ownership and testing out pens: 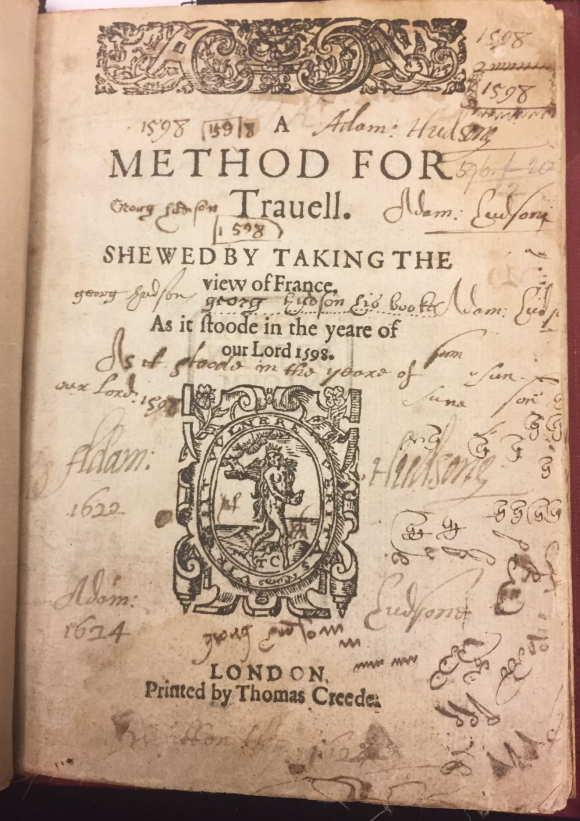 Most books which contain this sort of annotation probably ended up in Sloane’s collection as the result of the secondhand book market: these copies may have been the only ones available… or the cheapest! Either way, although other people’s scrawlings clearly didn’t bother him, we assume things like this probably didn’t hold much interest for him either.

However, there is evidence that Sloane was sometimes interested in annotations as much as the printed text which they commented upon. For example, he owned at least eight copies of John Ray’s Catalogus plantarum, all of which are annotated by different people. This often gives local information: people wrote down where they came across the plants, so when the book came into Sloane’s possession, he had that knowledge too. 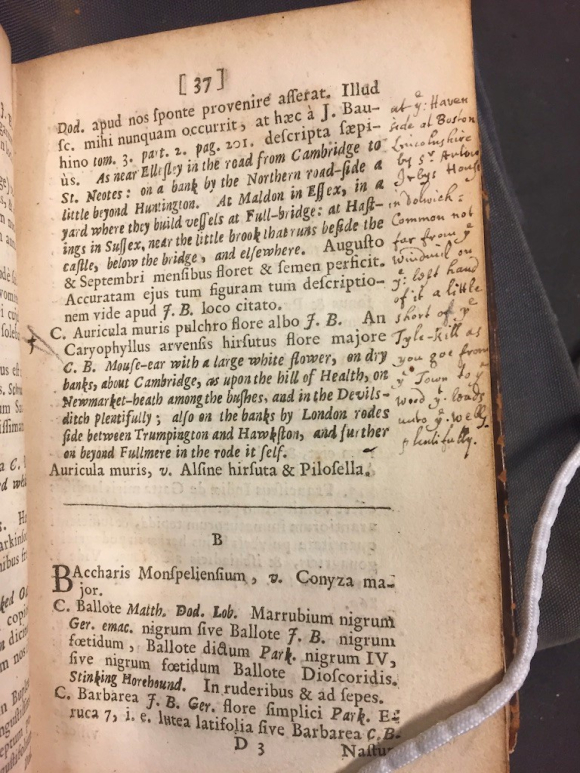 968.f.3 Manuscript note reading ‘at the Haven side at Boston Lincolnshore by St Anton Irby’s House in Dolwich-Common not far from the Windmil on the left hand of it a little short of the Tyle-kill as you goe from the Town to the Wood that leads unto the Wells. plentifully.’

However, when it comes to Sloane’s own writing in books, we see something very different. This is the third type of annotation: administrative. And it challenges many of the assumptions we might make about what it means to write in books.

This sort of writing is usually about organization and ownership. Sloane had a particularly complicated system: his earliest purchases contain spy-like codes which, decoded, reveal the year of purchase and the price. He was probably recording how much he paid in case he ever had to sell these books, as the practice seems to falter as he gains financial security. Some books also have a Latin inscription, Bibliothecae Sloanianae, meaning “from Sloane’s library” – these books are usually particularly attractive or otherwise important, which makes sense as the ones you’d most like to claim! 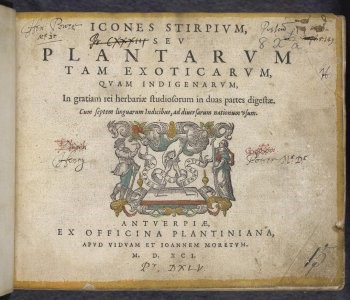 The main identification for us, however, is the Sloane numbers – a letter followed by a number usually written on the flyleaf of the book. The one here is ‘Pr DXLV’. These were a form of shelfmark, just like the ones used by the British Library today.

These codes were recorded in the catalogues compiled by Sloane and his librarians and help nuance the idea of writing as an administrative tool. It is tempting to think of marking books as something personal. When you write your name in a book it is usually to tell people you own it. It would defeat the purpose if someone else was to do that job – unless, of course, they were giving it to you! (This is sometimes the case for Sloane’s books, too.)

Here, though, it doesn’t matter who is writing the codes: they are not a mark of personal expression. Instead, this is writing with a purpose, very different to the scribbled reactions of individual readers. It shows how broad the idea of annotating can be.

Posted by Margaret.Makepeace at 09:00:00 in Rare books , Writing