The Geologist and the Tortoise

It has not often been said that behind every great man walks his tortoise.  Yet one of William Buckland’s scientific conclusions was inspired by his tortoise. 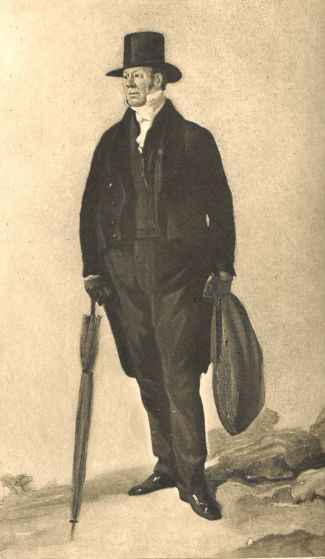 William Buckland (1784-1856) was a pioneering geologist and celebrated theologian.  He was elected to the Royal Society in 1818, and appointed Dean of Westminster by Sir Robert Peel in 1845.  One of his many research successes is the discovery of the misnamed ‘Red Lady of Paviland’ in a cave in Gower, Swansea.  This is still the oldest anatomically-modern human found in the UK.  His research partner and wife was Mary Morland (1797-1857) who specialized in technical illustrations of fossils for publication.  She also repaired broken fossils and made models of them.  When William and Mary married in 1825, their honeymoon lasted a year and was spent touring Europe, visiting geologists and geological sites.  Before marrying, Mary had already illustrated publications by French palaeontologist Georges Cuvier and for the British geologist William Conybeare. 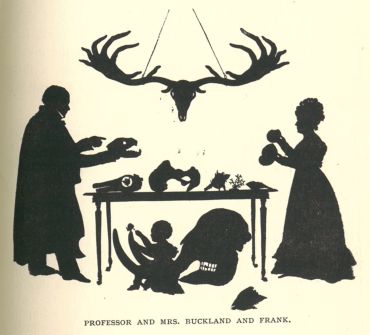 'Professor and Mrs Buckland and Frank' from Elizabeth Oke Gordon, The Life and Correspondence of William Buckland (1894)

While working on his ‘Bridgewater Treatise,’ Buckland had been sent a slab of sandstone with mysterious fossil traces on its surface.  William Buckland’s daughter Elizabeth Gordon relates how the puzzle was solved:
‘He was greatly puzzled ; but at last, one night, or rather between two and three in the morning, when, according to his wont, he was busy writing, it suddenly occurred to him that these impressions were those of a species of tortoise. He therefore called his wife to come down and make some paste, while he went and fetched the tortoise from the garden. On his return he found the kitchen table covered with paste, upon which the tortoise was placed. The delight of this scientific couple may be imagined when they found that the footmarks of the tortoise on the paste were identical with those on the sandstone slab’ (Gordon, 1894: 217).

Buckland is a celebrated figure who recognised the work of his many collaborators.  As far as I know though, the tortoise didn’t get its name in print.

Posted by Margaret.Makepeace at 09:00:00 in Domestic life , Journeys , Science , Work