A mother’s appeal for an Indian Army cadetship

An apparently ordinary early-20th century application for a King’s India cadetship within the India Office Records contains a traumatic story from the time of the Indian Uprising or ‘Mutiny’.

On 31 January 1908 Mrs Louisa Sutherland of Bedford took it upon herself to pen an appeal to the War Office on behalf of her teenage son.  Her five-page letter was forwarded, and reached the India Office on 10 February. 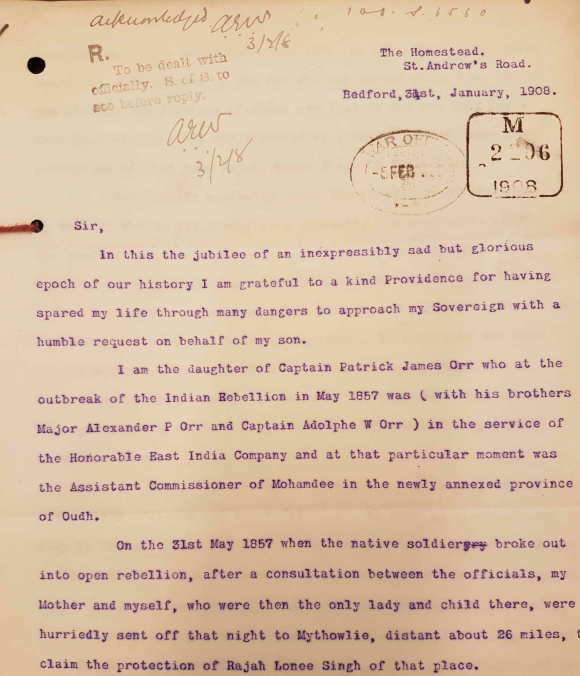 Her reason for writing was unambiguous: ‘The request and favour I now humbly and respectfully crave is that my son Herbert Orr Sutherland may be granted a King’s Honorary Cadetship in His Majesty’s Indian Army, on his passing the necessary qualifying examination … My desire is to secure for him a Commission … beyond the accident of the matter of a few marks in an open competition …'.

Mrs Sutherland's father, Captain Patrick James Orr, had been an Assistant Commissioner in the freshly annexed state of Oudh when native troops rebelled in May 1857.  Five-year-old Louisa and her mother Hannah were sent by night to seek the protection of a local Rajah, while Captain Orr stayed at his post to protect the Treasury.  Things, however, did not go to plan:
‘ … my Father was recognized by some of the men of his old regiment who called upon him to throw down his arms and said they would spare his life.  He was notoriously feared, loved and respected by the men who had served under him, and it was through the fidelity of these men that he … was escorted by them and placed under the protection of that same Rajah …'.

This protection proved illusory, however, for they spent more than two months in the jungle ‘ … exposed to the prowlings of wild animals, to the fiery heat and torrential rains of a tropical climate, without any shelter or covering, bare-footed and with scanty tattered clothing, and subsisting on the coarsest and poorest of diet barely sufficient to keep body and soul together …'. 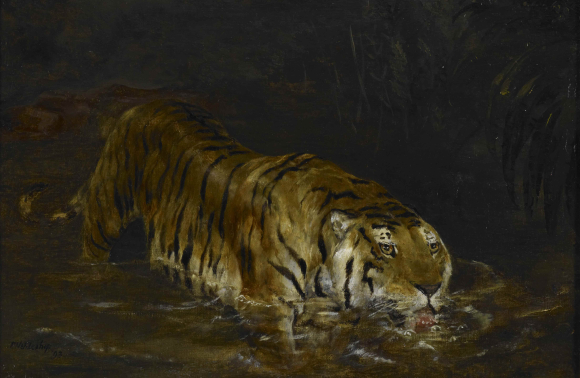 The family and the small number of Europeans who were with them were sold to the mutineers at Lucknow, which they reached on 26 October.  The four men in the party were then taken out and shot on 16 November.  Incredibly, in mid-February 1858 ‘ … after some negotiations between General Outram’s camp and one of the officials of the Rebel Durbar I was smuggled out of the City as a corpse after having been coloured to represent a native child’. 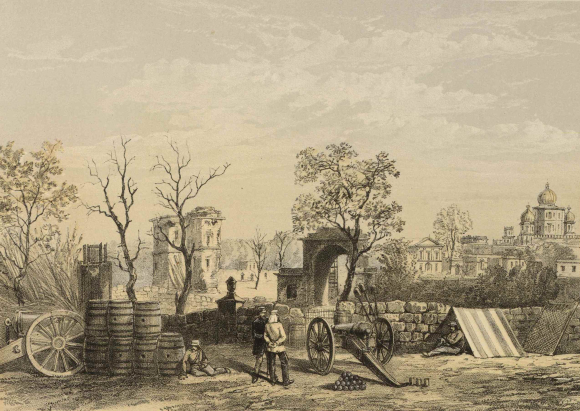 1781.c.13 - View from General Outram's headquarters at Lucknow from General views and special points of interest of the city of Lucknow, from drawings made on the spot by D. S. D[odgson] Images Online

On 19 March Mrs Orr and Miss Madeline Jackson, the only other surviving European from the original party, were rescued, and mother and child were re-united the following day.  Mrs Sutherland sought to bolster her case by mentioning that two of her paternal uncles had served on General Outram’s staff.

If Louisa Sutherland thought that recounting her family’s dreadful sufferings would melt the hearts of the India Office’s bureaucracy and gain a cadetship for her son, she was to be cruelly deceived. The cover of the file bears the word ‘Ineligible’. 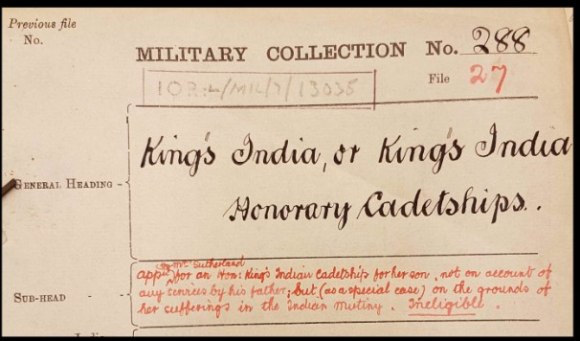 Further reading:
IOR/L/MIL/7/13035 Collection 288/27 Application by Mrs Sutherland for honorary King's India Cadetship for her son, as special case on account of Mutiny experience
M Wylie (ed.) The English captives in Oudh: an episode in the history of the mutinies of 1857-58,  (1858)
Martin Richard Gubbins, An Account of the Mutinies in Oudh, and of the Siege of the Lucknow Residency (1858)