Findings from the Bindings: Nazi Era Spoliation Research at the British Library II - the Collection of Jean Furstenberg

Included in the Henry Davis Gift at the British Library is Davis 874: Ordinarium missae pontificalis, Venice, 1595, MS with a named scribe: Fr. Cyprianus Mantegarrius.  This manuscript is recorded in Répertoire des biens spoliés en France durant la guerre 1939-1945, an inventory compiled and published between 1947 and 1949 documenting the loss of French collections during the Second World War.  Described as ‘Ordinarium — Мissæ pontificales. Venise, ms. italien de 1595 copié par Fr. Cyprianus Montegarius (no. 396 32.069)’, the manuscript is listed as missing from the collection of Мonsieur Jean Furstenberg. 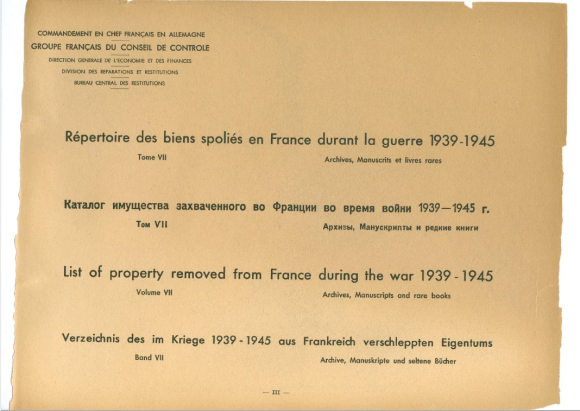 Jean, formerly Hans, Furstenberg (1890-1982) was a prominent German-French banker and book collector, with a vast collection excelling in French and Italian editions dating between the 16th and 19th centuries.  In 1938, as a Jew living in Nazi Germany, Furstenberg was forced to flee his home in Berlin.  By paying a punitive Reichsfluchtsteuer (flight tax), he was able to salvage his collection and transport his library with 16,000 volumes.  Settling in France, he took French citizenship, changed his name from Hans to Jean, and moved to the Renaissance castle Beaumesnil in Normandy.  However, in 1940, following the German occupation of France, Furstenberg was persecuted by the Gestapo, and fled to Switzerland.  Shortly afterwards his collection was confiscated by the Einsatzstab Reichsleiter Rosenberg, a Nazi looting task force, and brought back to Germany.  There it was transferred to the Zentral Bibliothek der Hoch Schule, the central library of a projected elite academy of the Nazi party. 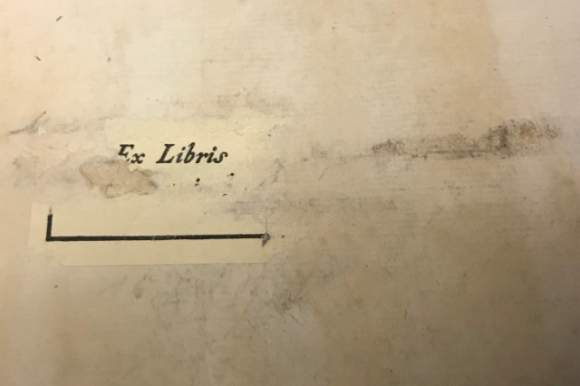 Detail, Scratched out ex-libris of Monsieur Jean Furstenberg on the front pastedown of Davis 874

Towards the end of the war, as the Third Reich’s loss became apparent, Nazi forces transferred their holdings of confiscated cultural property to depots throughout Germany and Austria.  Following liberation by allied forces, many items from Furstenberg’s collection were recovered at two castles in Annenheim and Tanzenberg, Germany.  Davis 874 was one of the items recovered postwar by Furstenberg.  It was offered for sale in London in 1958 by antiquarian bookseller Bernard Breslauer, the son of the German antiquarian bookseller Martin Breslauer and another German-Jewish émigré, who fled as a result of Nazi persecution.

Martin’s bookshop in Germany had been in Unter den Linden and subsequently in the Franzosenstrasse, areas very close to the young Fürstenberg’s family’s business.  The catalogue advertising Davis 874 was issued to mark the 60th anniversary of the foundation of the firm Martin Breslauer.  In a preface by Bernard Breslauer called ‘1898-1958,’ he discusses the life and career of Martin Breslauer, and mentions Hans Furstenberg amongst his father’s friends.  Bernard describes how the young Furstenberg made the acquaintance of his father, and how this developed into a genuine friendship.  Martin had evidently helped the young Furstenberg to form his bibliophilic tastes.

Further information:
The Nazi Destruction and Looting of Libraries public lecture given by Antonia Bartoli.

Findings from the Bindings: Nazi Era Spoliation Research I - The Nazi Destruction and Looting of Libraries