There is a book-stamp on the front pastedown of Davis 692, Johann Carion, Chronica Carionis…Auffs neuve in Lateinischer Sprach beschrieben, und…vermehret…durch Herrn Philippum Melanthonem, und Doctorem Casparum Peucerum, Wittenberg: H. Krafft, 1573.  This indicates that the volume was formerly in the collection of Lucien Désiré Prosper Graux (1878-1944).  Graux’s name appears on a report listing French Private Collections compiled in 1943 by the American Commission for the Protection and Salvage of Artistic and Historic Monuments in War Areas (The Roberts Commission), as part of their identification of cultural property at risk on the European continent. 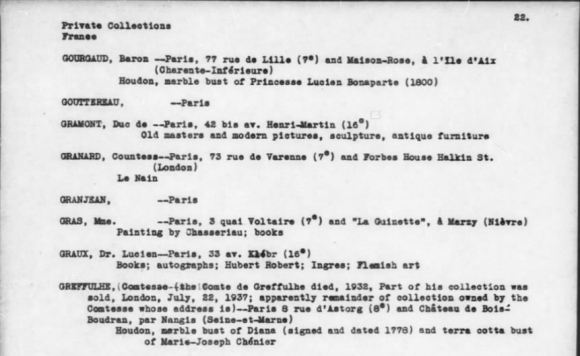 Records of the American Commission for the Protection and Salvage of Artistic and Historical Monuments in War Areas (The Roberts Commission), 1943-1946, National Archives, College Park, Maryland, M1944, Record Group 239, Roll 0021

Dubbed the ‘Prince of Bibliophiles,’ and collecting over two decades, Graux amassed one of the largest and most spectacular private collections of books and manuscripts in the first half of the twentieth century in France.  Consisting of over 10,000 volumes, the collection excelled in  French, German and Italian literature, fine-bindings, historical and literary manuscripts, music, and illustrated books, amongst others.  Housed in his mansion at 33 Avenue Kleber in Paris, books were not the only pursuits for which Graux was noteworthy: as a doctor, entrepreneur, writer and publisher, Graux crossed disciplinary boundaries, and contributed widely to medical, social, political and literary fields.

Detail, Ex-libris of Doctor Lucien-Graux on the front pastedown of Davis 692

Graux received his early training in medicine, finding success in his position as editor of the Gazette Médicale de Paris, and shortly thereafter wealth in filing a patent for the drug Urodonal.  At the end of the First World War, Graux turned his attention toward the founding of Arys, a perfume company.  He became an advisor to a number of French ministries during the 1920s, including the foreign trade, for which he oversaw a number of diplomatic missions.  His work for the French state ultimately earned him the title, Knight of the Legion of Honour.  Another venture, Graux’s publishing house Les Amis du docteur, published bibliophilic booklets, original engravings, and his own historical and biographical essays, fantastical novels, and topics including, medicine, science, and the occult, further reflecting his vast, varied and interdisciplinary interests.

With his interests in the occult and supernatural, some have referred to him as a spiritualist.  But his response to the depredation of man during the Second World War might characterize him as a humanist.  In June 1940, shortly after the German occupation of France, Graux joined the resistance.  Discovered and arrested by the Gestapo in the spring of 1944, he was deported to the Dachau concentration camp in June, where he was murdered on 10 October 1944.

Despite the wide-scale confiscation and looting of property throughout France under the Nazi occupation, and the Roberts Commission’s identification of Graux’s collection being at risk, Graux’s collection remained intact.  Retained by his widow, Mme Lucien Graux (née Léontine de Flavigny), Graux’s library was sold through the Galerie Charpentier at Hotel Drouot Auction house, Paris, in nine sales between 1953 and 1957.

Davis 692 is presumed to have been purchased from the sale on 26 January 1957 by antiquarian book-seller Bernard Breslauer, from whom it was purchased by Henry Davis on 6 August 1959.  In addition to Davis 692, many works under Graux’s authorship can be found in the British Library Catalogue.