Hidden Worlds in the Laboratory Notebooks of Anne McLaren

Building on a recent Science blog post, this post focuses on a lab notebook belonging to developmental biologist Dr Anne McLaren (1927-2007). What hidden connections does this lab notebook contain and why might it interest scientists and non-scientists alike? 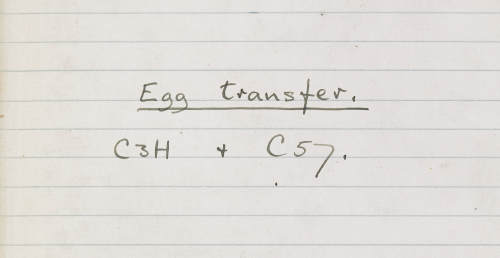 McLaren’s research on mice has contributed to many fields, including in vitro fertilization (IVF) and stem cell research. Laying the groundwork for such contributions, McLaren’s lesser-known research project from 1952-1959 explored the genetic effects that a mother’s uterus—not just the material contained in the egg—had on the development of an embryo. To study this, she and her then-husband Dr Donald Michie took two strains of mice, one genetically disposed to have 5 lumbar vertebrae (C3H) and the other to have 6 (C57), and developed a technique of transferring fertilized embryos from a donor of one strain to a surrogate mouse from the other strain. Surprisingly, the transferred babies predominantly took after their surrogate mother in number of lumbar vertebrae—and even today, the mechanisms by which this effect functions are not fully understood.

One notebook, Add MS 83844, contains most of the raw results from this embryo transfer research; however, it also contains a hidden connection. In the summer of 1958, while these experiments were underway, McLaren worked with Dr John Biggers (1923-2018) to culture 249 fertilized embryos for 48 hours in vitro (in glass) before transplanting them into surrogate mice. After 19 days of gestation, these transplants resulted in the birth of two mice, which McLaren called “bottled babies” and were the first mammals cultured outside of a uterine environment pre-implantation (McLaren and Biggers).

Add MS 83844 makes no mention of its relationship to this landmark discovery, and yet, without the embryo transfer work it documents, the bottled babies would not have been. Similarly, McLaren’s later work shows how she continued to use the processes developed during the transplant and in vitro experiments, such as in her experiments with chimeras, or mice made from mixing two different 8-cell eggs before implantation. The notebooks therefore provide unique insight into the interconnected nature of scientific exploration. 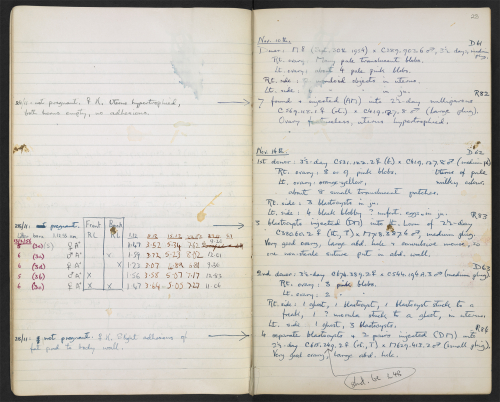 The notebook also showcases for scientific and non-scientific readers alike the human, material, and even quotidian processes that scientific advancement relies on. Just a quick browse of the pages emphasizes the years of painstaking work required to arrive at a breakthrough like the IVF mice, as well as showing some of the ways that McLaren systematically managed the dense information produced over those years (lumbar vertebrae counts appear in the notebooks in pink ink, for example, to make them stand out). Each page contains detailed observations, small corrections, and sometimes even notes like this, which records a short tale of an escaped mouse.

In addition to the written material, the pages bear traces of marks, spills, and stains that result from the unpredictable realities of laboratory work. Collectively, this notebook’s mosaic of material traces helps document scientific processes in ways that can be overlooked when looking at polished published papers.

As a PhD student at the University of Edinburgh, Bridget Moynihan’s research focuses on archival ephemera and digital humanities. These same interests led Bridget to undertake a British Library internship, researching the notebooks of Dr. Anne McLaren.