The Revolutions of 1848: an English translation of Russian socialist Alexander Herzen

A radical political thinker known as the ‘father of Russian socialism’, Alexander Herzen (1812-1870) witnessed first-hand the democratic and liberal revolutions that swept through Europe in 1848. Leaving Russia for Paris in 1847, Herzen soon became disillusioned with the uprisings which sought to replace European monarchies with republican government, but which resulted in the deaths and exile of thousands of people. His collection of essays ‘From the Other Shore’ explores the failures of the revolution. Originally written in Russian and sent to his friends in Moscow, he described the work as ‘a record of a strife in which I have sacrificed many things, but not the boldness of knowledge’ (‘To my Son’, Add MS 89364/1). 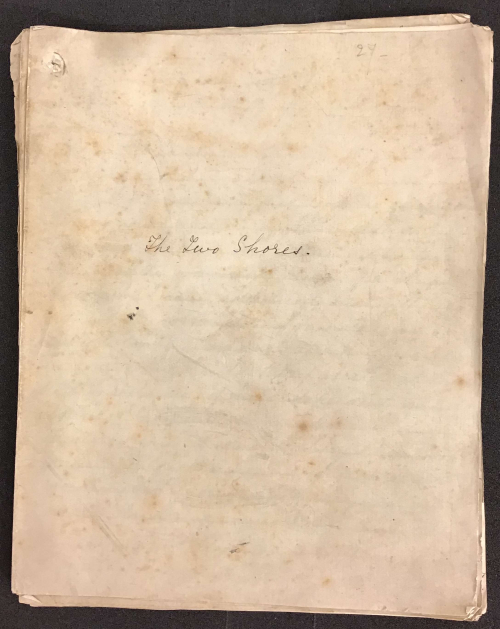 The British Library has recently acquired an English manuscript translation from the late 19th century entitled ‘The Two Shores’. Although unpublished and unsigned, the translation can been attributed to the English suffragist and writer Lady Jane Maria Strachey (1840-1928). A letter addressed to Strachey by her friend Mlle Souvestre refers to her translation of Herzen’s work (29 October 1874, 9/27/G/064, Strachey Letters, The Women’s Library, LSE) and this particular manuscript was sold from the papers of her son, Giles Lytton Strachey, in 2015.

Strachey was an active feminist with a keen interest in politics. She moved in literary and political circles that included George Eliot and the leader of the women’s suffrage movement, Millicent Fawcett. Bold and forward thinking, it is easy to see why Herzen’s essays appealed to Strachey. Her translation begins with Herzen’s address to his son Alexander, in which the revolutionary spirit of the work is clear:

‘I am not afraid of placing in your young hands the protest – at times bold to rashness – of an independent mind against a system which is obsolete servile & lying, against those absurd idols of former times which are now stripped of all meaning and are ending their days in our midst,
hindering some and terrifying others’. 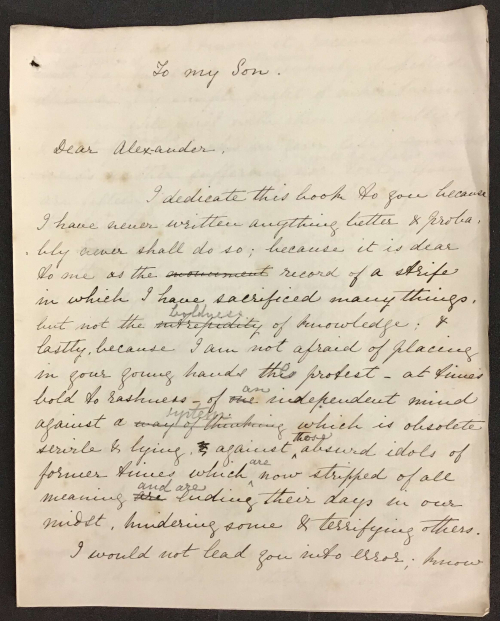 ‘To my Son’, Add MS 89364/2. Reproduced with permission from The Society of Authors as agents of The Strachey Trust.

Another passage articulates Herzen’s continued faith in socialist and individualist ideals – not dissimilar to Strachey’s own – despite his disappointment in the liberal revolutionaries:

‘… do not remain upon the shore of the old world – better perish, than seek safety in the hospital of re-action. Faith in a future social organisation is the only religion I bequeath you, it offers no paradise, & no rewards but those of our own Conscience’. As well as providing an insight into the translation process, then, this manuscript and its accompanying volumes also reveal the radical political reading of an important figure in the British feminist movement. It further hints at Herzen’s engagement with British intellectuals in London, where he lived during the 1850s and 60s, and the reception of his writing in British political thought.

All translations cited are from 'The Two Shores', an English manuscript translation of Alexander Herzen's ‘From The Other Shore’, Add MS 89364

By Sara Hale
Heritage Made Digital and Modern Archives and Manuscripts