Finding Mermanjan – the star of the evening Part 4

We’ve reached the final instalment in our story of Mermanjan.

Mermanjan, distraught at the sudden loss of her beloved husband, was taken in by a General and his wife who were fervent evangelical Christians.  They persuaded her to be baptised at Poona in December 1861 in the hope that she would meet Thomas in heaven. 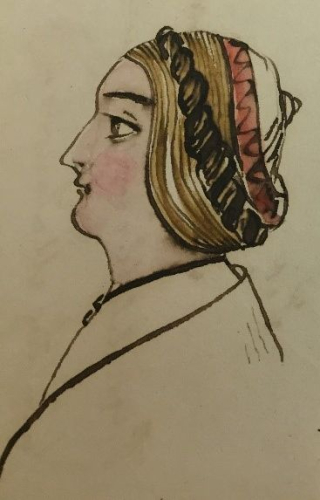 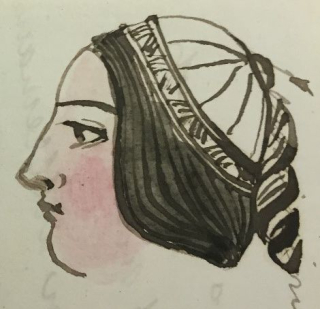 On 5 November 1863 Merrmanjan married an Irish Roman Catholic doctor Francis Ronanyne O’Kearney, who was attracted by the ‘comfortable little fortune left to her’ by Thomas.  This was no romantic relationship: ‘she told him plainly that her first husband held all her heart and always would’. During the early years of her second marriage she travelled and visited many of the capitals of Europe, but she found she was suffering from glaucoma and she eventually became totally blind.

My great-grandmother Beatrice became firm friends with Mermanjan after the Dimmocks were posted to Mahableshewar in 1889.  Beatrice wrote of the O’Kearneys: ‘relations were obviously strained, but the ill-sorted couple still lived together.  Little by little she poured her troubles into my ear, and occasionally I had a glimpse of the terrible violence of her anger against her husband, long unfaithful to her and becoming more and more insulting and indifferent to any attempt at disguising his feelings’.

Beatrice moved to Bombay in 1892. She soon received news that Dr O’Kearney had brought a charge of infidelity against Mermanjan and had  ‘lodged his complaint against her in the High Court of Bombay to obtain separation from her’.   The man named was a blacksmith with whom Mermanjan used to read the Koran, together with her Muslim house staff.  ‘The disgrace and disgust nearly turned her brain’ – she was 68 and the blacksmith only 25, a ‘low born workman!’.   She was confined to her room and followed by her husband and sister-in-law every time she left the house and was worried that she would lose claim to her belongings if she left without her husband’s permission. As she was blind, Mermanjan found a kindly librarian who wrote to Beatrice to ask for her help. 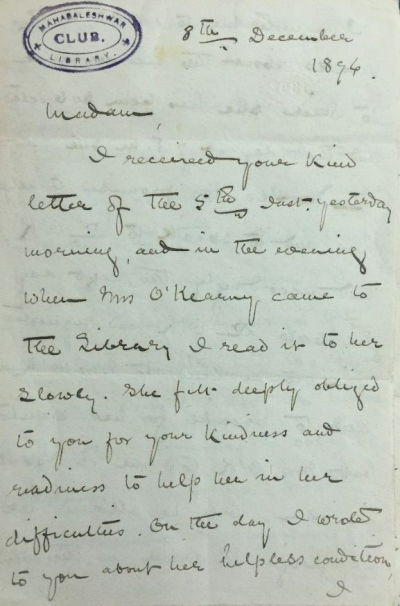 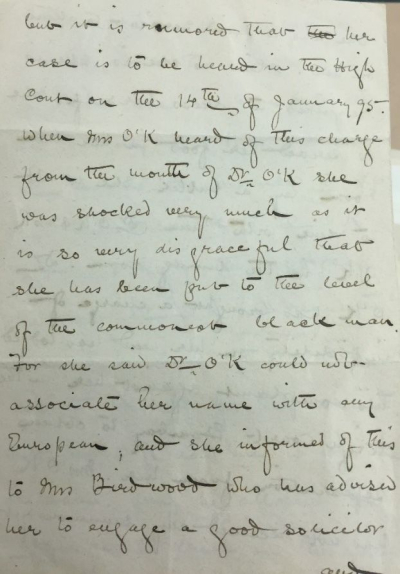 Mermanjan was grudgingly allowed to travel to Bombay to obtain legal advice with Beatrice’s help.  Eventually the case was settled out of court when O’Kearney realised that he ‘would simply be washing his dirty linen in public with no advantage to himself’.  He even expressed himself ‘willing to forgive and forget etc.’ but Mermanjan said that she did not want to see his face again. O’Kearney returned to Ireland and Mermanjan bought a small house in the hills at Satara.

Then Mermanjan’s health began to fail, and she became ‘querulous and irritable’.  It was not deemed acceptable for a Muslim woman to live apart from her husband so she wrote to O’Kearney forgiving him.  He joined her in Satara, though it was not a happy household.  O’Kearney died in 1911 after catching a cold.  Mermanjan died of heart disease in 1917, aged 84, and was buried by the side of her second husband.

Mermanjan’s treasured relics and papers were left to her friend Beatrice. She handed them down to her daughter Gertrude who pieced together the story: ‘Mermanjan, Star of the Evening,  who may  shine once more and the story of her life may light up those other lives, like the brilliance of an Indian sky at night, uncovering some small piece of the making of what was once an Empire’.