How old are you Miss Nightingale?

Florence Nightingale (1820-1910) was the famous nursing reformer, who improved conditions in the war hospitals of the Crimea during her time there (1854-56).  Patrolling the wards at night, she became known as the ‘Lady with the lamp’.  On returning to England, she continued her good work, using statistics as a useful tool. Dr William Farr (1807-1883) was a statistician and epidemiologist, who shared her passion for public health and statistics. They wrote to each other extensively for 20 years, from 1857 to 1877.  The British Library holds this correspondence in three volumes (Add MS 43398-43400).

One of the topics they discussed was the 1861 UK Census, in which Dr Farr was heavily involved.  They discussed the practicalities of collecting data;  for example, would landlords complete the census forms on behalf of their tenants?  The implication was that landlords would have to find out, or invent, potentially sensitive personal details such as age.  Florence joked that she must fill her own form in, as nothing would induce her to declare the age of her cats to her landlord.

There were columns to declare ‘Condition’ (we would now call it ‘marital status’), ‘Rank, Profession, or Occupation’, ‘Where Born’, and one asking ‘Whether Blind, or Deaf-and-Dumb’.  Florence believed there should be a column for ‘the number of sick people in each house and their Diseases’ and that the census should include details of ‘cellar and basement dwellings’ and ‘back to back houses’.

Florence lived at 30 Old Burlington Street, nominally part of a vast hotel but containing private family suites of rooms for long-term tenants, rather than overnight guests.  On census morning, Sunday 7 April, a junior hotel employee (‘fac-totum’) asked her to write her age, and that of her maid, on a bit of paper.  Outraged, she choked back her initial answer and, with admirable restraint, tried to ascertain the truth from ‘this person’.  It appeared the hotel was withholding forms from the resident families, instructing a staff member to fill them in, presumably using his imagination in the absence of accurate information.  They must have thought it amusing to knock on the door of the famous Florence Nightingale to ask her age.  Thankfully, Dr Farr had supplied Florence with her own specimen form, which she duly completed ‘fully & accurately’.

The incident is much better described in her own words, in this three-page letter: 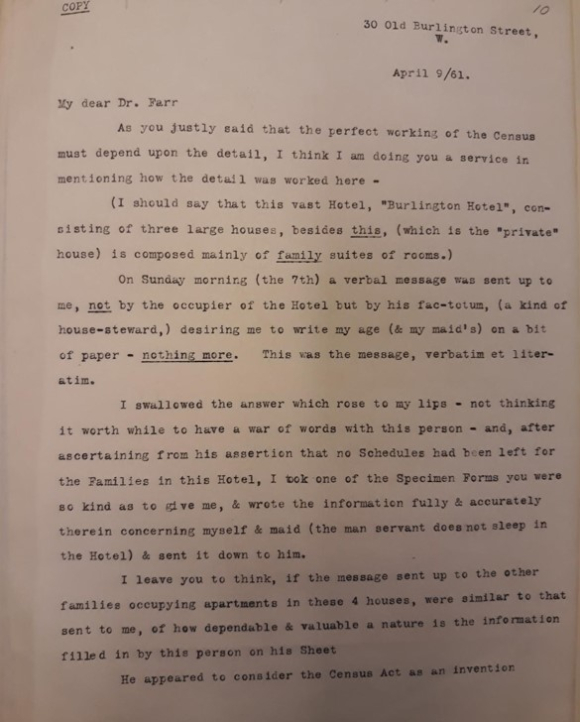 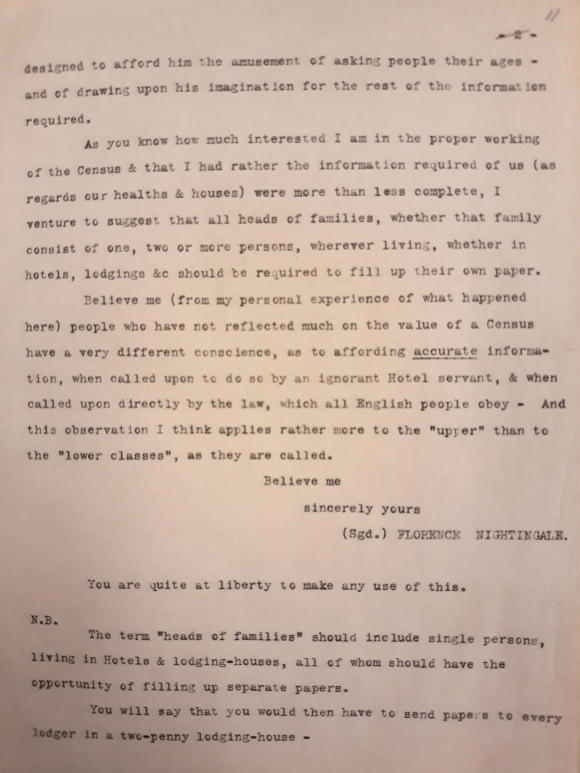 Farr’s two replies of 12 April acknowledged her ‘shabby treatment’ from the ‘somewhat brutal’ proprietor of the Burlington, saying hotels were the weak point when collecting returns and ‘something… must be done’ before the next census in 1871.  He passed her letter to his superior, Major Graham, who wrote Florence an unsatisfactory reply which entirely missed the point.

Here is the 1861 Census entry for Florence Nightingale and her housekeeper Mary Bratby (aged 40 and 48 respectively):

The 100-year embargo on access to censuses means that no-one listed would have seen their entry, but Florence Nightingale must have been confident that hers was correct!

Further reading:
British Library Add MS 43398-43400 Letters from Farr to Nightingale are originals in his handwriting. Nightingale letters to Farr are typewritten copies (originals are in the Wellcome Library, ref: MS. 5474).