Are women more faithful than men? An Eighteenth-Century Couple Discuss the Differences between the Sexes

In two slim volumes of collected love letters recently catalogued by the British Library (Add MS 89402), a young couple in the mid-eighteenth century discuss their private lives, family news and, above all, their love for one another.  Written between 1758-1762, the couple’s initial correspondence display a certain caution and reveal the discreet nature of their courtship; but over time their letters become longer and more intimate, eventually detailing plans for their wedding.  Though purposefully kept anonymous, the correspondents have now been identified as Francis Smyth (1737-1809) and Mary Plumer (1741-1824).

Yet, whilst they were deeply in love, Mary and Francis did not always agree – especially when it came to the subject of male fidelity.

In the spring of 1762, Francis and Mary discussed the differences between the sexes – particularly in relation to their faithfulness.  In a playful but sincere manner, the couple discussed the nature of courtship and cases of ‘jilting’, each mentioning friends who had sadly suffered heartbreak.  The exchange began after Francis detailed how a fellow student at Cambridge had been rejected by a woman who took a fancy to another man:
'I have much to tell you of my intimates in College, in the love way I have many stories but one I will tell you…a friend of mine has had a passion for a very pretty Lady for many years, & had the happiness of meeting with the kindest return to his Love. They had many meetings & were as much engaged to all appearance as two people could be…[but] about a week ago a new Lover offered, she accepted him, & discarded the old one without any concern, who is at present as unhappy as can be'.
(Letter 25, F. Smyth to Mary Plumer, 31 March 1762) 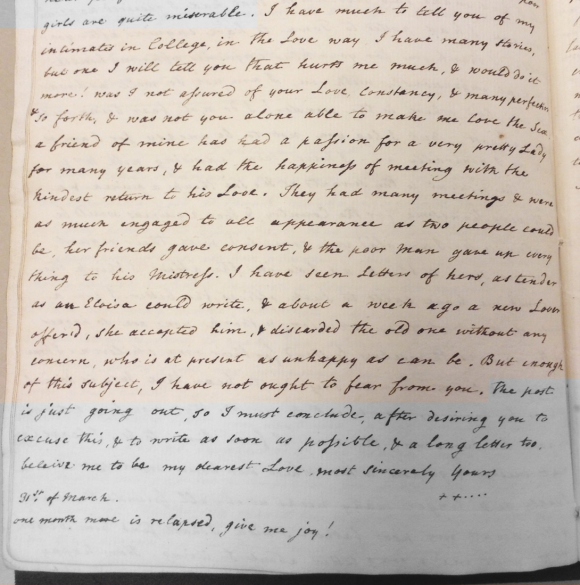 Though sympathetic to this young man’s upset, Mary protested that men were more inclined to be “false” than women:
' I am sorry for your friend’s disappointment, & to hear that there are such Women in the world, but for one of our Sex that are false, there are thousands of yours'.
(Letter 26, M. Plumer to F. Smyth, 2 April 1762)

Francis was dismayed by Mary’s generalisation about the unfaithfulness of men:
'I find we must still dispute! How could you blame the men as you do! to knock them down by thousands to one frail female is what I must resent!'
(Letter 27, F. Smyth to Mary Plumer, 4 April 1762)

Yet Mary was unconvinced and remained sceptical:
'I find you are obliged to take up arms in defence of the thousand poor men I knocked down (as you term it) don’t you believe there are Male jilts as well as female? I cannot say I can complain of the inconstancy of your sex to myself…but I have felt for my friends…[and] I will have done with this disagreeable subject... '
(Letter 28, M. Plumer to F. Smyth, 5 April 1762)

With that the matter ended.

Despite having differences of opinion regarding the faithfulness of men, Mary and Francis remained loyal to each other and were married six months later at St. Martin’s in the Fields on 26 October 1762.

Their love letters can now be read in full at the British Library.