Fourth ‘Queen’s Own’ Hussars in India

A small but unusual collection in the India Office Private Papers is a folder of ephemera of the British Army cavalry regiment, the Fourth Queen's Own Hussars.  The items in the folder are mostly related to the Regiment’s time overseas in the 1870s, and gives a fascinating glimpse into activities and entertainments when not on combat duties. 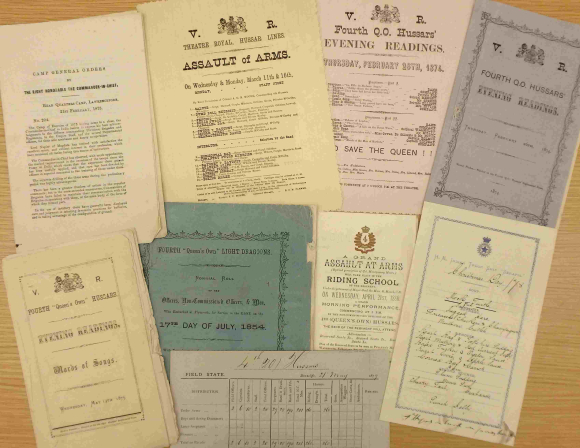 Raised in 1685 as Berkeley’s Dragoons as a consequence of the rebellion by the Duke of Monmouth, the Regiment would serve in many notable military actions, including Wellington’s Peninsula Campaign.  Renamed the Fourth Queen's Own Light Dragoons, the Regiment would spend 19 years in India between 1822 and 1841, and see action at the Battle of Ghazni during the First Anglo-Afghan war. 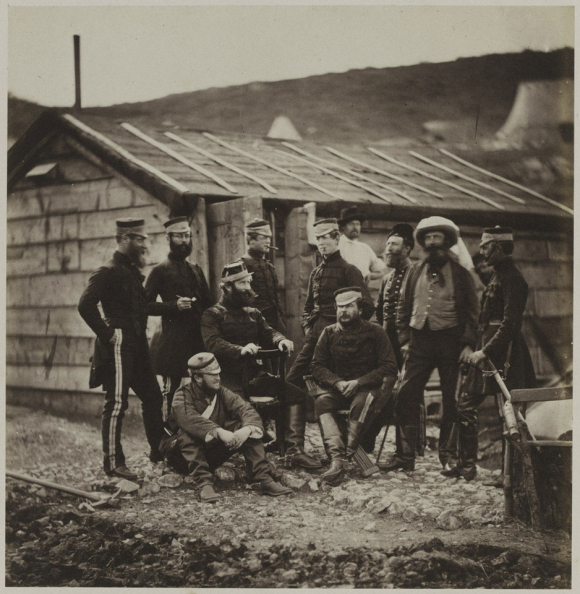 The Regiment also served with distinction during the Crimea War, and was part of one of the most famous events in British military history, the charge of the Light Brigade.  The Fourth Light Dragoons were in the second line of the charge on 25 October 1854 against the Russian forces at Balaclava.  Of the 12 officers, 118 men and 118 horses of the Fourth Light Dragoons, 4 officers, 54 men and 80 horses were killed, wounded or missing at the end of the charge.  One of the men of the Regiment, Private Samuel Parkes was awarded the Victoria Cross for his part in the charge.  The collection of ephemera contains a nominal roll of the officers and men of the Regiment who embarked on 17 July 1854, and Private Parkes is listed on page 7.  Parkes survived the charge and was captured by the Russians, spending a year as a POW. He was awarded his VC in 1857, and left the Regiment in December of that year. 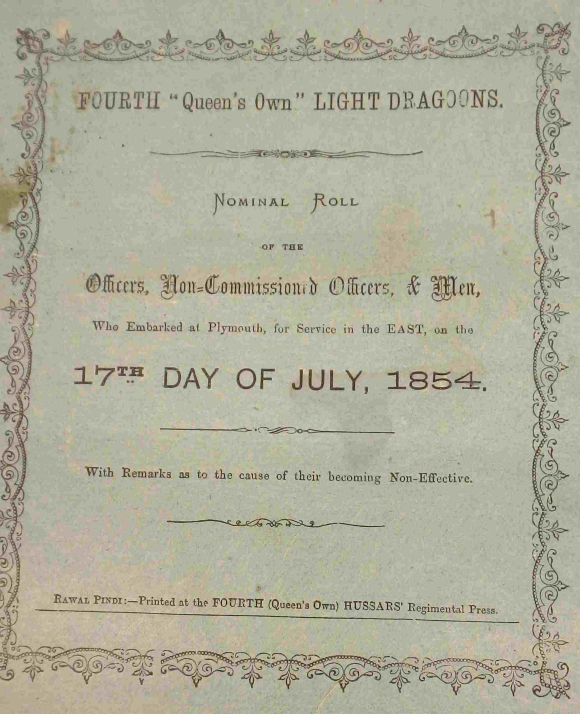 In 1867, the Regiment embarked on its second tour of duty in India.  Some of the most interesting pieces of ephemera in the collection from this period are programmes for ‘Evening Readings’ which the Regiment put on.  The programme for the evening readings for 26 February 1874, included the songs ‘They have laid her in her little bed’ sung by Private Fox and ‘A Life on the Ocean Wave’ sung by Corporal Walmsley.  Private Elliot gave a rendition of the comic song ‘Betsy Waring’. 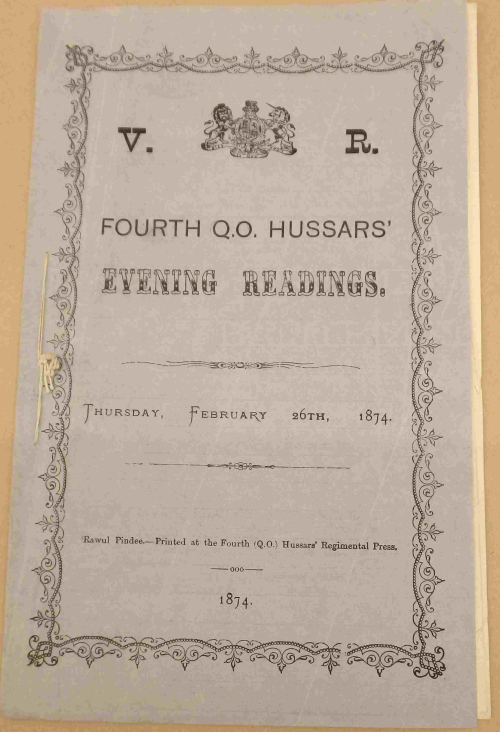 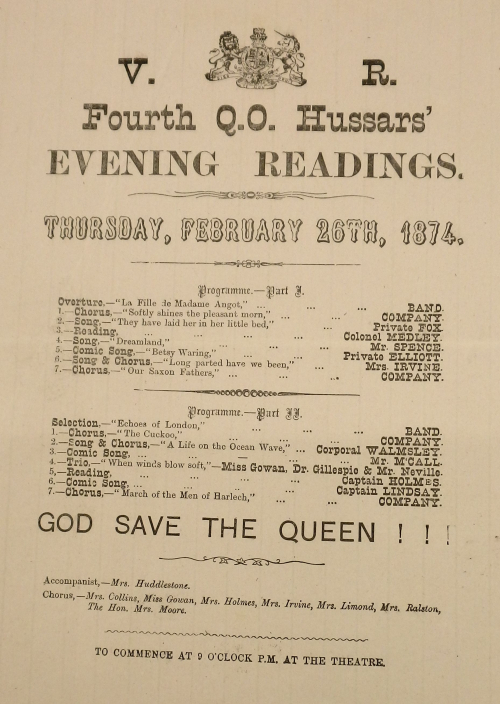 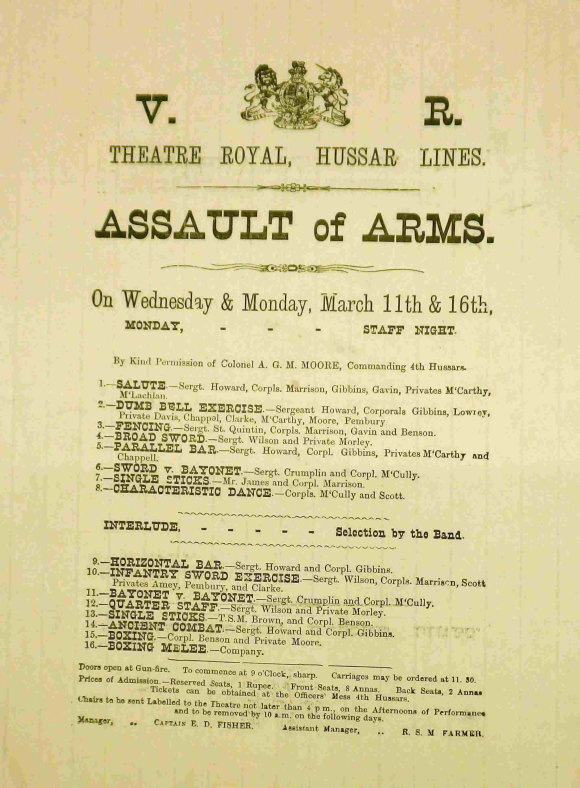 The Regiment left India on H.M. Indian troop ship Serapis on 6 December 1878 for the voyage back to England.  The collection includes the ship’s menu for Christmas dinner. 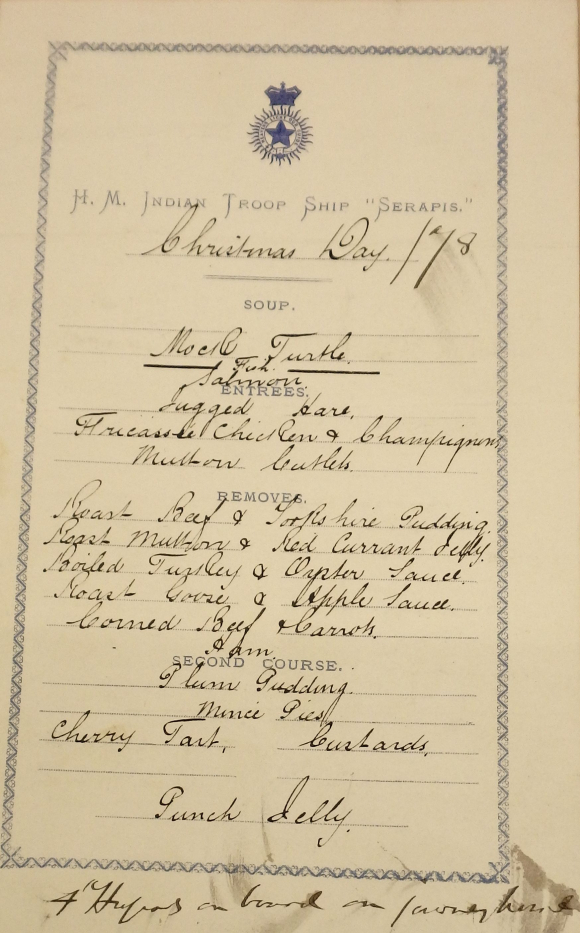 Exploits of the Queens Own Light Dragoons