Whilst browsing through a list of inhabitants of Calcutta in the 1790s one particular entry caught my attention.  In June 1794 a Russian musician by the name of Gerasim Lebedev was listed as a resident of Calcutta.  As it seemed unusual to find a Russian in India at that time, I was intrigued to learn more. 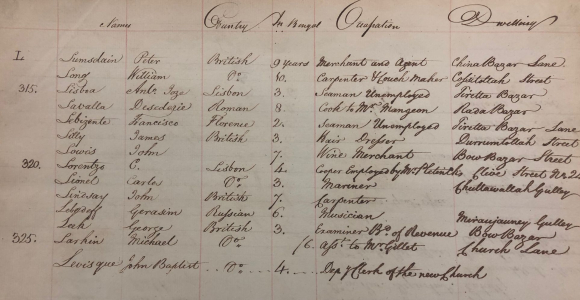 IOR/O/5/26 – Gerasim Lebedeff’s entry in a list of European Inhabitants in Calcutta, June 1794

Lebedev was born in Yaroslavl Russia in 1749, the eldest son of a church choirmaster.  The family later moved to St Petersburg where Lebedev sang in the choir, performed in theatre and began to learn English, French and German, also teaching himself to play violin.

In 1792 Lebedev accompanied the new Russian Ambassador to Vienna as part of a musical group.  However he left this employment shortly afterwards and began to tour Europe, earning a living as a violinist.

By February 1785 Lebedev was in England.  He sailed for India aboard the East India Company ship Rodney, arriving in Madras in August 1785 where he obtained the patronage of the Mayor, Captain William Sydenham, and earned a living putting on musical programmes.

In August 1787 Lebedev moved to Calcutta where he was to live for the next ten years, and where with the support of a Russian doctor he was able to establish himself as a musician.  Lebedev was interested in Bengali language and music and he is considered to be the first person to perform Indian music on western musical instruments.

In 1791 Lebedev was introduced to a teacher named Goloknath Das who taught him Hindi, Sanskrit and Bengali.  He used his new language skills to translate plays into Bengali and in 1795 he opened the first drama theatre in Calcutta.  The two plays he translated were Love is the Best Doctor by Molière, and The Disguise by M. Jodrelle.  They were performed on 27 November 1795 and again on 21 March 1796, with music composed by Lebedev himself and lyrics from a Bengali poet Bharatchandra Ray. 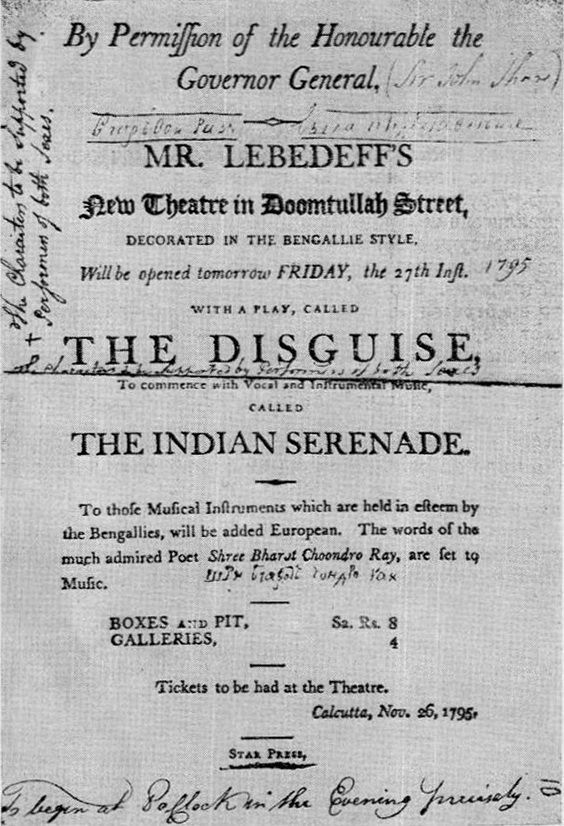 The shows were very well received and Lebedev received great encouragement from Calcutta society, including the Governor-General Sir John Shore.  The performances are today considered to be the first performances of modern Indian Theatre.  But Lebedev’s success was short lived as his theatre burned down shortly afterwards.

Lebedev was also involved in several disputes with both the British administration and one of his former employees and was asked to leave India in 1797.  Lebedev returned to London where he set about publishing works on the Indian Languages including A Grammar of the Pure and Mixed Indian East Dialects in 1801.

Lebedev returned to St Petersburg shortly afterwards and was still working there on publications on Indian languages in 1817 when he died at his printing house on 27 July 1817. 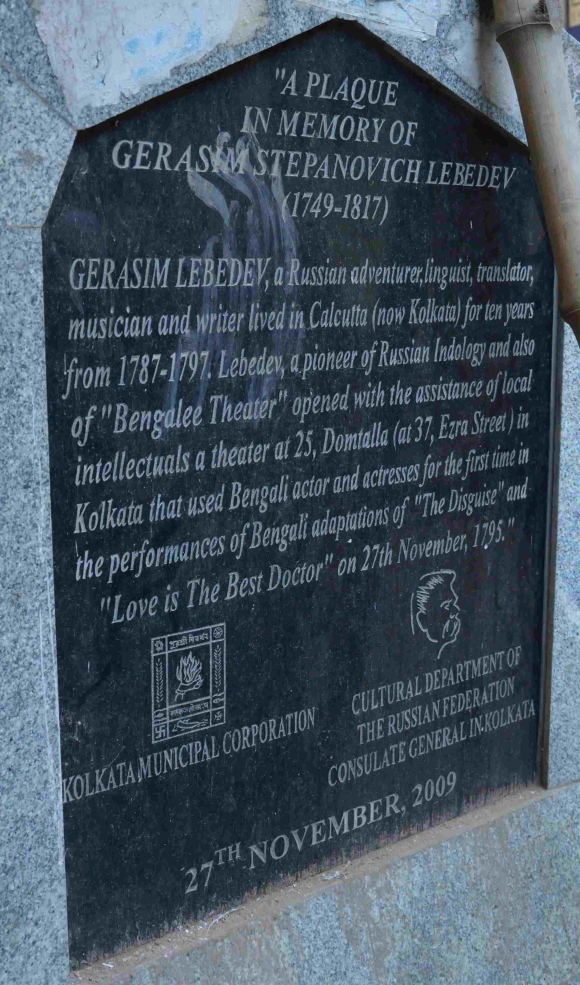 Plaque erected in Calcutta in 2009 to mark the location of Lebedev’s theatre. Image taken from Wikimedia. Attribution: By Biswarup Ganguly, CC BY 3.0

In 2009 the Kolkata Municipal Corporation and the Cultural Department of the Russian Federation Consulate in Kolkata erected a plaque in Ezra Street, Kolkata to commemorate the site of the pioneering theatre Lebedev had opened there in 1795.

Further Reading:
A Grammar of the Pure and Mixed East Indian Dialects, by Herasim Lebedeff (London, 1801) V4516.  (The introduction pp. i-viii gives a summary by Lebedev of his life up until the publication of this work.)
IOR/O/5/26 List of European Inhabitants in Calcutta, June 1794.

Posted by Margaret.Makepeace at 09:00:00 in Arts and crafts , Journeys , Music , South Asia