August being the month of national GCSE and ‘A’-level results, today’s post is about a set of examinations taken exactly a century ago.

After the end of the First World War it was widely recognised that demobilised servicemen needed to be found suitable employment.  In 1919-20 the India Office collaborated with the Civil Service Commission to offer a set number of places in the higher grades of the Indian Police Force to British subjects of good character born between June 1894 and August 1900 who had served in the conflict. 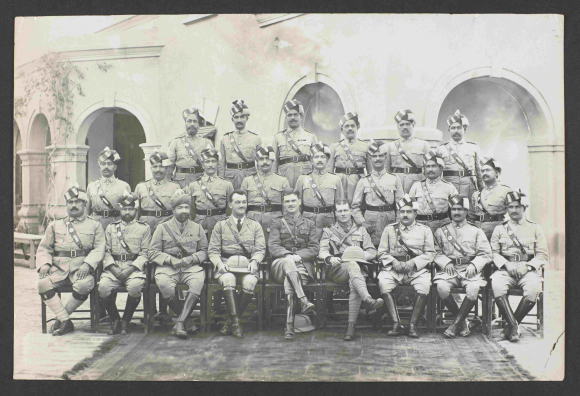 They did not, however, take in simply anyone who applied. The candidates were required to sit five papers in English, arithmetic and general knowledge, over nine hours in total, on 28 and 29 August 1919, and were expressly forbidden from trying to bring any undue influence to bear on the results:

‘Warning. Any attempt on the part of a candidate to enlist support for his application through Members of Parliament or other influential persons will disqualify him for appointment …'.

The English tests included making a 250-word precis of four pages of text, answering questions on extracts from Dickens and Sheridan, and writing an essay on one of the following:

1. Popularity as a test of merit.
2. The value of camouflage in military operations.
3. The advantages and drawbacks of official appointments in India, as compared with Home appointments.
4. An appreciation of President Wilson, or Mr Lloyd George, or M. Clemenceau.

Four out of twelve questions had to be chosen in the two hour general knowledge paper, such as

The (anonymous) examiners marked the papers from A+ to C-.  A total of 70 brave applicants took the examinations, of whom 52 were selected for interview. While the answers submitted have not survived, the leading candidate was undoubtedly J.E. Reid, whose efforts garnered a range of A grades (including the only A+ awarded, for general knowledge), whereas the hapless A.R. Anderson and E.T. Everett could only muster a variety of C’s.  The examiners considered E.I. Wynne-Jones’s essays worthy of only a C+, but he managed A’s and A-‘s in everything else.  Mercifully B.M. Mahony, E. Allenby-Peters and W.N.C. Scott never knew how close they came to passing, their mix of B and B- grades just failing to better the efforts of F.W. Cresswell, R.A. Foucar and R.W. Jewett, who each gained one precious B+.

Little is known of the careers of the successful candidates, but let us hope that Mr. Reid’s opinion of President Wilson, and his knowledge of former German colonies, later helped him to catch lots of criminals in India.