Today, 16 August 2019, marks the two hundredth anniversary of the Peterloo Massacre – a major event in British history in which dozens of peaceful protesters were killed and hundreds injured when Yeomanry cavalry charged into them as they rallied for parliamentary reform. 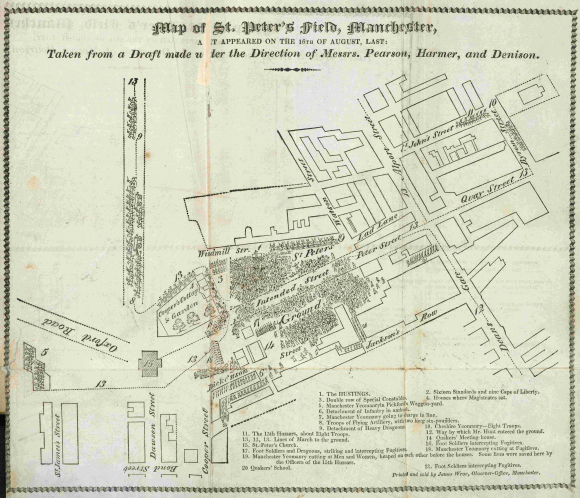 On 16 August 1819 thousands of political protesters met at St Peter’s Fields in Manchester to campaign for parliamentary reform.  They sought a widening of access to the vote and a more democratically accountable Parliament.  It is estimated that somewhere between 60,000-100,000 people gathered at the meeting.  A large draw for the crowd was the speech of the noted radical and orator Henry Hunt (1773-1835).  Concerned that his words might incite a riot the Manchester magistrates ordered the local volunteer Yeomanry to arrest him.  Inexperienced in crowd control, the Yeomanry rode into the crowd with their swords drawn followed by the 15th Hussars who sought to disperse the crowd.  Hunt was arrested, but in the process at least eleven people were killed and many hundreds were wounded. 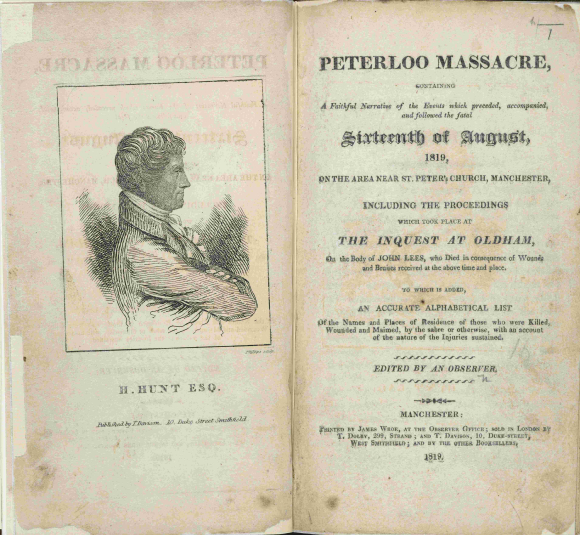 Portrait of Henry Hunt, and title page of Peterloo Massacre, containing a faithful narrative ... Edited by an Observer (Manchester, 1819) 601.aa.9.(1)

Though the magistrates were officially praised by the government for their actions, there was an immediate national outcry as news spread of the attack.  Very quickly the event was derisively dubbed as ‘Peterloo’ scornfully comparing it with the Battle of Waterloo.  There was considerable public sympathy for the protesters and, for decades after, Peterloo was invoked by radicals as a powerful symbol of political corruption, working-class oppression and the need for parliamentary reform.

One author who was particularly appalled by the Peterloo massacre was the radical poet Percy Bysshe Shelley (1792-1822).  Shelley was living in Italy when the news reached him.  In response he drafted his, now famous, poem ‘The Masque of Anarchy’.  According to Shelley ‘the torrent of my indignation’ flowed into the work and throughout his anger is tangible.

The poem gives an apocalyptic vision of a Regency England in political crisis.  Shelley describes several monstrous creatures riding upon horses wearing masks that look like leading politicians.  Taken together they personify murder, hypocrisy, and fraud and they parade a final beast: anarchy.  The poem then describes a ‘maniac maid’ called Hope, though ‘she looked more like Despair’.  Like the protestors at St Peter’s Fields,  Hope is about to be trampled under the horse’s hooves when ‘a Shape arrayed in mail’ rises to defeat the monstrous creatures.  ‘A great Assembly…Of the fearless and the free’ is then described, like the crowd at Peterloo, and a voice is heard advocating freedom and imploring the people to rise up for liberty.  Famously, the poem ends with the rallying cry:

‘Rise like Lions after slumber
In unvanquishable number—
Shake your chains to earth like dew
Which in sleep had fallen on you—
Ye are many—they are few.’ 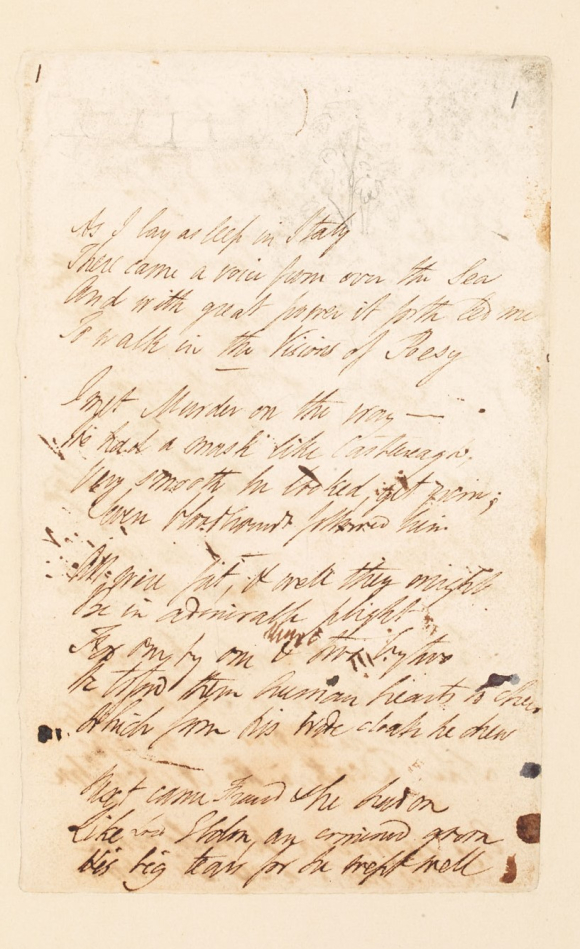 The British Library holds the original manuscript of Shelley’s ‘The Masque of Anarchy’. It was never published in his lifetime. After writing the poem, Shelley sent a copy of it to his friend Leigh Hunt (1784-1859) who felt that it could not be published safely following government censorship in the aftermath of Peterloo. Others also refused to publish the poem and it did not come out in print until 1832.

Posted by Margaret.Makepeace at 09:08:22 in Conflict , Literature , Manuscripts , Politics , Reform

Posted by Margaret.Makepeace at 9:08 AM