George Street (1867-1936) became Examiner of Plays in 1914.  Street was already a published journalist, critic and novelist.  He wrote summaries of every play he read leaving behind a valuable historic record of the topics that were of most concern to the censor at the time.  Chief among these concerns was the increasing discussion of women’s rights and sexual autonomy in plays submitted for licensing. Maternity was written by Eugène Brieux and translated by Charlotte Shaw.  The play examined the theme of choice in parenthood and voiced the grievances of a woman expected to continue having children.  The result was the woman’s death during an abortion.  This ending prompted the examiner to consider whether it was useful to license the play, as it would serve as a warning to women, but he decided against this stating:
‘I do not think this play can be justified as useful propaganda…the subject of abortion has not so far been allowed on our stage, and is not so treated, in my opinion as to serve a useful purpose..’

In 1923, Street refused a licence for a play entitled Married Love.  This was a fictional adaption of Marie Stopes’ book of the same name.  The play explored themes of sexual satisfaction within marriage.  The play was quickly refused with this damning conclusion:

Shortly after the submission of Married Love, Stopes submitted a play entitled Our Ostriches (initially named The Ostriches) under her own authorship.  The play considered the merits of birth control and advocated for women to have more agency in deciding how many children to have. 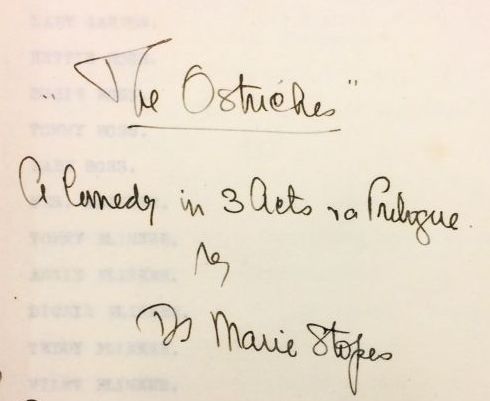 Street deemed the play less aggressive in its views than other plays and actually recommended it for licence with certain omissions.   However, the Lord Chamberlain was less sympathetic and he refused it a licence.

Anniversary by Frederick Witney presented a different problem to the censor.  The play was an honest portrayal of a woman on the day of her divorce considering her past and present loves.  It was candid in its female-centred view of an intimate relationship.  Street refused its licence on the basis that:
‘its general freedom of discussion and intimacies are more than is generally allowed on the English stage’.

The play entitled Alone offered another perspective on female desire.  Authored by Marion Norris, it was a rewrite of the banned novel The Well of Loneliness by Radclyffe Hall. Description of the Protagonist based on the character of Stephen in The Well of Loneliness 1930, Add MS 68834 B

Alone was refused a licence because of its lesbian theme, but not before Street summarised the anxieties of his age with this statement:
‘I think people are indifferent to the abnormality in women with which it deals until it becomes aggressive…’.

These plays all faced censorship because their content presented women’s sexuality or agency in an affirmative rather than submissive way.  Despite George Street’s best efforts, such themes could not be hidden from view and women continued to make their voices heard on the stage.