Intrigued by a catalogue description, I investigated the baptism register which survives for the chapel of the Royal Indian Engineering College at Cooper’s Hill, near Egham Surrey.  It covers the years 1897-1904 and contains just ten entries for the children of men who worked for the College. 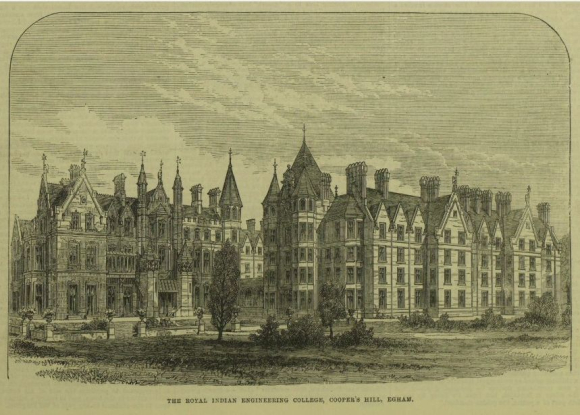 Charles Bushby McElwee was Assistant Instructor in Geometrical Drawing 1892-1906.  In December 1894 he married Alice Henrietta Flynn. Their two sons were baptised at the College: Charles Frederick on 4 April 1897, and Arthur Henry on 26 November 1899.

When the College was closed in 1906, McElwee returned to his native Ireland, working in Dublin as the organiser of drawing instruction for Commissioners of National Education.  Daughter Eileen Dora was born in 1909.  Tragedy struck when Charles Frederick died of pulmonary tuberculosis on 17 February 1915 aged 18, and Arthur Henry died in 27 December 1919 of ‘pneumonia meningitis’ aged 20. 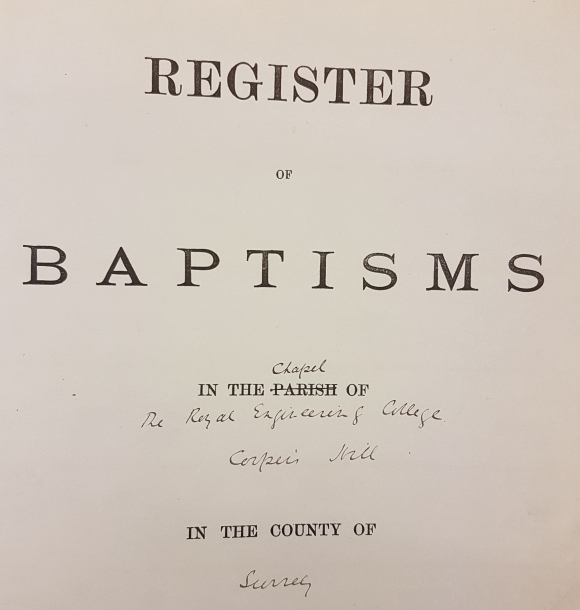 Alfred Lodge was Professor of Pure Mathematics at Cooper’s Hill 1884-1905.  He and his wife Winifred Ada had six children during that time including Kathleen Elizabeth who was baptised at the College on 2 June 1898.  In September 1904 Lodge resigned to teach maths at Charterhouse School.  Kathleen later trained as a nurse, whilst her sisters became a music teacher and an illustrator. One of her brothers became a tea planter in India, and the other two emigrated together to Australia.

Frank William Harbord worked as an analytical chemist at the College 1892-1906.  The baptisms of two of his six children with his wife Marian are in the register: Marian on 14 November 1898 and John Gilbert on 28 February 1904.   The Harbord family stayed in Englefield Green after the College closed.  Frank worked as a consultant metallurgist and was one of the pioneers of the mass production of steel in Britain. 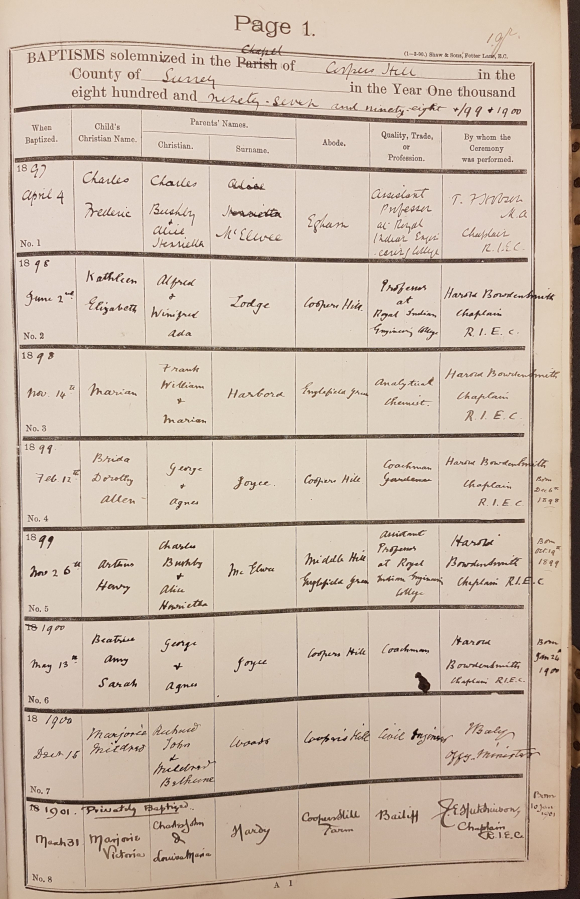 George Joyce was the coachman at Cooper’s Hill.  He lived with his wife Agnes and five children in the stables there. Brida Dorothy Allen was baptised at the College on 12 February 1899, and her sister Beatrice Amy Sarah on 13 May 1900.  After the closure of the College, George worked as a fly driver in Egham.  His son George Ashley was killed in action in May 1915 when submarine HMS Recruit was sunk by a German U-Boat.

Richard John Woods worked at the College 1894-1904, rising to be Assistant Professor of Engineering.  He had previously served in the Public Works Department in India.  In 1893 Woods married Mildred Bethune Taylor, daughter of General Sir Alexander Taylor, President of the College.  They had two children.  Daughter Marjorie Mildred was baptised at the College on 15 December 1900.  She married Lionel Westropp Jardine of the Indian Civil Service. 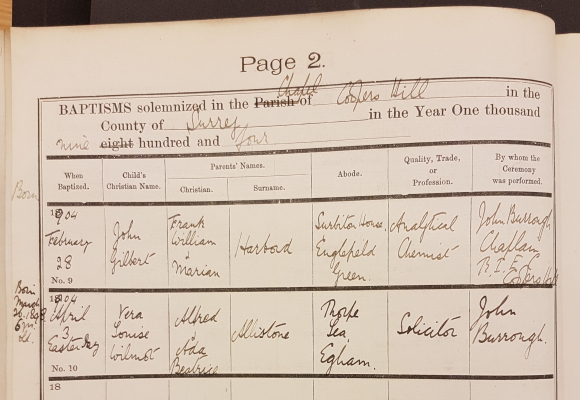 Charles John Hardy was the farm bailiff at Cooper’s Hill 1900-1906. His wife Louisa Maria was paid for looking after the chickens and eggs and for making butter.  Their daughter Marjorie Victoria was baptised privately on 31 March 1901.  She died in 1902.  After the College closed, Charles Hardy was farm bailiff for Bexley Asylum.

The last entry in the register is the baptism on 3 April 1904 of Vera Louisa Wilmot Allistone, the six-year-old daughter of Alfred and Ada Beatrice.  Alfred Allistone was a solicitor living in Thorpe Lea, Egham.  Presumably he worked on behalf of the College.  By 1911 the family had returned to London.