The Great Fire of London and the East India Company

On the morning of 2 September 1666, the Great Fire started its sweep through the City of London.  Some idea of the effect of the Fire on the East India Company headquarters in Leadenhall Street is provided by the petty cash accounts of its Secretary John Stanyan.  Large quantities of goods were moved to safety. It was thirsty work judging from the number of entries for the cost of drinks! 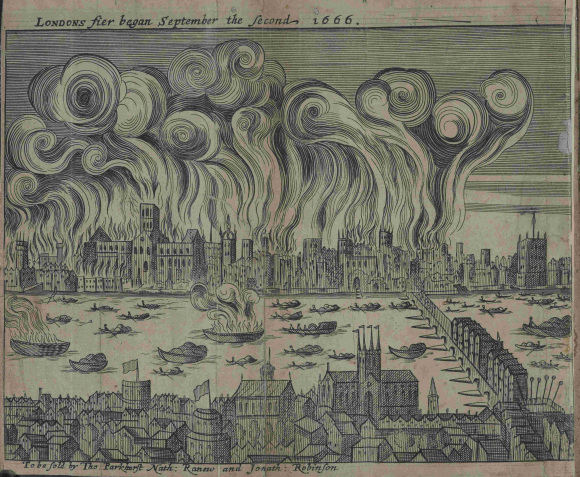 2 September 1666
Given to musketeers who guarded the warehouse door when Mr George Day came to demand his goods, fearing they would be burned in Leadenhall - 5s

3 September 1666
Given to Red Coats who pressed carts to carry goods from Leadenhall to Blue Warehouse at St Helen’s – 3s 6d
Drink for the porters and for myself and Captain Proud – 2s
Drink for men at the pump and women sweeping the kinnell [gutter?] – 3s
Paid 6 men pumping all day – 12s
Cartage of 52 bales of cloth from Leadenhall to Blue Warehouse @ 12d per bale -  £2 12s

The accounts then return to their normal pattern of expenditure.