Crystal chandeliers for the Shah of Persia

In 1819 the Persian Ambassador Mirza Abul Hassan Khan arrived in London on a diplomatic mission from the Shah of Persia.  He bore gifts of jewellery, ornamental swords, beautiful rugs, carpets and paintings, and Arabian horses for the King and Prince Regent - an image captured by the artist Henry Chalon. 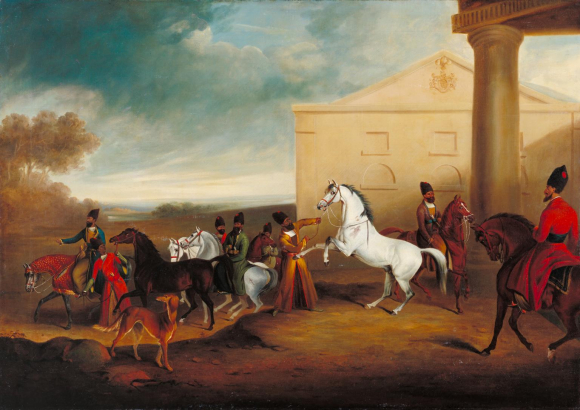 Henry Bernard Chalon, A Representation of the Persians in the Costume of their Country Attending at Carlton Palace with Portraits of the Horses Presented to His Majesty by the Ambassador from the Emperor of Persia  (1819?), Tate (T02357) digital image © Tate released under Creative Commons CC-BY-NC-ND (3.0 Unported)

Relations between Britain and Persia were cordial, the countries having signed a treaty of alliance in 1812, but the situation was sensitive due to the possibility of Russian expansion into Persian territory.  As part of the diplomatic dance, reciprocal gifts were commissioned for Fath Ali Shah.  ‘As a pledge of the continuance of our respect, we shall send by way of Bombay some of the productions of this Country, which … we trust will be accepted as a further indication of the sentiments with which we are impressed’ wrote the East India Company Court of Directors in March 1820. 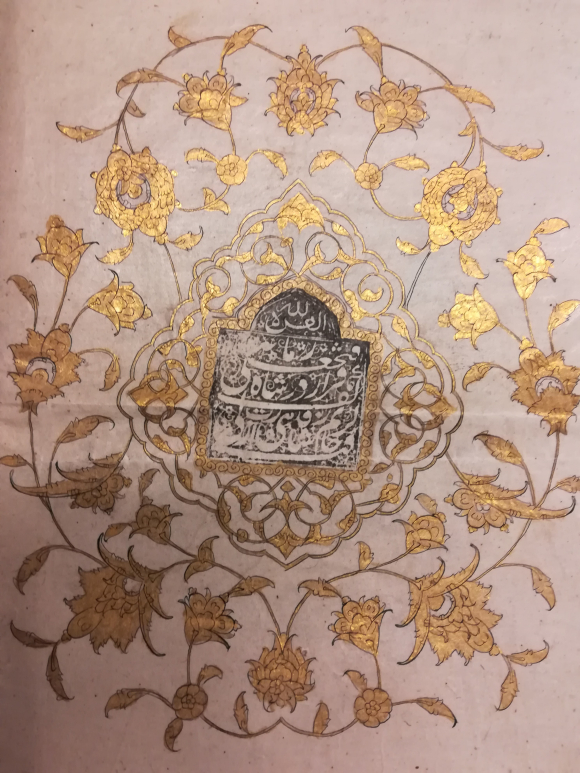 Blades & Co., Royal glassmakers of Ludgate Hill, crafted 'lustres' or suites of candelabra to be delivered to the Shah, intended to decorate the newly refurbished Golestan Palace in Tehran.   At the behest of John Blades and with the permission of the East India Company, Edward James Matthews set sail from England to Bombay in October 1820, tasked with accompanying the cases of fine glassware.

Transporting fragile and highly breakable items to Persia was a tricky business.  Having arrived safely in Bombay, Matthews was instructed to take the eighteen cases to Bushire on the Persian coast.  He travelled on the Frances Warden, arriving in early August 1821.  Henry Willock, the Chargé d'Affaires at Tehran wrote to Matthews requesting that he oversee the onward transport of the glassware and installation of the chandeliers.  ‘I have to request that you will remain at Bushire until the arrival of the Persian Officer who will be charged with their Transport, and I have further to beg that you will accompany their progress to the interior and strive by every Act of Necessary precaution to secure their preservation’.

It is over 750 miles overland from Bushire to Tehran.  It proved impossible to transport the cases by cart, so Matthews arranged for them to be carried on men’s shoulders the whole way.  The journey took five months – ‘an undertaking of infinite difficulty… I may say danger’. Thankfully the glassware arrived intact, and was ‘most graciously received by the King.  His Majesty expressed his approbation and praise of the great care and diligence evinced by Mr Matthews’.   Letters of thanks from both the Shah and Mirza Abul Hassan Khan arrived back in London with Matthews, together with a gift to the Company of the Shah’s portrait. 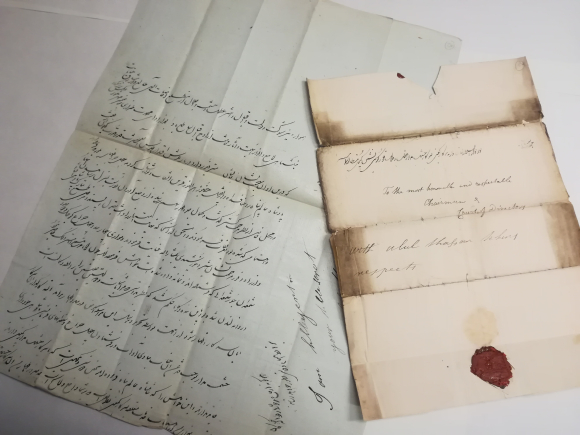 Letter in Persian from Mirza Abul Hassan Khan to the Chairman and Deputy Chairman of the East India Company, giving thanks for gifts of lustres sent to the Shah, [1823]. [IOR/L/PS/189, ff 23-24]

The return leg of Matthews’ journey proved eventful. He travelled to St Petersburg via Tabriz, but was shipwrecked in the icy waters of the Baltic in December 1822.  Illness confined him to Oesel Island (Saaremaa) for 4 months, until he finally reached England in June 1823, a journey of ‘2 years, 7 months and 23 days’. 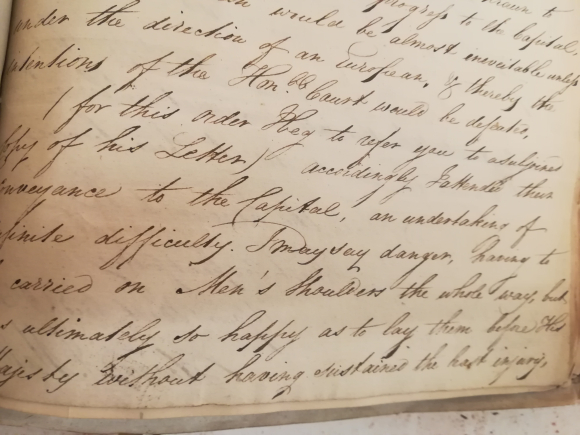 As a result of his efforts, Matthews was awarded the badge of the Lion and the Sun by the Shah, and Blades and Co. were awarded a Royal Warrant from the Persian Court.  Much of the correspondence from Matthews in the India Office Records pertains to his attempts to get the Company to reimburse him for his out of pocket expenses.  A warrant to pay him £368 and 7 shillings was finally made on 26 Sep 1823.