Dr Johann Helfer and the curious case of an unexplained footnote

There is a reference to Dr Johann Wilhelm Helfer in C R Low's three-volume A History of the Indian Navy 1613-1863. The reference itself relates to Helfer's role as naturalist to Francis Rawdon Chesney's Euphrates Expedition in 1836; however it is a footnote next to his name which is most intriguing:

“Dr. Helfer, while on a scientific expedition for the Indian Government, was murdered at the Andaman Islands on the 31st January 1840, when his heroic wife shot the assassin dead with her pistol, an act worthy the niece of Field-Marshall Von Bulow”. 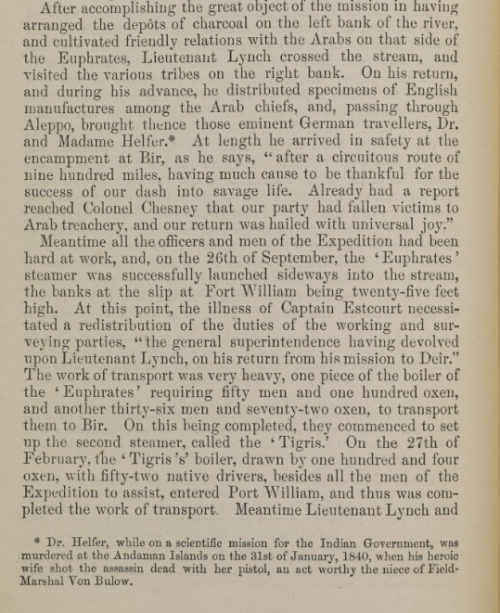 Being intrigued by the notion of his wife Pauline des Granges, later Countess von Nostitz, (who was apparently a niece of Field-Marshall Baron von Bülow) having avenged her husband’s death I decided to look in more detail at this story.

In 1878 The Countess published an account of her life and travels with her husband Dr. Helfer, which included a chapter on his death in the Andaman Islands in January 1840.

This account however revealed that not only had the Countess not shot and killed her husband’s assassin, she had not even accompanied him on his expedition, having chosen to remain at their estates in Mergui, Burma. 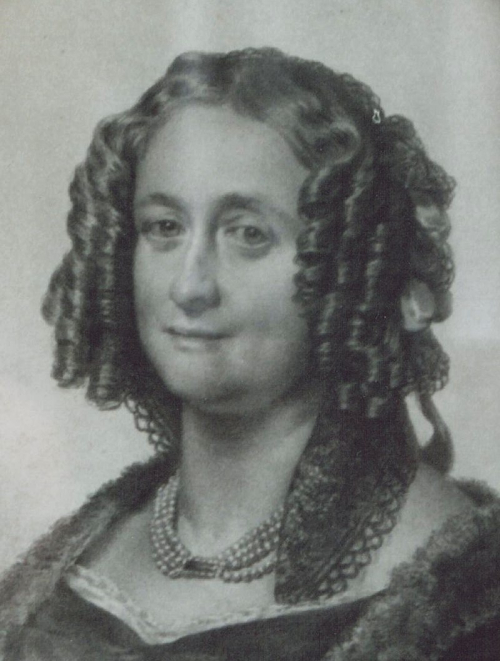 Where this strange reference to such a tall tale came from is unfortunately a mystery.

Dr. Johann Wilhelm Helfer (1810-1840) was a naturalist employed by the East India Company who was also an avid collector of ornithological and botanical specimens which he donated to various institutions across the world.

The Helfers were avid travellers and were passing through Syria when they were asked to assist Colonel Chesney and accompany the Euphrates Expedition to Bussora. Helfer was subsequently appointed in 1837 as a Naturalist in Mergui and Tenasserim and was instructed to undertake surveys and reports on the natural resources there. His reports being approved of his employ was extended in March 1838, and by January 1840 he had written four lengthy reports on the resources he had discovered. Official letters following his death, describe his work as follows:

“These documents are equal in interest and value to the former reports of this intelligent and enterprising naturalist whose melancholy fate in prosecution of his researches we greatly lament”. [IOR/F/4/1852/78316] 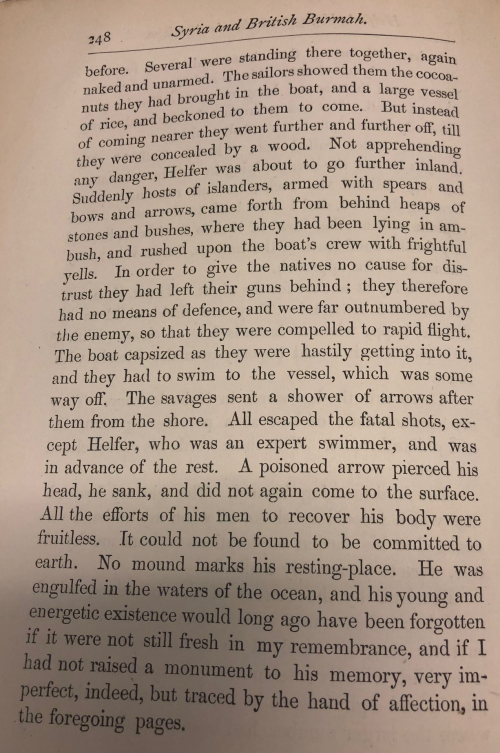 Mathilde Pauline Nostitz, Travels of a Doctor and Madame Helfer in Syria, Mesopotamia, Burmah and other lands, (London: 1878)

According to Mrs Helfer, her husband’s expedition to the Andaman Islands had been to try and learn more of the resources and items for trade with some of the occupants of the smaller islands and it was in the pursuit of this that he was killed. Her account states that he had encountered a small number of locals and was keen to see their wares so had followed them across the beach towards the treeline where his party were ambushed. They fled back to their boat, attempting to dodge arrows laced with poison, but Dr. Helfer was struck in the back of the head whilst in the water and was reported to have sunk beneath the waves, with his colleagues and servants unable to recover his body. His was the only casualty. According to one obituary he was the first scientist to have reached these smaller parts of the Andaman Islands.

Travels of Doctor and Madame Helfer in Syria, Mesopotamia, Burmah and other lands, narrated by Pauline, Countess Nostitz (formerly Madame Helfer), and rendered into English by Mrs George Sturge, in two volumes. London (1878)

IOR/F/4/1735/70256 - Employment on a survey of the natural resources of Tenasserim, including his printed account of Amherst District

IOR/F/4/1608/64733 - Appointment as Naturalist at Tenasserim for 6 months, includes account of his journey from India -

Diaries of Dr. Helfers's Voyages in the Mergui Archipelago and Andaman Islands, 1838-40

Posted by India Office Records at 09:37:38 in Journeys , Science and environment , South Asia

Posted by India Office Records at 9:37 AM