Advertisements in the Calcutta Gazette of 12 March 1795 alerted readers to the arrival of the East India Company ship Royal Admiral with private trade goods to sell.   Private or ‘privilege’ trade was allowed to the captains, officers and crew of East Indiamen on a sliding scale of cargo space and value based on rank.  Mariners tended to concentrate mainly on items of high value but low volume. 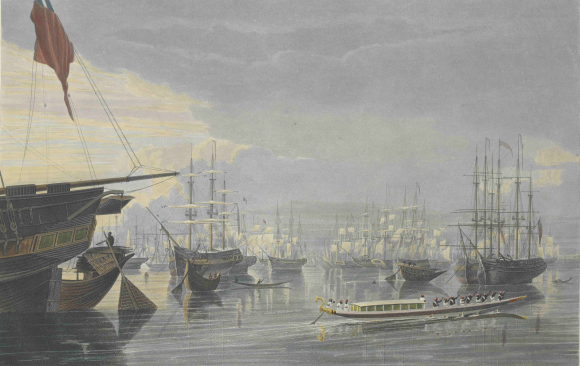 The firm of Tulloh, Henchman, and Innes in Calcutta begged leave to inform their friends and the public that within the next few days they would be offering for sale on commission at their warehouse ‘the large, elegant, and well chosen Investments‘ brought from England by Essex Henry Bond, Captain of the Royal Admiral, and William Fairfax, his chief officer.

Dring, Cleland and Co were offering by private sale Madeira wine imported in the Royal Admiral.  Bucking the trend for non-bulky goods, Steuart, Maudslay and Gordon alerted readers to the arrival of a number of elegant London-built carriages on board the Royal Admiral – chariots, phaetons, gigs and buggies.  They were also selling saddlery, superior in ’variety, taste and fashion’.

There are several advertisements in that issue of the Calcutta Gazette offering European goods just arrived in other East India ships.  The auction houses vied for custom and the buyers had the luxury of choice.

Further reading:
British Newspaper Archive
H V Bowen, ‘Sinews of Trade and Empire: The Supply of Commodity Exports to the East India Company during the Late Eighteenth Century’ in The Economic History Review, Vol.55, No.3 (Aug 2002)