The Portuguese Militia in Bombay

An almost certainly little-used publication on the shelves of the Asian & African Studies Reading Room sheds intriguing light on the existence and composition of a non-British military force in Bombay in the first decade of the 19th century.

In the Bombay Kalendar and Register for the year 1806 can be found a ‘List of officers of Portuguese militia’, their Commandante being identified as Sir Miguel de Lima e Souza.  There follows the names of three Sub-Commandantes, eleven Capitaens, and forty Tenentes (Lieutenants), all bearing recognizably Portuguese names such as Antonio Nunes, Matheus da Silva, Aleixo Gonsalves and Manoel Pereira.  That they were wholly loyal to the East India Company can be deduced from the fact that the Colonel of the force was none other than the Honourable Jonathan Duncan, the Governor of Bombay, alongside Regulating Officer Captain William Green, Adjutant Lieutenant D. Stewart and Assistant Surgeon R.B. Perrin.

A volume of Bombay Military Statements contains a ‘Separate statement for the Regiment of Native Portuguese Militia’.   It reads: ‘This Corps is composed of the native Portuguese inhabitants on the Island of Bombay and consisted of 10 companies [on 30 April 1800]. They were there learning to Exercise and received no pay'. 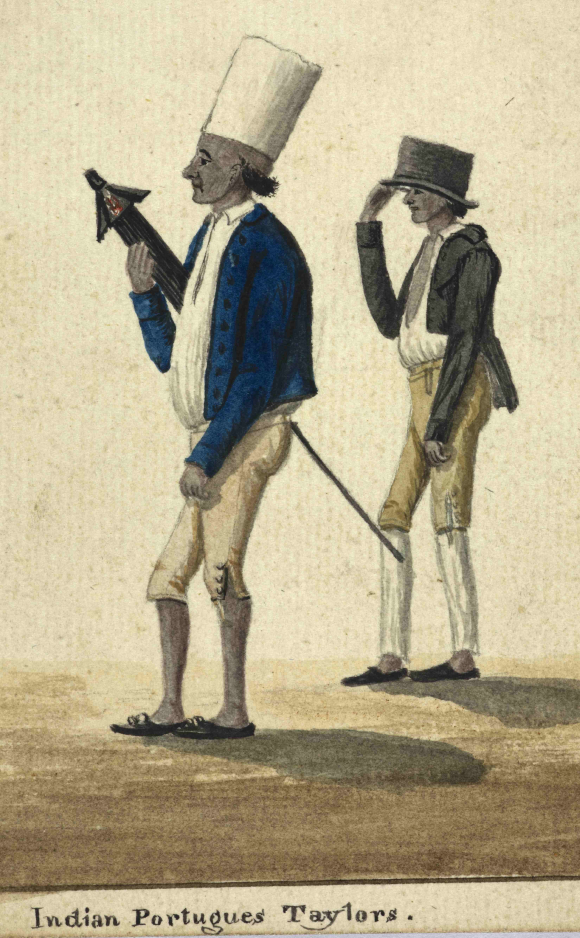 This is not to say that no expenses were involved.  A force of just over 1,000 men could not possibly have been called into existence without funding – 1 Commandant, 3 Sub-Commandants, 10 Captains, 20 Lieutenants, 40 Serjeants, 40 Corporals, 20 Drummers and Fifers, no fewer than 960 Privates and 2 Puckallies (water carriers).  The training of the troops was overseen by fifteen professional soldiers drawn presumably from the ranks of the Company’s Bombay Army, assisted by two carpenters, two smiths, a ‘hammerman’, a bellows boy, a polisher and a shoemaker.  The pay of these staff, together with other incidentals such as ‘tobacco money’, meant that the Company had to stump up almost 1,100 rupees.

Portugal had gifted Bombay to the British Crown as part of the dowry of Queen Catherine of Braganza in 1661.  The Bombay Portuguese Militia was first raised in 1672 and existed until 1827.  There was a similar, presumably smaller, Portuguese militia at Tellicherry further down the coast in the Madras Presidency.  However the archives yield tantalisingly little additional information about the Bombay force and it is not mentioned in the Military Statements after 1811.  Sir Miguel was awarded an annuity of 7,000 rupees by the Company, and this continued to be paid to his family after his death in 1808.