The India Office Records (IOR) that are related to the Gulf and the Middle East contain some articles, clippings and extracts from the region’s early press materials.  Here at the BL-Qatar Foundation partnership programme, we created a list of Middle Eastern press materials for copyright purposes.  To put these materials together we needed to trace their history answering the who, when and why.  Even though the extracts available in the IOR come from early 20th century editions, our research established that a number of press materials were in fact 19th century items.  Following on from part I of this blog, this part examines examples of these items.

The press in the first half of the 19th century was a medium that served governments’ interests.  One of the earliest examples available in the IOR is the Ottoman language official gazette Takvım-i Vekayi (Calendar of Affairs, Istanbul, est. 1831).  The paper was initiated by Sultan Mahmud II as part of his reform policy, and was undoubtedly influenced by the Egyptian official gazette al-Waqa’i‘ al-Misriyya (Egyptian Affairs, Cairo, est. 1828) initiated by Muhammad Ali Pasha.  Takvım-i Vekayi became the official medium of publicising new laws and decrees issued by the government.  It also played a crucial role promoting the Ottoman Tanzimat (reforms that were carried out between 1839 and 1876). 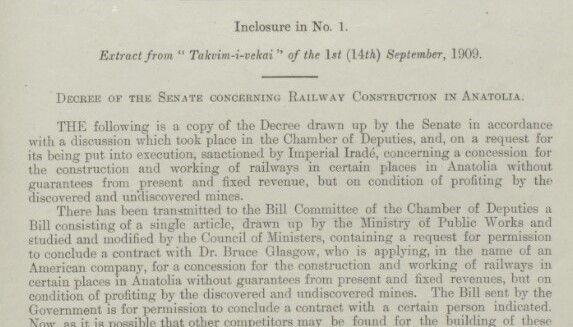 The second half of the century witnessed the publication of many private sector and independent newspapers.   Nationalism, independence and relations with Europe were the most compelling questions of the time.  Some publications adopted a liberal voice against the traditional Ottoman authority, such as the private daily Ottoman language gazette İkdam (Istanbul, est. 1894), founded by Ahmet Cevdet Oran.  Among its lead columnists was Ali Kemal effendi, great grandfather of politician Boris Johnson.  İkdam was known for being critical of the İttihat ve Terakki Cemiyeti (Committee of Union and Progress).

Extract from the Oriental Advertiser about the Damascus-Mecca Railway IOR/L/PS/10/12, f 222r

Another example is the weekly English language Levant Herald (Istanbul, est. 1859).  This was published by British subjects and circulated in the UK and Europe.  Both publications were severely critical of the Ottoman Government, particularly the policies of Sultan Abdul Hamid II. 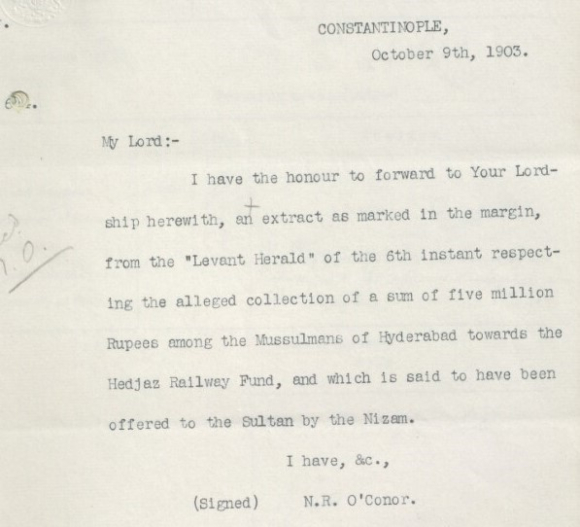 Letter concerning an article in the Levant Herald about the Hedjaz Railway Fund IOR/L/PS/10/12, f 176r

Other materials available in the IOR come from 19th century Egypt.  Among the prominent Arabic language publications is the weekly, later daily, al-Ahram (Alexandria and Cairo, est. 1875), founded by the Lebanese brothers Bshara and Salim Taqla.  Among its early writers were the renowned Muslim scholars Muhammad ‘Abdu and al-Afghani. 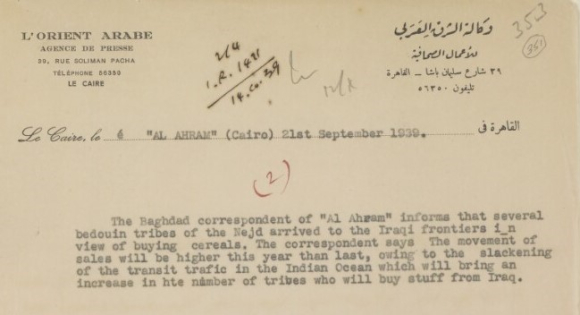 A correction of information published in al-Muqattam relating to an alleged dispute between Saudi Arabia and Kuwait, dated 1937, IOR/R/15/5/121, f 11Ar 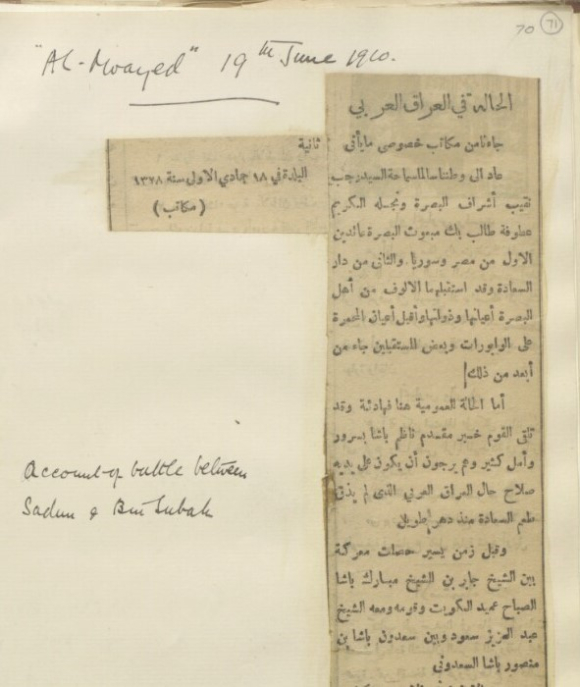 Among the English language press in Egypt was the weekly, later daily, Egyptian Gazette (Alexandria, later Cairo, est. 1880–).  This Gazette was used to spread British propaganda in Egypt.

For extracts of these and other materials, I encourage readers to visit the Qatar Digital Library.  Part III of this blog post will explore the 20th century Middle Eastern press materials found in the IOR.