Continuing our story of Arthur Thomas Williams and the Peace Pledge Union….

The fake telegrams were carefully run off on a duplicator and then planted. 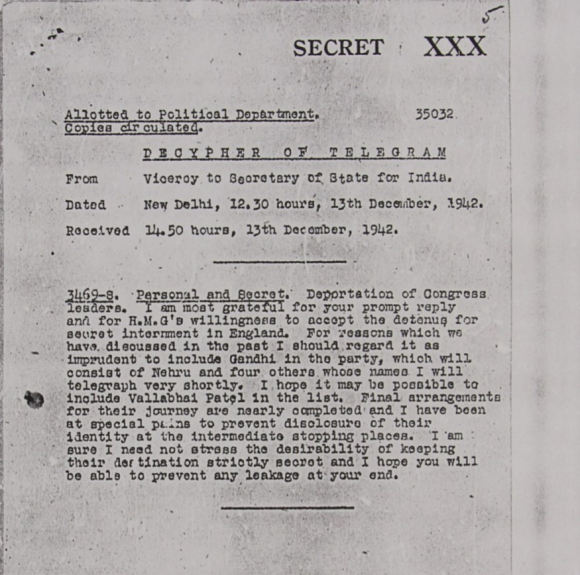 On 18 December 1942 Williams left the India Office carrying an attaché case and made his way to Endsleigh Street.  Before he could reach the PPU offices, he was arrested and taken to New Scotland Yard.

Williams told the police that he was taking home documents to read for his own interest before returning them to the India Office. Fourteen official deciphered telegrams were found in the case; none were the planted ones.

A thorough search was then made of the offices of the PPU.  Stuart Morris made no attempt to obstruct this and it was ‘carried out in the friendliest and politest manner possible’.  Morris said he looked at the documents brought by Williams and then burned them.  Five India Office deciphered telegrams were found in one drawer, and a second batch in a sealed envelope in another drawer including one of the spurious telegrams.  Stuart Morris was then also arrested.

Williams’s statement made on 18 December stated that he had heard someone in Hyde Park talking about India. He thought that the speaker was being unfair to the British government and told him that he saw documents at the India Office showing that the government was interested in Indian reform and independence.  Williams then took documents from the secret waste and delivered them to the PPU about once a week.  Morris returned the telegrams from the previous visit and William put them back in the sack for pulping. However the authorities did not believe that Morris had returned the documents and they judged Williams to be disloyal to the British government and to the India Office in particular.

The next day Williams and Morris were charged at Bow Street with ‘retaining’ and ‘receiving’ under Section 2 of the Official Secrets Acts. They were remanded in custody and taken to Brixton Prison. The proceedings were held in camera and no reference to the case was to be made in newspapers.

However the Daily Worker reported on 21 December that Stuart Morris was being held on unknown charges.  Evening newspapers mentioned the Official Secrets Act.  The Censorship Department moved to stop further press speculation.

Visits to Williams in Brixton Prison from Annie, Rose, his son Sid, his brother and a friend are recorded in the Security Service file with details of their conversations.  Williams was heard to say that his conscience was clear and he had only been guilty of a ‘grave indiscretion’.

The trial was held in camera at the Old Bailey on 19 January 1943.  Williams’s defence said he had been interested in India since serving eight years there with the Army.  He was described as a foolish and simple man, without political motivation. The judge accepted that it was not a case of treachery.

Williams was sentenced to twelve months in prison, Morris to nine.  Further interviews were conducted with both men in Wormwood Scrubs.  A notice about the case was drafted for the press – the India Office insisted that it was not identified as the government department involved. 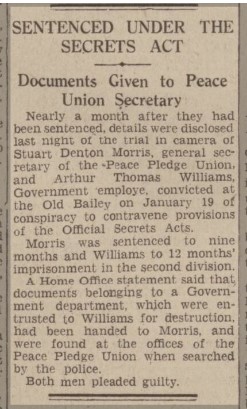