Hostility to the Census of India in 1880

In 1872, the British began the decennial Census of India, as part of the continuing work to survey India and its people. The next census was carried out in 1881, and every ten years after that.  The collecting of data for the census was sometimes looked on with fear and suspicion by local people.  One such instance is described in a report from the Santal Parganas, an area in the Bengal Presidency, where local people objected to the recording of names and the numbering of houses. 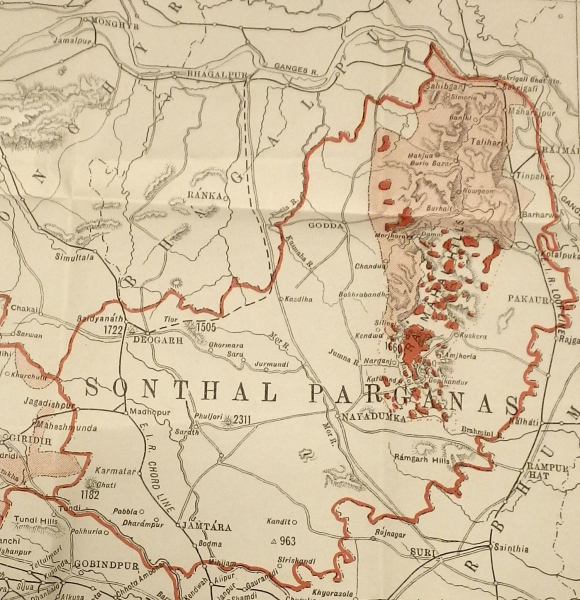 The hostile reaction to the collection of census data was reported on by W B Oldham, Deputy Commissioner of the Santal Parganas, on 14 December 1880.  He described being informed of a meeting held at Narayanpore where anti-British sentiment was strongly expressed.  Oldham immediately set out to find and arrest the ringleaders.  Arriving at Jamtara, he was confronted by a man named Gulia who informed Oldham that he would not permit any names to be taken as part of the census.  Gulia was arrested on the spot, and later that day Oldham tried and sentenced him to six months rigorous imprisonment.

As wild rumours circulated, a panic spread among the non-Santal and British residents who feared escalating violence.  The Deputy Magistrate at Jamtara, W Rattray, was so nervous he sent his wife away by the afternoon train to ensure her safety.  His fears were not without foundation as that evening he awoke to find his bungalow on fire.  The building was quickly consumed by the flames, although Mr Rattray escaped, and the Government records and most of his furniture was saved.  Oldham wrote that there was no possibility of the fire being accidental.

In his account of his escape Rattray wrote: ‘At about 12.30am, I was startled by hearing the crackling of timber.  On awaking, to my utter astonishment, and at the moment in utter bewilderment, I found the north-west corner in flames.  My first thought was that I had been surrounded by the Sonthals, so I wished for my gun, which I kept loaded resting against the wall, some six feet from my bed, but could not reach it as the roof had already fallen in.  I then made a rush for the bath’.  Rattray went on to claim that he believed the Sonthals had made up their mind to kill him, and being unable to get into his bungalow had set it on fire in the hope of burning him. 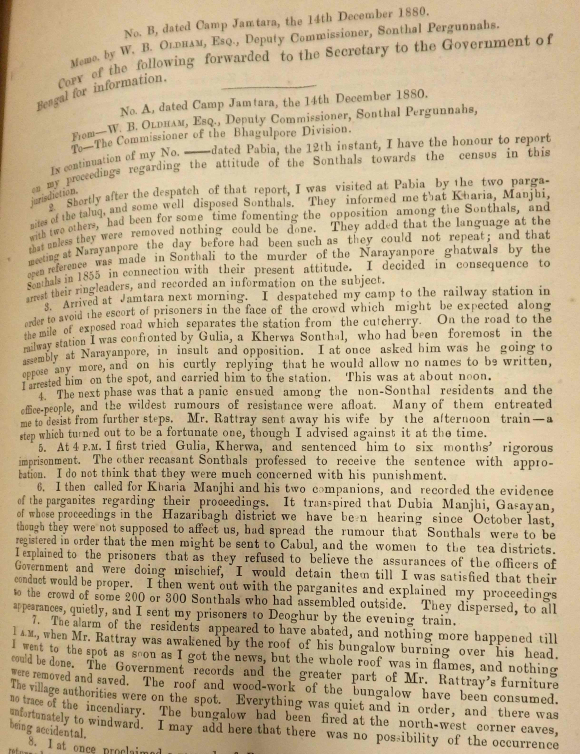 On this point Oldham commented in his report: ‘Mr Rattray was naturally much frightened.  There are no other grounds for this belief.  Mr Rattray is too nervous and fidgety an officer to deal with an occurrence like the present; but will no doubt be able to carry on the census satisfactorily, when he is in a position to deal with opponents to it’.  Oldham was sceptical that the Santals were responsible, but felt that stringent measures against those opposing the law, with a corresponding strengthening of the police would put a stop to any further agitation.  The Government of India ordered that the numbering of houses could be dispensed with, and the registering of males by name relaxed, if it would help allay the apprehensions of the people.

Further reading:
Correspondence regarding the state of public feeling in a part of the Sonthal Pergunnahs [Santal Parganas] in Bengal in respect to the Census, December 1880 to February 1881 [Reference: IOR/L/E/6/54, File 98]