India Office Records sent to the salt mine

In November 1940, a large quantity of original records was sent by the India Office in Whitehall to Meadowbank Salt Mine in Winsford, Cheshire for storage during the war.  Paperkeeper A T Williams went to Winsford to oversee the move.  A decision had to be taken whether to store the volumes at the top or bottom of the mine.  The chief engineer said that ‘there was a slight damp at bottom & a remote or possible chance of flooding apart from which there was a possibility of interference & handling of the volumes by malicious men below who might damage them, unless they were secure, some wire caging round them, or stored…above in a room in racks on the top level of the mine.  Also if by any chance the mine was bombed heavily in, or on the top section they again might not be safe’. 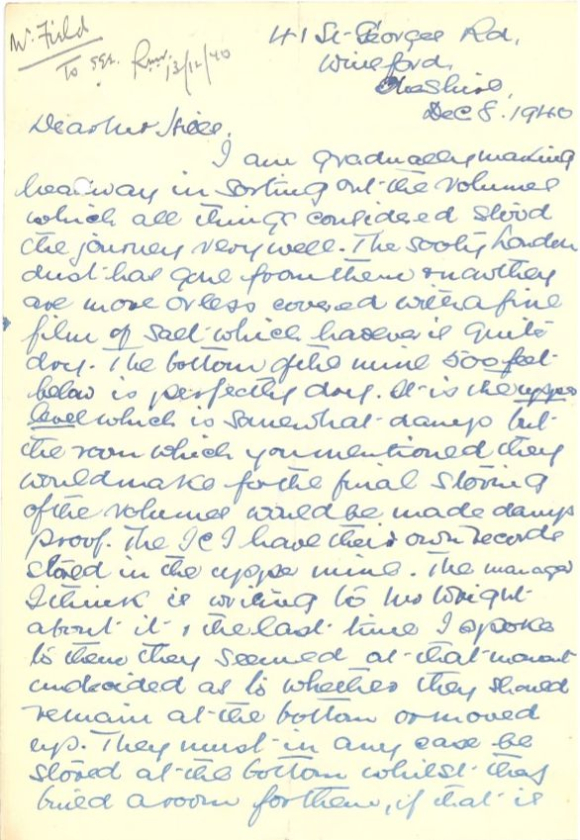 Williams started his task of sorting the records.  He wrote on 8 December: ‘The sooty London dust has gone from them and now they are more or less covered with a fine film of salt which is however quite dry’.  It was a tedious and tiring job, often by candlelight.  He requested overtime pay: ‘The amount of our stuff here has caused some astonishment.  It really is a colossal pile and there are 15 wagons in the siding’.  The salt had rotted his leather shoes, so he bought himself a pair of Wellington boots.

Williams’ update of 23 February 1941 contained further worrying information.  All the volumes were covered with a thin layer of salt, and hundreds were encrusted with small particles up the diameter of a sixpence because they had been unloaded in wet or damp weather and then placed on the floor of the mine.  Some covers were warping.  Williams had worn out his leather gloves and his hands were sore and lacerated.  He had about 20,000 more volumes ‘to wade through’.  By the end of March it had been decided the leave the volumes at the bottom of the mine and joiners were at work fixing strong book racks. 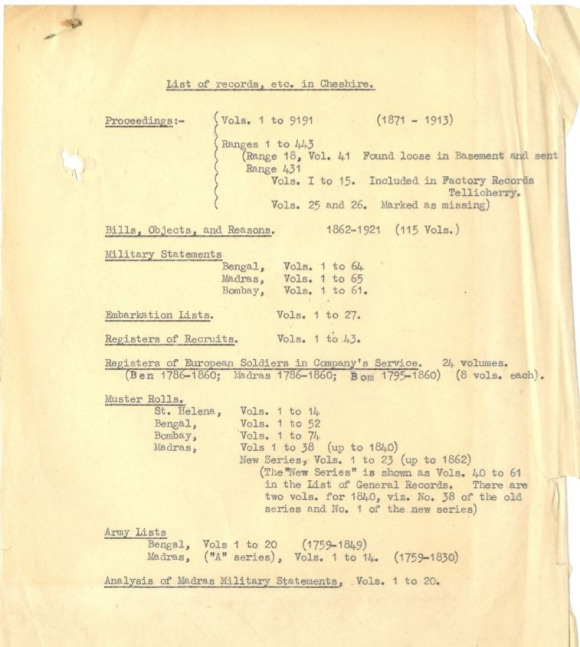 The government’s Paper Shortage Committee became aware of the volumes at Winsford,  some dating from the 18th century. In November 1941 a note was sent to the India Office: ‘The Committee realises of course that this material may be of real historical value but it has thought it worth while to ask for your comments in view of the great demand for safe underground storage, and in view of the urgent need for waste paper salvage’.  The Committee was assured that all the records were either of historical value or of importance to discharging peacetime functions. The 44,000 volumes, weighing 250 tons, comprised copies of Proceedings of governments in India; Public and Judicial records; military recruitment and embarkation lists; Army muster rolls, lists and statements.

After the war the records had to be removed from the mine.  However the basement of the India Office had been altered and there was no room for them.   Arrangements were made in 1947 to take the records to the deep shelter at Stockwell Station in London, but only after the film of salt had been dusted off.