Sending sad news from India in 1858

A letter reporting the death of a friend in India in 1858 was donated earlier this year to India Office Private Papers.  Alfred Eteson of the Bengal Medical Service wrote from Camp Amorka Gorruckpore on 4 April 1858 giving an account of the death of Dundas William Gordon, Bengal Artillery, who was killed at Lucknow on 8 January 1858 during the Indian Uprising. 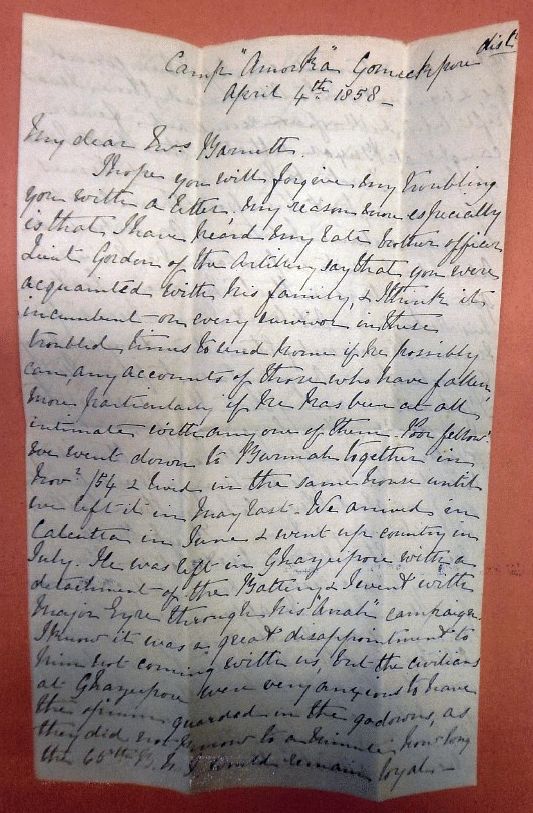 Eteson asked a friend, Mrs Barnett, to pass on the sad news to the Gordon family: ‘I think it is incumbent on every survivor in these troubled times to send home if he possibly can, any account of those who have fallen, more particularly if he has been at all intimate with any one of them’.  From clues in the letter, I have identified the recipient as Eliza Barnett, wife of medical practitioner Henry Barnett, living in Blackheath, Kent.  Her son James was serving as an officer in the Madras Army - Eteson reported that he thought he had caught sight of him in Burma.

Alfred Eteson and Dundas Gordon had lived in the same house in Burma from November 1854 until May 1857.  They then travelled together to Calcutta where they separated in July. Eteson went with Major Vincent Eyre to Arrah whilst Gordon was disappointed to be left in Ghazipur to guard the opium in the warehouses.

The young men were reunited in September 1857 and went on together to Allahabad.  Eteson then stayed behind, ill with fever, and that was the last he saw of his friend.   He wrote to Gordon several times but the letters may never have reached him as the post was so uncertain at that time.  Eteson received no reply.  He only heard of Gordon’s death when he met up with two sergeants of their old battery a few days before he wrote to Mrs Barnett.

Gordon had been in charge of an 8-inch howitzer gun at the Alambagh in Lucknow.  He was leaning over the parapet, looking through his glasses, when a stray round struck the top of his head killing him instantly. Eteson said he felt full of hatred and vengeance at losing an old friend in this way.

Gordon never told Eteson anything about his family and so he did not know their address or even if the parents were alive.  Eteson had found out by accident that Gordon knew his friends the Barnetts.  When talking about batting, Gordon mentioned that he had been a pupil of ’Felix’ at Blackheath – Nicholas, or ‘Felix’, Wanostrocht was a schoolmaster and famous amateur cricketer.  Eteson then asked if he knew the Barnetts of Blackheath.  Gordon said he did and that he had just received a letter saying that his sister had gone to a ball with Miss Barnett.

Eteson wanted to pass on to the Gordons £30 which was his friend’s share of the house in Burma.  He had instructed his agents to keep this money separate from his estate should anything happen to him meanwhile.  He expressed his willingness to do anything necessary in Bengal for the Gordon family.

The letter ends with him sending good wishes to the Barnetts although he added: ‘I can scarcely flatter myself by supposing any of the younger ones remembering me after so long an absence’.