I was browsing the British Library catalogue for appropriate collection items to share on the blog over Christmas.  When I came across a play called The Christmas Ordinary published in 1682, I decided to investigate. 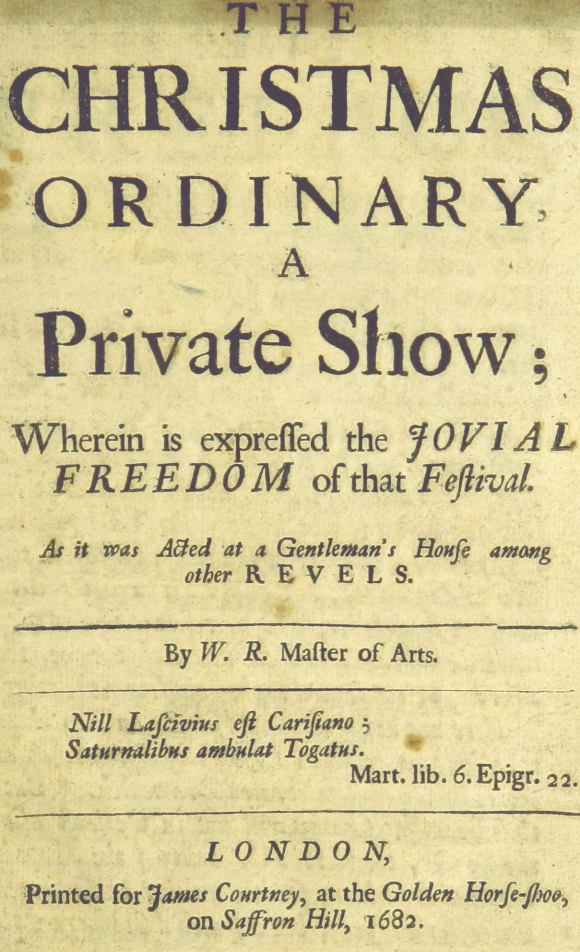 Imagine my delight when I saw that the first character listed was my namesake, a Mr Make-Peace.  And as I have a son named Phil, I was thrilled to discover that Mr Make-Peace has an astronomer son called Astrophil.

Here is the full list of the play’s characters:
‘Dramatis Personae
Mr. Make-Peace, A Countrey-Justice
Astrophil, An Astronomer, his Son
Humphry, The Justice’s Man
Drink-Fight, A Jovial Souldier
Austin, An Hermit
Shab-Quack, A poor Chyrurgeon
Roger, An Apprentice to Shab-Quack
Win-all, An Host of an Ordinary’.

Well, I was hooked!  What sort of story could connect a justice of the peace, an astronomer, a jovial soldier, a hermit, a poor surgeon and the host of an ordinary (an inn).

This is the synopsis of the plot:

‘Roger escaping from his Master Shab-Quack, at Christmas Time, meets with Drink-fight, and joyns with him in a Knot of Merriment.  They also inveigle the Hermit and Astrophil.  Mr. Make-peace being pensive at his Son’s Departure, sends Humphry to enquire him out, who, in the Disguise of a Traveller, finds them frolicking at an Ordinary; who insinuates himself into their Mirth.  Afterwards, with false Dice, cheats them, and escapes.  They afterwards, wrangling about the Reckoning, beat their Host, who summons them all before the Justice, and runs to Shab-Quack for Cure.  Mr. Make-peace, perceiving his Son Astrophil amongst them, joyfully entertains him and the rest. Shab-Quack pardons his Servant’s Christmas Merriment, and the Hermit, in a jolly Humor, is bound Apprentice to the Host’. 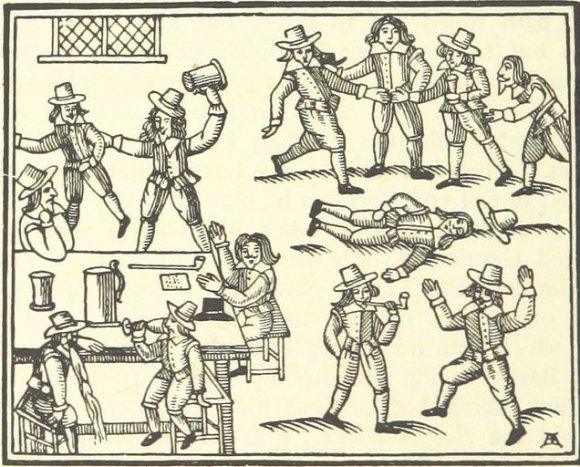 I instinctively focused upon Mr Make-Peace’s devotion to his son.

‘O this Astrophil doth so Banquet me with joy, that I am almost cloy’d with my Felicity, and I grow hoarse in Gratulatory Praises.’

‘Not yet return’d my Son? Then let me weep my Body dry to Dust, and make this Chair my Coffin.’

And when Astrophil returns home safely –
‘Methinks there is a young Spring in all my Limbs, my Blood trips Coranto’s in my capering Veins… Come, follow me all, and I will satisfie you with a pleurisy of Delights’.

And so I wish you all a Happy Christmas, cloyed with felicity and a pleurisy of delights.