Christmas appeal from the Shaftesbury Society and Ragged School Union

In 1925 the Shaftesbury Society and Ragged School Union published a touching booklet entitled A Christmas Recipe.  It was an appeal for funds to support their work with needy London children. 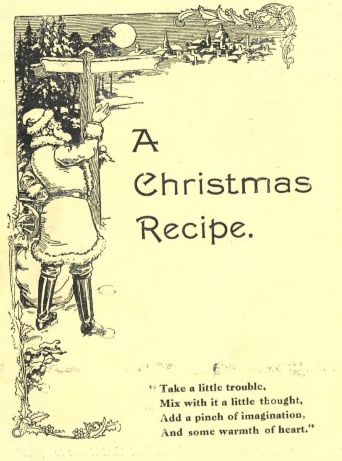 Front cover of A Christmas Recipe

The Christmas recipe was this:
‘Take a little trouble.  Mix with it a little thought.  Add a pinch of imagination, and some warmth of heart.  Stir yourself up to the point of action.  Pour in as much as you can spare from your pocket.  Take a pen and ink, and an envelope, and a three-halfpenny stamp. Take the result to the post.  And there you are – a bit of happiness worth anybody’s while’. 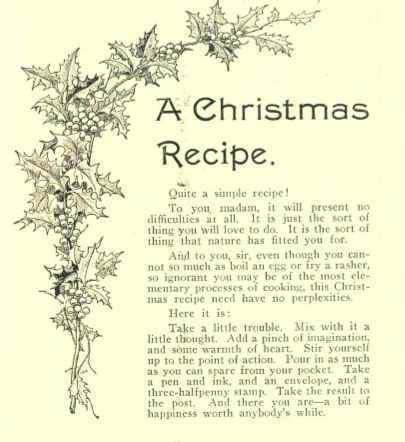 The old saying of ‘too many cooks’ did not apply to this recipe – the more cooks the better.  The leaflet then went on to urge the reader to open their eyes to children who were poor, lonely, ailing, hungry, and badly clad.  Then to imagine that they were their own children and that they were powerless to help them.

As for the amount of the donation: ‘Trouble and thought and imagination and warmth of heart together will tell you more clearly than anything else just how much of this ingredient you should use… you should not stint it.  If you can spare half a crown, a florin piece will be just too little to bring the best result of happiness.  If you can spare fifty guineas, fifty pounds will be just too little for a really perfect dish of happiness’.  The very act of donating would bring cheer: ‘You will smile to yourself rather happily as you drop the letter into the box.  You will have a light heart for the rest of the day, and for some days to come’.

The booklet then goes on to set out why money was urgently needed.  Despite increases to wages and the help given through schools and other agencies, many poor children in London lacked warm clothing, nourishing food, and fresh air.  Many were ill or disabled.  In large families the dole given to unemployed men seldom met all necessary expenses after the rent was paid.

As well as gifts of money the Shaftesbury Society asked for clothing, boots, nourishing food, toys, and picture books.   The Society also appealed for donations of time: ‘It just means coming to one of our Missions for an hour or two a week, and being friends with the children’.  The Society’s volunteers were very diverse: ‘the unlettered, the rough toiler, the man and woman who were themselves such children as these,…the scholar, the University graduate, the artist, all eager to help’. 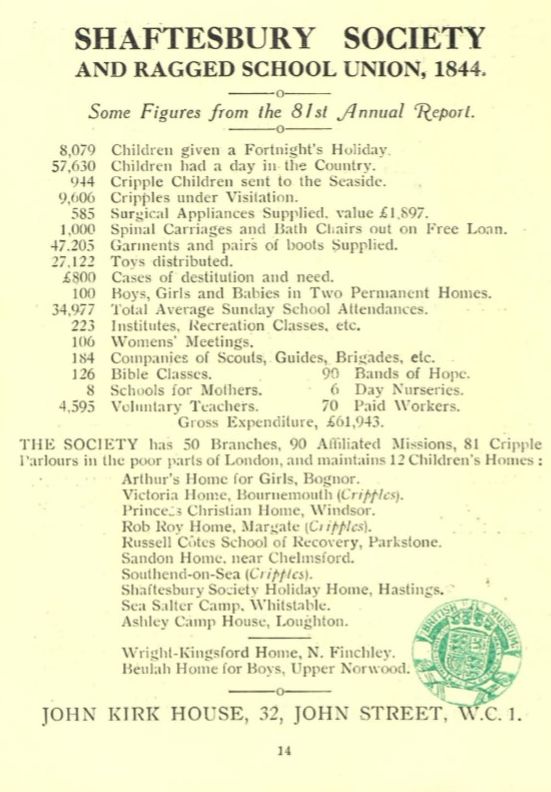 Figures from the 81st Annual Report of the Shaftesbury Society and Ragged School Union demonstrated the breadth of work.  Children were given trips to the seaside and country.  Medical treatment, equipment and ‘industrial training’ was provided for disabled children.  Clothing and boots were supplied.  The Society maintained holiday homes and homes for destitute children, as well as organising day nurseries, infant welfare centres, Sunday Schools, Bible classes, schools and meetings for mothers, companies of Scouts and Guides, and Bands of Hope promoting temperance. Seasonal greetings from A Christmas Recipe

The Society summed up its aims as to love and to serve.  The booklet includes a quote from the 1924 Declaration on the Rights of the Child: ‘Mankind owes to the Child the best that it has to give’.