We left George Byworth in Tasmania working as a merchant officer on sealing voyages.

Back in London, his father Thomas died in 1837.  His will left everything to George’s mother Mary.  She carried on with the watch-making business in Lambeth with her son Thomas.

We know that George returned to England at some point, because on 24 October 1844 he married Amelia Webb in Camberwell.  He described himself as a master mariner of Old Kent Road.  Nineteen-year-old Amelia came from Binfield in Berkshire. 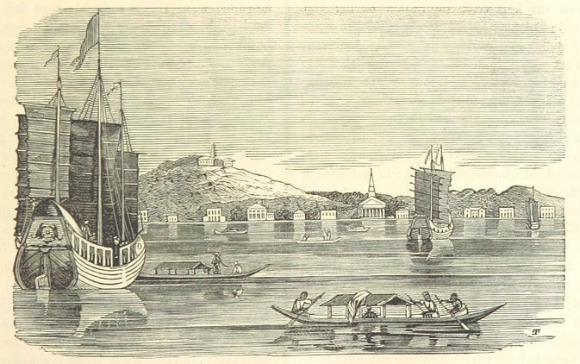 The couple were soon travelling.  Their son George Alfred was born in October 1845 and baptised in March 1847 in Singapore.  In June 1847 George was the master of the Antaris sailing from Singapore to Port Jackson with a general cargo.  His wife and son were passengers on the ship.  Sons Donald Campbell and William Wordsworth Russell, were born in Sydney in July 1847 and April 1849.  Four more children were born in Tasmania between 1851 and 1858: Mary Ann Louisa, Amelia Frances, Edith Constance Burnell, and Loughlin Alan.

George’s mother Mary died in 1853.  She left the business premises and equipment to her son Thomas.  Household goods and other personal effects were shared equally between her sons George, John and Thomas.  She named her friend Henry Vandyke of the Marine Society as her executor but he renounced probate in favour of Thomas. An intriguing link to the Marine Society!

In 1854 George changed careers and became licensee of the British Hotel in George Town, Tasmania.   He advertised in his local paper, the Cornwall Chronicle:
‘GEORGE BYWORTH (late Master Mariner) has great pleasure in making known to the public at large, and particularly to families who visit George Town for health and recreation, that he has obtained a license for the BRITISH FAMILY HOTEL, where will be found accommodation for families and parties, of the most agreeable nature, and at moderate remunerative charges. G. B. will devote himself to ensure the comfort of all persons who favour him with their patronage’. 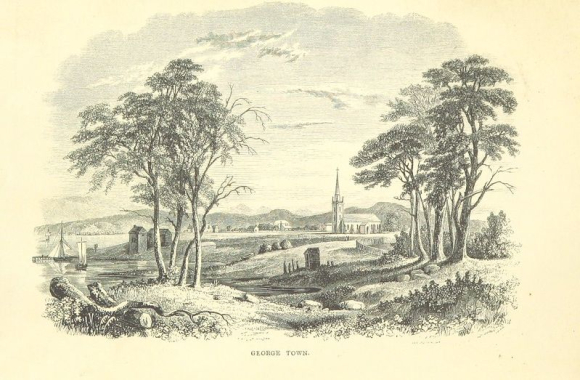 George Town, Tasmania from Francis Russell Nixon, The Cruise of the Beacon: a narrative of a visit to the Islands in Bass's Straits (London, 1857) Shelfmark 10498.aa.7. BL flickr

However in September 1857 George Byworth, licensed victualler, was declared insolvent.  By July 1859 the Cornwall Chronicle was reporting the destitute state of the family.  George was desperate to find work and, even though he had ‘seen better days’, he was very willing to accept ‘humble employment’.  Local people raised money for the Byworths and donated clothing, flour, tea, sugar, wood and coal.  Amelia was given help to open a milliner’s shop. 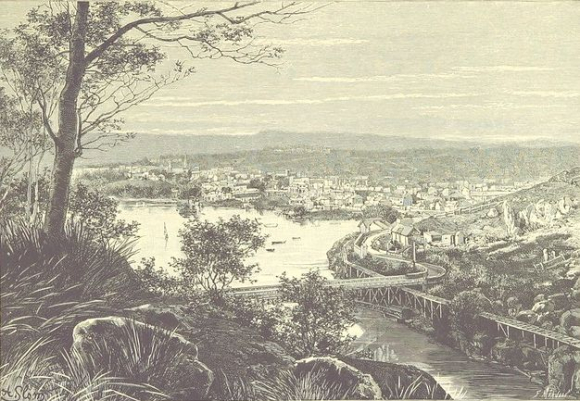 The next blow was Amelia’s death from dropsy in October 1862.  George tried to earn a living by running evening classes in navigation, and then expanded this into a commercial and nautical school offering ‘an English education’.  But in 1869 the seven-roomed cottage in Launceston he had occupied was advertised for letting, and his household goods were put up for auction – ‘Piano, table, chairs, bedstead, cooking utensils, and quantity of sundries’.

Things weren’t going well for the Byworth family in London either.  In 1869 George’s brother Thomas was sentenced to eighteen months’ hard labour for receiving stolen goods.

In September 1870 George Byworth entered the Launceston Invalid Depôt, a government-run institution for the sick and poor.  He was unable to work but left in March 1872 at his own request.  George died in Launceston on 20 October 1876 at the age of 69 after a life full of incident.