In 1945 George Orwell signed up as a sponsor of the Freedom Defence Committee in defence of three anarchists who had been jailed at the Old Bailey.

List of members of Freedom Defence Committee from pamphlet 1899.ss.4.(29.)

It was just before the end of the Second World War, and a small group of anarchists in Britain had been publishing anti-war articles in a publication called War Commentary since 1939. The anarchists believed that governments with a strict top-to-bottom hierarchy were to blame for war and that Britain’s mistreatment of colonies in the empire was unjust. They didn’t approve of borders, and thought that private property caused conflict.

The intelligence service MI5 had been aware of the anarchists’ subversive publications for many years, but it wasn’t until the end of the war neared in 1944 that MI5 began to be concerned.  They feared that returning soldiers might try to overthrow the British government, and that the anarchists were telling servicemen to hold on to their guns for the revolution! 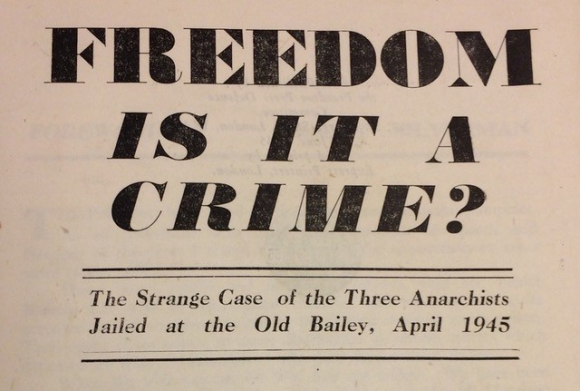 Eventually, four anarchists—Marie Louise Berneri, Vernon Richards, John Hewetson, and Philip Sansom—were charged on 22 February 1945 with dissemination of seditious materials.  Only three anarchists were prosecuted, however, as Marie Louise Berneri was married to Vernon Richards and technically could not conspire with her husband.  Outside their trial, art historian Herbert Read gave speeches in support of their cause: ‘I speak to you as an Englishman, as one proud to follow in the tradition of Milton and Shelley –the tradition of all those poets and philosophers who have given us the proud right to claim freedom of speech and the liberty of unlicensed printing’.

In addition to Herbert Read’s speeches, the Freedom Press Defence Committee was set up to help raise funds for legal fees.  George Orwell was a part of this committee which stated its aims as existing as a ‘vigilance’ against cases ‘concerning the infringement of civil liberties’.  While MI5 were worried about revolutions, many well-known writers and politicians were worried about the British government keeping military law after the war was over.  Famous sponsors of the committee included Aneurin Bevan (who would go on to establish the NHS) and Alex Comfort (who would go on to write The Joy of Sex).

A copy of the speeches was kept by Orwell in his collection of political pamphlets which is now held at the British Library.  He himself would go on to write Nineteen Eighty-Four, a novel about a government suppressing the free speech of citizens in England.