Imagine you’d left your home in London to establish a new life on the island of St Helena.  You begin a trading partnership with your fiancée’s uncle, and the Governor writes to the East India Company’s Directors singing your praises.   As a result, you become the island’s schoolmaster, and later the Company’s naturalist. You send out to England for your fiancée to join you and eagerly await her arrival…. only to find that she has transferred her affections to the ship's Captain and no longer intends to marry you.

This unfortunate turn of events happened to the naturalist and explorer William John Burchell (1781-1863).  During his time on St Helena (1805-10), his travels across South Africa (1810-15), and his expedition to Brazil via Portugal, Madeira and Tenerife (1825-30), he collected tens of thousands of animal, plant, and insect specimens and a variety of ethnographic material.  A talented artist, he made many drawings and paintings, including landscapes, specimens, and the people he encountered.  Burchell has a zebra, several birds, a lizard, fish, butterflies, a plant genus, and even the army ant Eciton burchellii named after him, yet he is not generally well known. William was born in Fulham in 1781 to the nurseryman Matthew Burchell and his wife Jane.  His early life was surrounded by plants from all over the world, and he came into contact with many of the day's leading botanists.  He worked for a while at the Royal Botanic Gardens, Kew, and by 1803 had been elected a fellow of the Linnean Society.  However in August 1805 we find Burchell signed up as 4th mate on the East India Company ship Northumberland.  What made Burchell leave his blossoming botanical career in London?  The answer seems to be a young woman named Lucia Green.  Burchell’s family objected to the match, presumably making him determined to succeed on his own terms.  He arranged a trading partnership with Lucia’s uncle William Balcombe, who had permission ‘to proceed to St Helena for the purpose of exercising the business of an Auctioneer and Appraiser, to the said Island’. 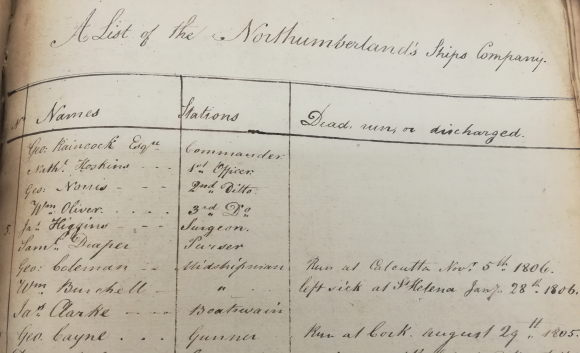 How Burchell was able to join the Northumberland is not clear.  He did not have the required maritime experience, so perhaps there was a friendship with Captain George Raincock, or a connection with one of the ship’s principal managing owners, Henry Hounsom, William Masson or William Sims.  The ship arrived at St Helena on 13 December 1805.  The ship’s journal notes that Burchell “Left sick at St Helena 28 Jan 1806”, but the presumption is that he never intended to travel further. 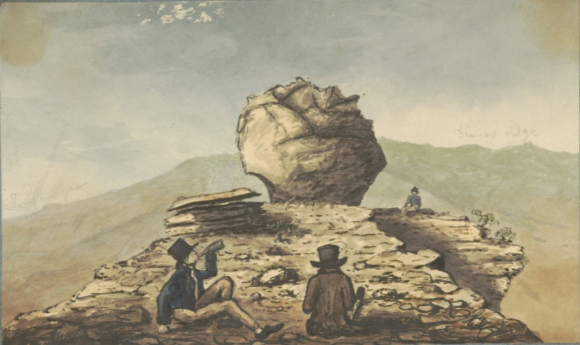 Burchell was appointed schoolmaster in June 1806 and asked to focus on educating the young men of the island in the light of Company regulations for cadets.  In November 1806 it was proposed that Burchell develop and look after a botanic garden in James’s Valley.  In 1808 Burchell was appointed as the Company’s naturalist, to “ascertain and investigate the natural productions of the Island… in the hope that something valuable for the purposes of commerce or manufacture might be brought to light”.  He was asked to send back samples of “coloured earths” and “sea fowl guano”, to look after plants destined for England, and investigate the cultivation of cotton. 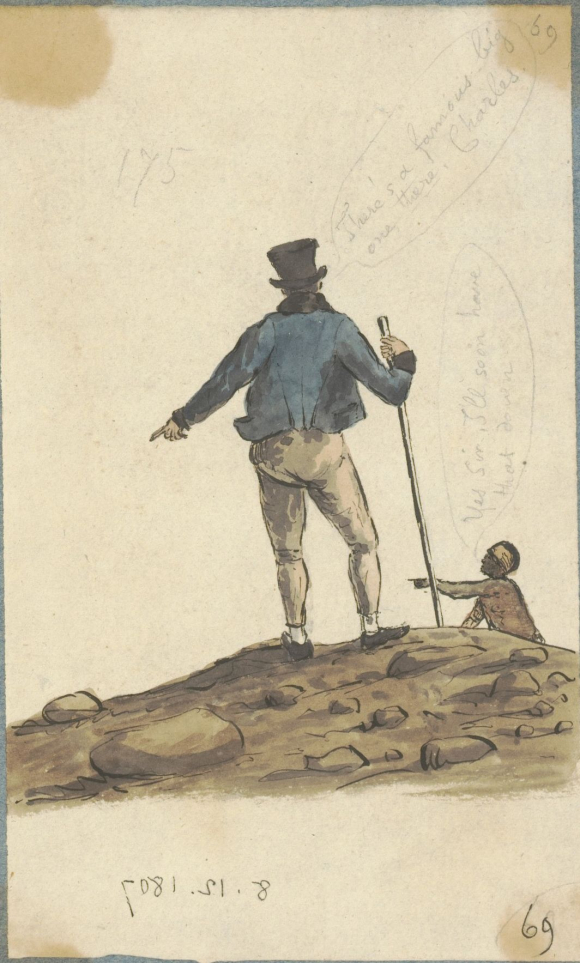 And all the while, he awaited the arrival of his fiancée Lucia Green.

Further reading:
IOR/L/MAR/B/141 O: Journal of the Northumberland
IOR/L/MAR/B/181 F: Journal of the Walmer Castle
IOR/G/32/70-75: St Helena Consultations
IOR/G/32/136-138: St Helena: Original Letters &c from St Helena to the Court
IOR/B/141, 146 Minutes of the East India Company Court of Directors
Susan Buchanan, Burchell’s Travels. The Life, Art and Journeys of William John Burchell, 1781-1863 (Cape Town, 2015)
William J. Burchell, Travels in the Interior of southern Africa  (London, 1822-1824)
Buchell’s St Helena drawings, and his manuscript notes on the flora and fauna of St Helena (together with other archival material) are held by the Library, Art & Archives, Royal Botanic Gardens, Kew.
Burchell’s original St Helena diary, together with other papers and correspondence, is held at the Oxford University Museum of Natural History.  It has been published by Robin Castell in William John Burchell (1781-1863) [on] St. Helena (1805-1810) (St Helena: Castell Collection, 2011). The diary is quoted in Buchanan, op. cit.
Other Burchell papers, and papers relating to Burchell can be found at the Linnean Society (Correspondence with William Swainston), and the William Cullen Library, University of Witwatersrand (including copies of material at Oxford University Museum of Natural History, and the papers of Helen Millar McKay in connection with her research on Burchell). Further drawings and paintings by Burchell can be found in the collections of Museum Africa in Johannesburg.