Painting a Thousand Words: Timur and His Mughal Descendants

The Mughal Empire in India was founded in 1526 by Zahir al-Din Muhammad Babur.  Babur was a Central Asian prince who boasted an impressive lineage.  On his mother’s side he was descended from the great Genghis Khan, founder of the Mongol Empire, while on his father’s he was descended from none other than the conqueror Amir Timur.

Unsurprisingly, the Mughals were proud of their heritage and sought to clearly weave it into their imperial narrative.  An example of this is seen in a stunning Mughal miniature - 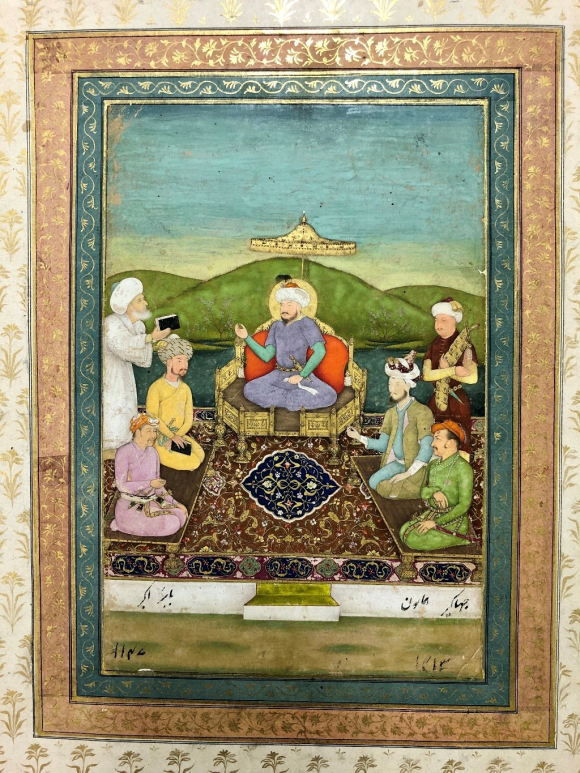 The painting depicts Timur, seated on a central raised couch, surrounded by his seated Mughal heirs: the first four emperors of the Mughal Empire.  To his right sits Babur, holding a book, and Akbar, while to his left sits Humayun, with his arm outstretched, and Jahangir.  Standing to Timur’s right is the poet Sa’di in white, while an attendant holding a state sword stands to his left.

It is notable that every imperial figure in the image bears a striking jeweled dagger on a golden belt, apart from Humayun.  This may be attributed to the fact that Humayun experienced the misfortune of losing his father’s empire and being forced into exile for a period of 15 years, before successfully reclaiming the empire with the support of Safavid Persia.

Humayun’s relative failure as an emperor therefore perhaps translates into not only his lack of dagger but the simplicity of his attire.  It would appear that in this miniature the strengthening of the empire corresponds with the richness of imperial attire.  We therefore see Babur with a jeweled dagger, Humayun plain, Akbar with a dagger and some jewelled ornaments and finally Jahangir, richly adorned with multiple jewels and pearls across his person.

This painting was created c.1650 during the reign of Shah Jahan, when such group portraits of Mughal ancestors were popular.  It forms part of the rich treasures of the British Library that can be viewed by appointment in the Asia and Africa Studies Print Room.  A well-worth trip to see some beautifully ornate illustrations of history!