17th Century Recipes for Those Feeling Under the Weather

It is that time of year again when almost everyone is getting ill.  Luckily, the British Library manuscript collections are full of historic and innovative gastronomic concoctions to help alleviate your various ailments.

A fine place to start is with the Sloane manuscripts, which contain a formidable number of medical recipes, or receipts, as they were known before the 1700s.  On his death, collector and physician Sir Hans Sloane bequeathed his vast collections to the nation.  Chief among Sloane’s academic interests was medicine and he collected many manuscripts that illuminated approaches to medicine through the ages.  These manuscripts date back as early as the 10th century.  They form a fascinating record of the varying treatments used for illnesses over time, as well as highlighting the persistent impulse to treat ailments with food.

From the 1600’s onwards, we can read some of these recipes in modern English and see just what sort of potions we may have had to drink for an illness had we lived during the 17th century.  Here are a few informative examples: 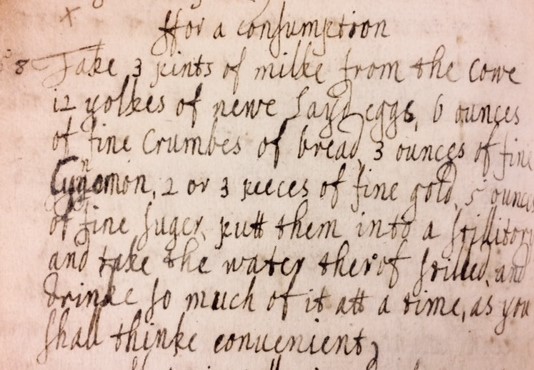 Recipe for the treatment of consumption, Sloane MS 3949

For the treatment of consumption, it was recommended to take 3 pints of cow milk, 12 yolks of fresh eggs, 6 ounces of fine breadcrumbs, 3 ounces of fine cinnamon, 2 or 3 pieces of fine gold (surely a staple of every good chef’s kitchen cupboard), 5 ounces of fine sugar, mix together and bring to the boil.  Then one would drink as much of it at a time as possible, or as the recipe states, as much ‘as you shall think convenient’. 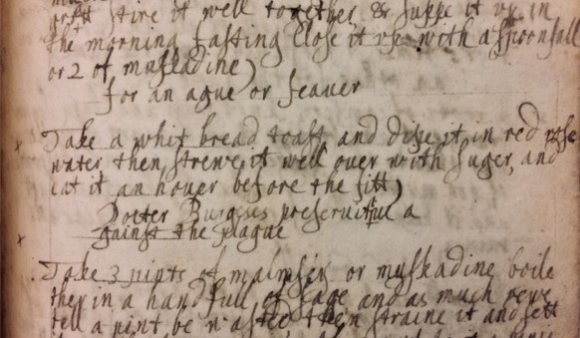 This was a nice simple recipe to ward off fever:  Take a piece of white bread and dip it in red rose water, then strew it with sugar and eat it an hour before the fit (obviously it helped to know when you were due to be ill for this one). 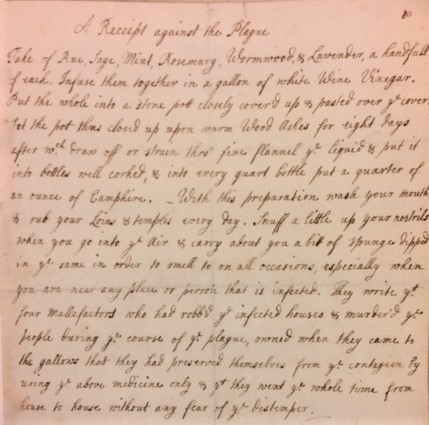 Recipe against the plague, Add MS 4376

If you were feeling particularly unwell, had buboes in your armpits and a progressively aggressive fever that hinted at your impending doom, then you more than likely had the plague.  In this case, you would have needed to consult the following advice by order of the Corporation of London.  It involves taking rue, sage, mint, rosemary, wormwood and lavender and infusing them together in a gallon of white wine vinegar (so far, so very Waitrose), cooking them in a pot for eight days, draining the liquid and then applying this to the body every day.  You would also have to pour a bit of the mixture onto a sponge to smell when you happened to pass by a particularly plague-ridden avenue.  This receipt even includes its own product review.  It states that criminals would put some of the recipe on their bodies before robbing the houses of those deceased from plague, and that despite them entering these sites of contagion, they had remained healthy.

Although very different from a modern cough medicine, one can recognise in these recipes a few familiar tendencies, such as: equating infused herbs with health; using warm dairy products to comfort; and the use of sugar to make the mixtures more palatable.