In December 1807, Miss Lucia Green boarded the East India Company ship Walmer Castle, bound for St Helena and a new life with her fiancé, the naturalist William John Burchell.  By the time the ship arrived in April 1808, Lucia had decided to break off her engagement.  And the reason for her change of heart?  During the voyage on the cramped East Indiaman, Lucia had fallen in love with the ship's Captain, Luke Dodds.  Burchell was devastated and never married. But what happened to Lucia and her Captain? 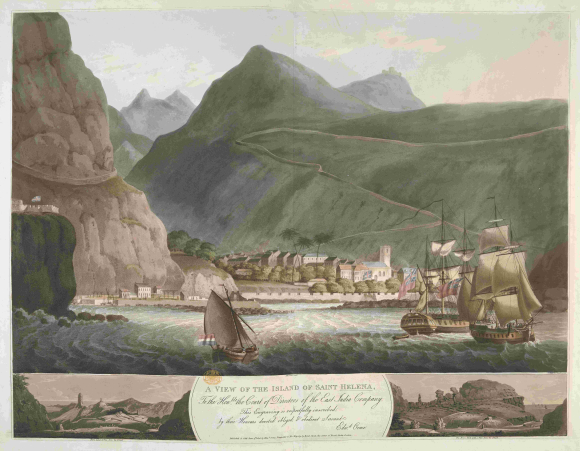 According to the journal of the Walmer Castle, Lucia disembarked at the Cape of Good Hope in June 1808.  In July 1809, she boarded the Warley at the Cape, and reached St Helena in August.  Captain Luke also returned to St Helena that summer, which must have been distressing for William Burchell.  The Walmer Castle arrived back in England in September 1809.  It must have still been love for the reunited Lucia and Luke, because they married in Lingfield, Surrey on 29 May 1810. Luke Dodds was 20 years older than Lucia when they met.  He was born in Heworth, near Newcastle in 1768.  He went to sea aged 11 or 12, working the Northumberland coast as a seaman before finding work on the EIC ship Sulivan in 1785.  He worked variously as quartermaster, gunner’s mate, and boatswain on EIC ships on the China run, interspersed with voyages to the West Indies, becoming 1st mate on the Walmer Castle in 1798.  By 1805 he was Captain, and was to stay with the Walmer Castle on its runs to China via India until 1813.  It was a rapid rise, and Dodds would have made a comfortable amount of money on the way during his East India Company voyages. 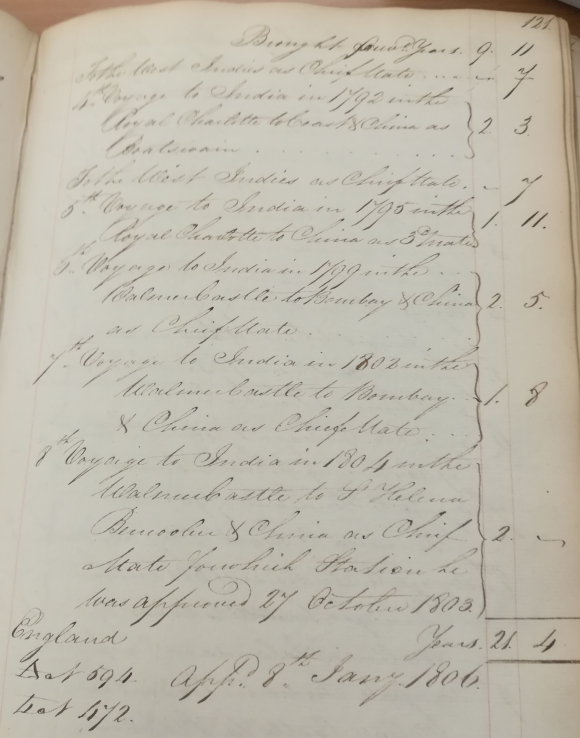 IOR/L/MAR/C/659 Description of commanders and mates examined by the Committee of Shipping. Entry for Luke Dodds, pp.120-121.

The Dodds had two children - Henry Luke, born 5 February 1811, in Woodford, Essex, and Lucia, baptised Hastings, Sussex, 5 July 1815.  By the 1841 census Luke and Lucia were living comfortably in Hythe, Hampshire.  A magistrate, an 'Esquire' and a man of independent means, Luke Dodds died on 28 February 1849, aged 80.  He lived to see his daughter Lucia marry Graham Eden William Hamond on 7 December 1843.  She married well, Hamond being the son of Admiral Sir Graham Eden Hammond.  Unfortunately, the marriage was short-lived as tragedy struck when Hamond died at Woolwich on 23 January 1847 while in command of the steam-sloop Medea.  They had a daughter, Elizabeth Anne, and a son Graham Eden, an officer in the 7th Hussars, who died in 1872.  Elizabeth Ann married the Reverend John Henry Good, vicar of Hythe, in 1879.  Their son Cecil Henry Brent Good was born in April 1880.  In 1948, his daughter (and novelist) Cecily Good, great grand-daughter of Luke and Lucia, married Sir Basil Gould, becoming Lady Gould in the process.

Luke and Lucia's son Henry Luke Dodds never married.  He was educated at Christ Church, Oxford, and gained an MA from Cambridge in 1843.  He was vicar of Great Glen (or Glenn), Leicestershire from 1855 until his death in May 1886.  By the 1871 census his mother Lucia was living with him in the vicarage.  She died there on 6 November 1878 age 90 and was buried in the graveyard of St Cuthbert's Church.  Her headstone records her date of birth as 7 July 1788, meaning she was just 19 when she met Captain Dodds on that fateful journey to St Helena.  Lucia's headstone reads 'Dearly Beloved and Longed For' and the burial register is annotated (presumably by Henry Dodds) 'eheu! desideratissima' (Alas! Most longed for).  William Burchell may well have agreed.