'Cleverness is not required in an indexer; brilliancy is dangerous.  The desirable quality is clearness.'

So begins The Technique of Indexing (1904), a manual by a pioneer in the field of indexing, Mary Petherbridge.  A graduate in natural sciences from Cambridge University, Mary set up The Secretarial Bureau in London in 1895.  The Bureau offered a range of services; enterprisingly, it also gave training in secretarial and indexing work.  For women, this was an opportunity to learn skills that could help them to earn an independent living.

Mary’s timing was fortunate.  The great department of state, the India Office, held many volumes of historical documents that were effectively unusable because they had no indexes.  Of particular concern were 488 volumes of East India Company letters to India, covering the Company’s history from 1753 to 1858.  In 1901 the Superintendent of Records, Arthur Wollaston, decided that male clerks could not be spared for indexing work.  Women from the Bureau were commissioned instead.

Although freelance, Mary quickly established a firm relationship with the India Office.  She set up an office in the Record Department, at one point even bringing in her own furniture.  There her small staff, usually between four and eight women, indexed the correspondence, Royal Commission reports, and other records.  Mary also acted as the Department’s Dutch and Portuguese translator.  Her business flourished, as her office stationery shows: 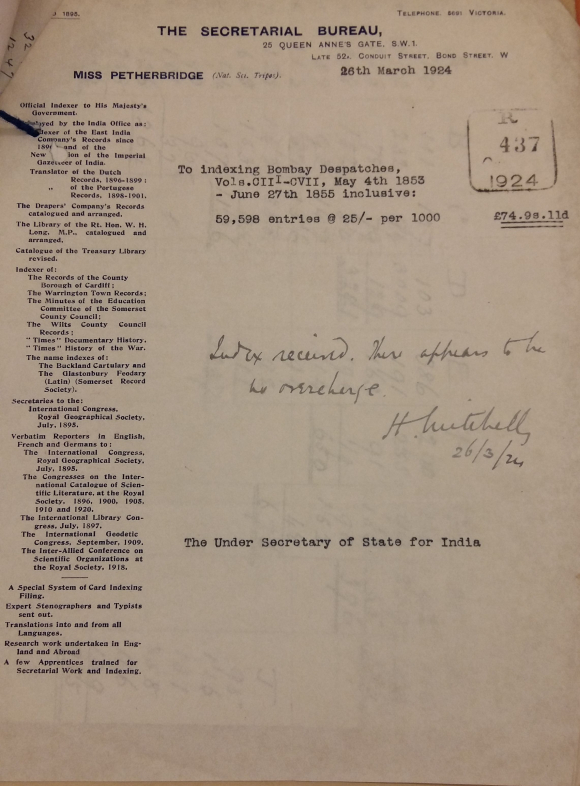 For the Bureau, the India Office commission was clearly prestigious.  Examples from the East India Company’s records featured in The Technique of Indexing: 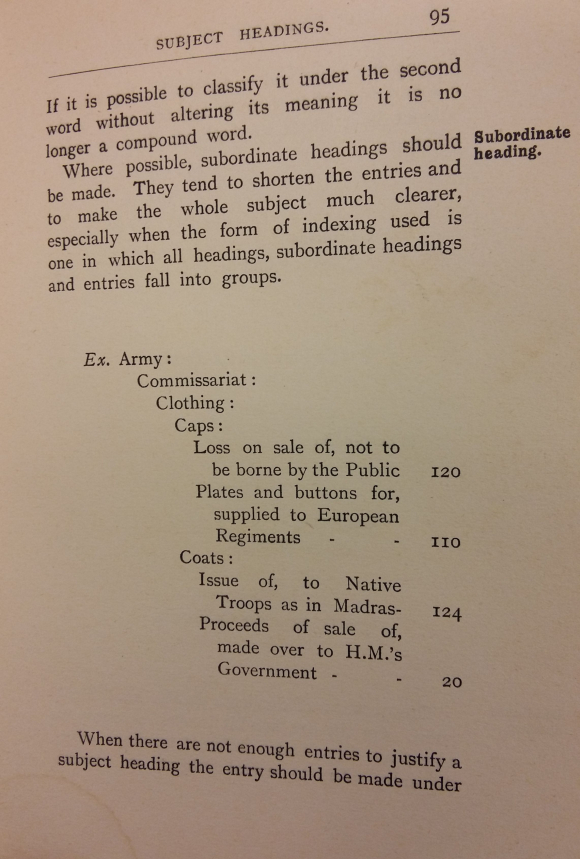 Page from The Technique of Indexing

Mary selected her best pupils to be trained on the India Office premises.  One of these was Theodora Bosanquet, who later was to become well known as the secretary to Henry James.  Years afterwards, Theodora recalled being hard at work in the office when she heard The Ambassadors being read aloud to a fellow pupil – a dictation exercise.  James had approached the Bureau to find a secretary; Theodora volunteered for the role.  The scene that she evokes is an appealing one: James’s words echoing in the offices upstairs, while the business of government carried on in the formal rooms below.

The indexing of the India correspondence was finally completed in 1929.  Mary and her staff had created a remarkable 430,000 index entries, filling 72 volumes.  Not long afterwards, Mary closed down the Bureau.  She herself continued to work as Official Indexer to Government until her death in 1940.

These index entries make up almost a third of the entries in the Records catalogue today.  Mary’s contribution is recorded only in the invoices that she submitted (at a rate of 2s 6d per 100 entries by 1929).  But no one did more to open up the East India Company’s later archives than she.  Generations of researchers have reason to be grateful!