Before the encrypted digital communication of our day, diplomatic correspondence involved using trusted couriers, and sometimes ciphers of the kind that featured in an earlier Untold Lives blogpost.  Lord Granville (1773–1846), whose family papers have recently been acquired by the British Library, would have been no stranger to such methods, as a diplomat who served in both St Petersburg and Paris.

Secrecy was vital for Granville’s long correspondence with his lover Lady Harriet Bessborough (1761-1821) too.  When their affair was at its height, they wrote daily.  Both then, and later when arranging care and education of their illegitimate children, discretion was of the utmost importance.  Only a few of their closest friends were privy to the true nature of their relationship.  Gossip and innuendo could not be entirely suppressed, but the real danger was of incontrovertible evidence – like letters - falling into the wrong hands.  This could have led to loss of reputation, position, and even children for Lady Bessborough.

So all the more surprising is the openness of their correspondence, particularly the letters of Lady Bessborough.  Though plagued with fear of discovery and ruin, she must have been confident that these communications were reasonably secure.

The letters and notes were delivered direct or via intermediaries, by messenger or post.  While Granville was away in Russia, they went by diplomatic courier – a particularly secure channel of communication.  Those letters were numbered like diplomatic despatches, often written over several days, in contrast with the hurried scrawl typical of communications between them in England.  Nevertheless, Lady Bessborough was concerned for their safety and confidentiality, and had to be reassured by their friend George Canning that all would be well. 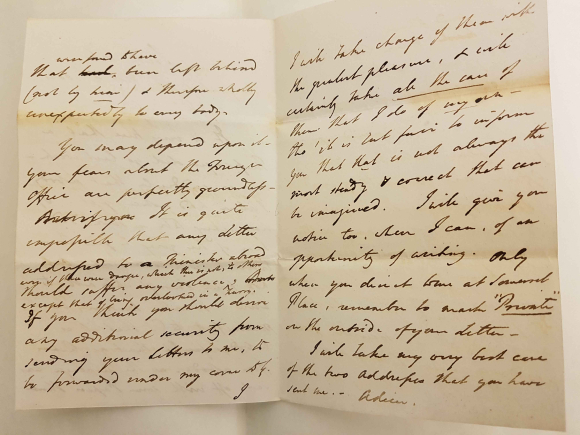 'You may depend upon it – your fears about the Foreign Office are perfectly groundless … if you think you should derive any additional security from sending your letters to me, to be forwarded under my cover to G, I will take change of them with the greatest pleasure & will certainly take all the care of them that I do of my own…'  Letter from George Canning to Lady Bessborough, 2 November 1804 (Add MS 89382/3/2 ff. 7-8).

They used code names for mutual friends and public figures.  Granville himself was nicknamed 'Mr Arundel' and Lady Bessborough signed her letters to Russia 'Ann Newton'. 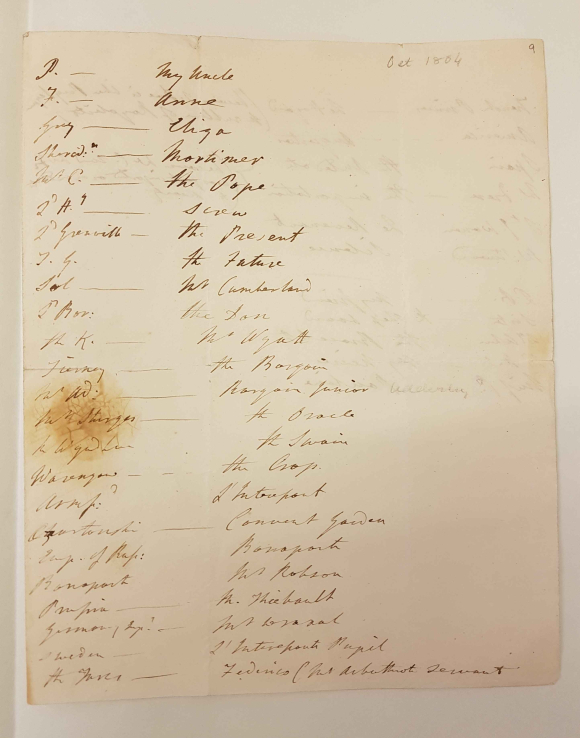 Back in England, they had used various subterfuges, sometimes employing “a feign’d hand”, writing in French or Italian to give protection from servants’ eyes, and directing to other names and addresses. 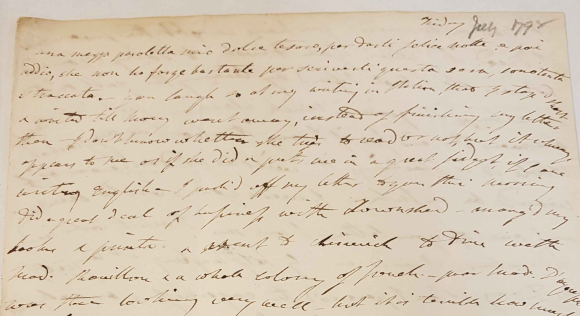 'Una mezza paroletta mio dolce tesoro, per darti felice notte, e poi addio, che non ho forza bastante per scriverti questa sera sono tanta straccata. You laugh so at me for writing Italian,that I stop’d short & waited till Mary went away, instead of finishing my letter then. I don’t know whether she tries to read or not, but it always appears to me as if she did and puts me in a great fidget if I am writing English.'  Lady Bessborough to Lord Granville, July 1798 (Add MS 89382/2/8 f.119r)

Occasionally the couple took even stronger precautions.  Letters from summer 1798 tell how they experimented with vitriol (ferrous sulphate, an ingredient of ink) and sympathetic inks, two different methods of secret writing.  Ink made up of vitriol without galls produced a colourless writing which only darkened when spirit of galls was brushed over it.  Sympathetic ink on the other hand was invisible until brought close to heat.  Despite sympathetic ink’s convenience and availability, Lady Bessborough declared her preference for vitriol. Writing in ordinary and sympathetic ink, on the same page.  'I have got some sympathetic ink but I do not like it half as well as the Vitriol, only it is easier got as they send in the colour boxes of course - and they say it comes & goes as you put it near & take it from the fire. I shall write a few words underneath to try - the first fire you meet with make the experiment, it will do with a candle but not so well.'  Letter from Lady Bessborough to Lord Granville, postmark 11 July 1798 (Add MS 89382/2/8 f.102r)

Importantly, secrecy meant relying on servants –otherwise invisible lower class people like maids, midwives, and nurses.  We know the name of Sarah Peterson, Lady Bessborough’s maid: 'Sally' crops up throughout the correspondence.  Letters from her to Granville after Harriet’s sudden death in Florence requesting loans and assistance for her brother (a riding master in Gazeepore) give us some idea of the value and significance of her role - and an inkling of the turmoil into which she herself was now thrown by the death of her mistress of 39 years. 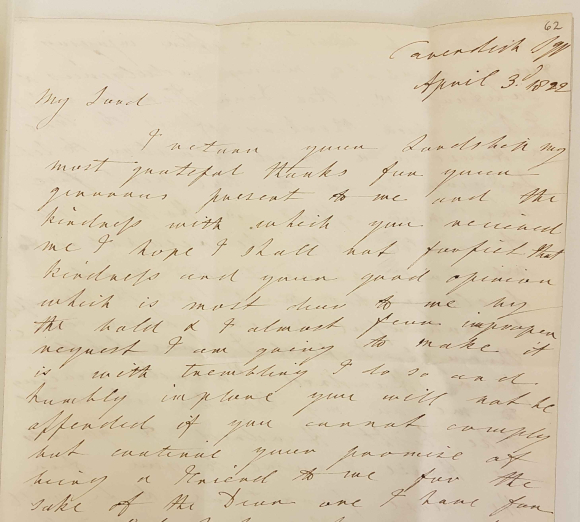 'My Lord, I return your Lordship by most grateful thanks for your generous present to me and the kindness with which you recieved me.  I hope I shall not forfeit that kindness and your good opinion which is most dear to me by the bold & I almost fear improper request I am going to make.  It is with trembling I do so and humbly implore you will not be offended if you cannot comply but continue your promise of being a Friend to me for the sake of the Dear one. …'  Letter from Sarah J Peterson to Lord Granville requesting £800 loan for a house lease and furniture, 3 April 1822 (Add MS 89387/3/1, ff. 62-63)

Posted by India Office Records at 09:00:00 in Women's histories