Internment during the Second World War – Part Two: an album created by a Prisoner of War in Italy

Here is the second of a multi-part series on internment, highlighting the experiences of both civilians and military personnel detained across the globe in the Second World War.

Internment was often a negative experience, but here is something positive which came out of it - a scrapbook put together by British prisoner of war W. “Bill” Millett interned in Rezzanello, Italy.  His regiment was captured in early 1941 while in Africa.  The album features contributions from various men in the camp, Britons, Australians, Indians, and others.  The entries include poems, prose, sketches and even watercolours, showing the talents of these prisoners of war. Bill was evidently held in high regard by others in the camp. Londoner Captain S.G.M. Wright sarcastically reflects:

‘When I look back on these days,
I shall remember you Bill,
With your peculiar annoying ways,
Which, I see you possess still.’

There are 53 contributions, many providing an insight into life in the camp.  One concerns food: ‘The burial of one more (breakfast) at Rezzanello’. The author longs for eggs, bacon, and coffee.  Another regards gambling: ‘Smoke filled eyes and tongues all furry, scarcely seeing in the gloom, Knights of the Round Table, see them, in the castle anteroom.’  Perhaps the most insightful is this two-page drawing showing important times of day, including waiting for the toilet: 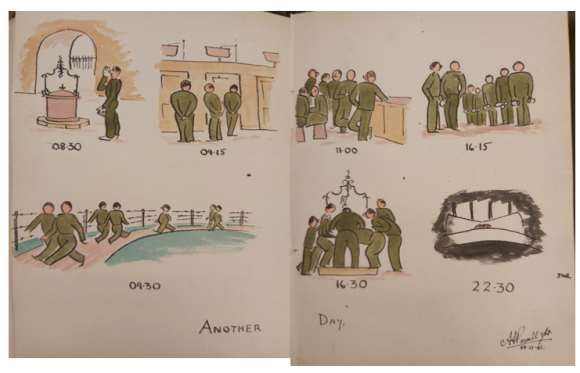 The illustrations include sketches of men, women, children, regiment logos, and even two watercolours of horses.  Horse racing is a theme which consistently appears throughout the album, generally with the jaded pessimism of experienced gamblers.  Most however, appear when the contributors ask Bill to come and see them after the War.  This belief that the War will be over soon persists throughout.

While most contributions are written in English, the album contains prose in other languages too.  One man wrote a couplet in Persian which he saw in Delhi, which he (doubtfully) ascribes to Firdawsi; it contains a few mistakes and is composed in reality by Amīr Khusrau Dehlavī.  Another man gave a short passage in Morse Code: 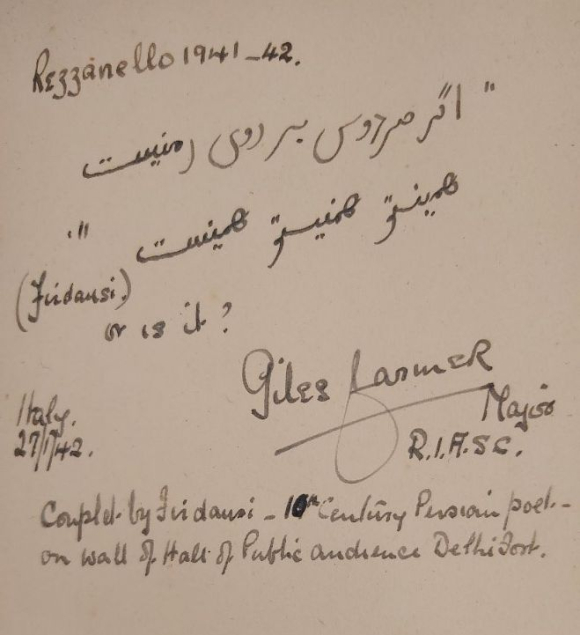 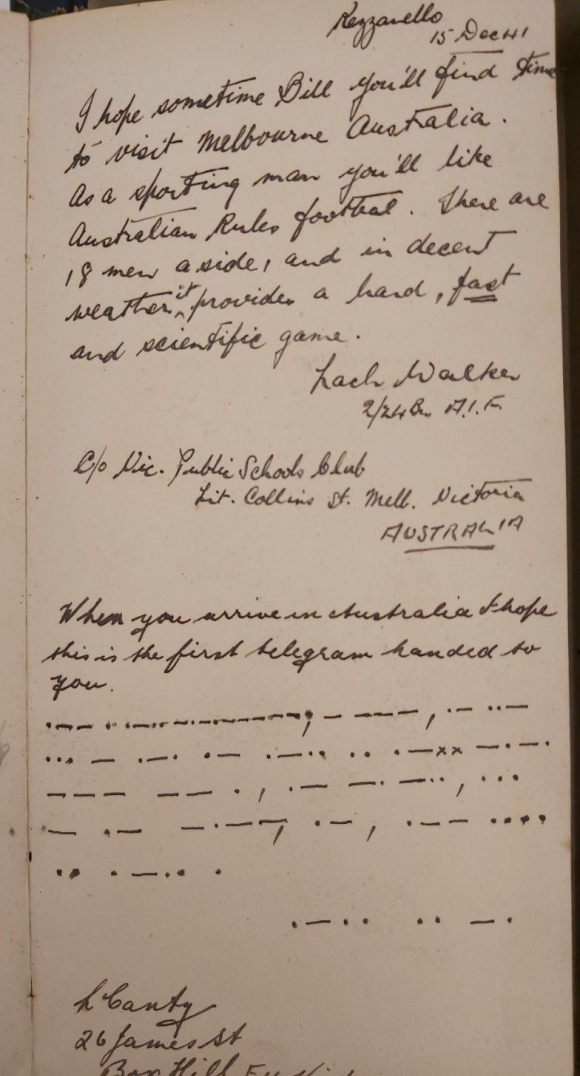 Dickie Findlay-Shirras of the Gordon Highlanders takes the prize for most impressive prose, writing in a combination of English, French, Italian and German! 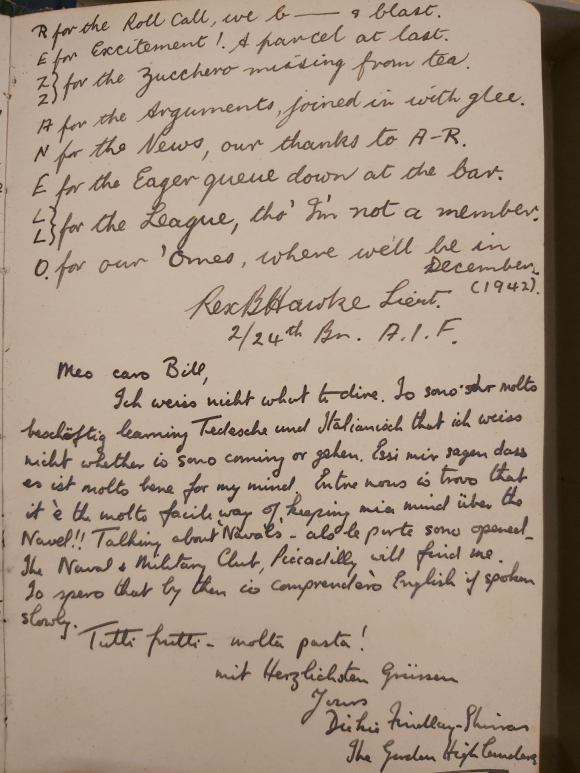 Unsurprisingly, many entries contain philosophical thinking on the effects of internment.  Perhaps Major Brian Ashford-Russell says it best, identifying the positive outcomes of their imprisonment:

‘If our forced sojourn in Italy
has taught us tolerance… given us a better understanding
of the problems and comradeship
of the members of the great-
British Commonwealth, then the
Days will not have been wasted
And we may regard ourselves
As making a real contribution
To the peace, if not to the war.'

The album is not a typical prisoner of war diary.  Judging from the album, men interned at Rezzanello appear to have been treated leniently and with relative freedom.  Major H.A. Moorley, nicknamed Sinbad the Sailor, should have the last word:

‘And if ever in the afterwards,
I am called upon again,
To languish in a prison camp,
in sun or snow or rain,
I hope that arrangements are made,
By the Powers that Be to see,
That the same eight cheeky blighters,
Are in a room with me.’