On 3 February 1908 the Swansea Empire was offering a varied bill of entertainment – music, magic, comedy, ventriloquism, the American Bioscope, and La Freya ‘The Parisian Beauty, in a Novel Speciality’. 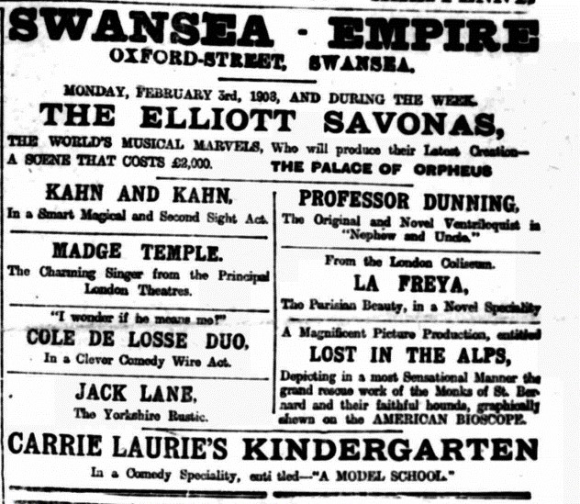 La Freya was a French vaudeville performer whose act consisted of ‘artistic visions and superb poses’.  She appeared at theatres the length and breadth of Britain between the years 1907 and 1915.  In 1909 she was on the bill at the Euston Theatre of Varieties which stood opposite St Pancras Station, a stone’s throw from the British Library’s present site. 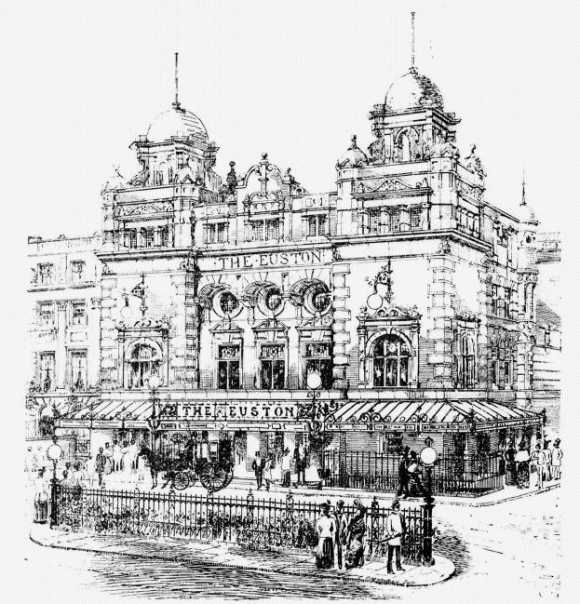 Taking the stage, La Freya stood on a podium in front of a black velvet curtain, dressed in a thin white silk body suit.  Her body was used as a screen.  She adopted a variety of poses as her husband projected lantern slides he had painted to ‘clothe’ her.  The ‘Decors Lumineux of Mr La Freya’ transformed her into visions such as a fairy, a butterfly, a mermaid, a gondolier, and a Scottish Highlander in full warpaint. 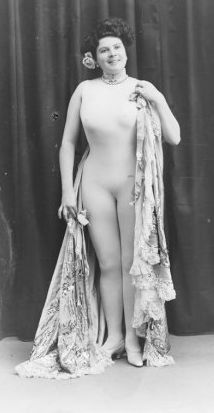 La Freya and her husband had developed the act when they were working at the Folies Bergère in Paris.  The act lasted for ten minutes and the strain of standing still made La Freya sick when she first performed it.  She overcame this, although the lights continued to hurt her eyes.

The couple went to England intending to stay for just one season but ended up staying for several years, apparently because their management would not let them leave.  However La Freya and her husband did travel abroad for short seasons.  For example, from September to December 1910 they were in the United States, captivating audiences in New York, Cincinnati, and Philadelphia. 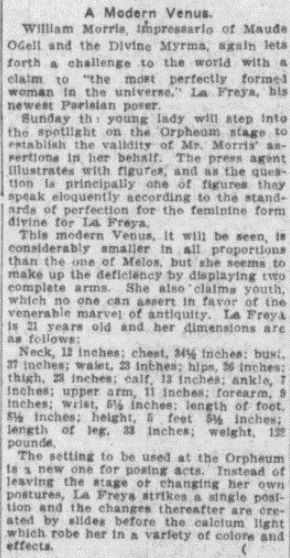 They sailed to South Africa in June 1911 with other performers to fulfil engagements with Sydney Hyman at the Empire in Johannesburg.  By September La Freya was back on the London stage.

In June 1912 ‘Mr and Mrs La Freya’ were passengers on SS Medina to Australia.  They appeared in Melbourne, Sydney, Adelaide, and Brisbane and the act was well-received.  A special tableau was created – the personification of Australia with Sydney Town Hall in the background.

The Australian press was keen to interview the couple.  La Freya spoke to journalists in English with her husband acting as interpreter.  She came from the south of France and her husband, identified as Monsieur La Mort, from Paris.  The Sydney Sunday Times  published a special illustrated feature on La Freya’s fitness regime, with advice on how to achieve a corsetless figure through ten or fifteen minutes’ exercise every day.

‘Mr and Mrs La Freya’ were bound by contracts for two more years and were aiming to make as much money as possible.  Then they planned to retire whilst La Freya was still a big name in vaudeville.  She wanted to concentrate on setting up a house and garden in the south of France, whilst her husband intended to shoot and fish.

It seems that La Freya disappears from the newspapers in early 1915.  So did she retire to lead a quiet life far away from the public gaze?  Can anyone tell me what happened to ‘the most perfectly formed woman in the universe’?