Somerset-born John Jacob sailed to India in 1828 aged just 16 as a second lieutenant in the Bombay Artillery of the East India Company.  He never again set foot in England and died 30 years later of ‘exhaustion’ brought on from over-work. 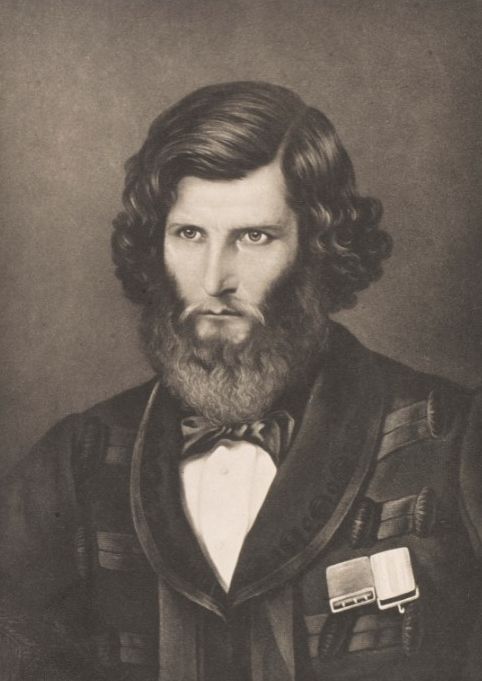 Jacob is primarily known for his ‘pacifying’ achievements as political and military governor in Upper Sindh, which in the 1840s and ‘50s formed the ‘unruly’ north-west frontier of British India. 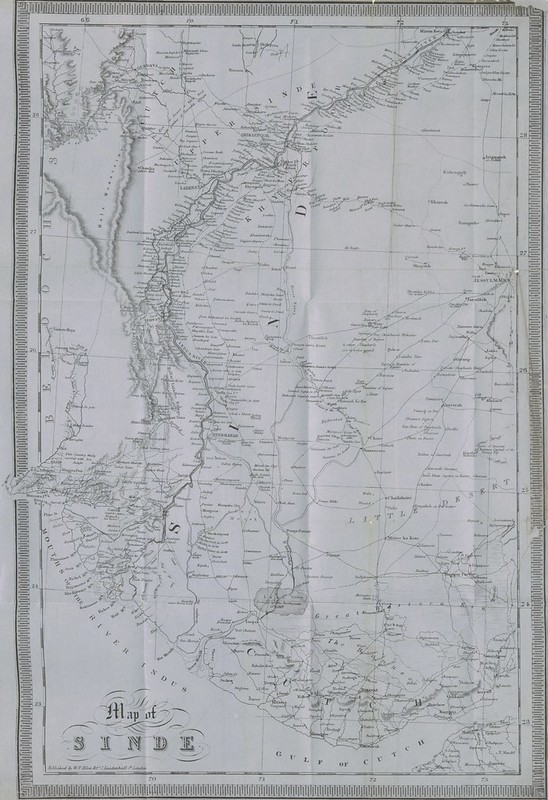 Map of Sindh from Sir Richard Francis Burton, Sindh, and the Races that inhabit the Valley of the Indus; with notices of the topography and history of the Province. (London,1851) BL flickr

An expert administrator and inventor, Jacob built roads, irrigation systems and canals, turned arid desert into fertile land and improved the local economy.  His attitude towards the local Baloch inhabitants was unusually progressive, his benevolence causing them to name his headquarters ‘Jekumbad’ which the British converted to ‘Jacobabad’. 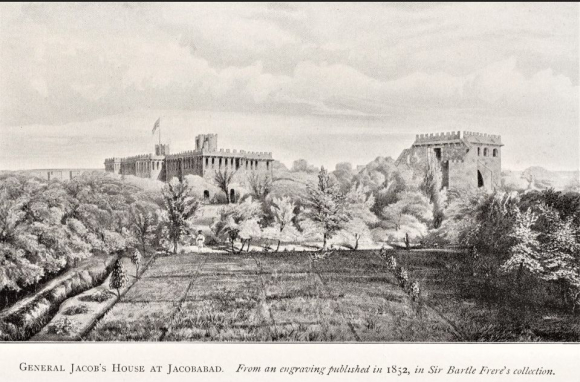 Jacob’s accomplishments and ‘eccentric’ nature are well documented. His correspondence in the India Office Records, however, provides some less well-known insights into a dogmatic man who would brook no challenge, perceived or otherwise, to his authority.

In March 1857 Jacob arrived in Bushire to assist his old friend Lieutenant-General James Outram, commanding the British forces fighting Persia.  A few days later he was placed in charge of the forces at Bushire after the previous incumbent committed suicide.  When news of an armistice came in April Jacob had to organise the British evacuation.

He soon came into conflict with of Charles Murray, HM British Ambassador to the King of Persia.  Murray was a well-travelled diplomat with a privileged, aristocratic background. He and Jacob clashed repeatedly over who was the superior representative of the British Government in Bushire, and over the timing of troop shipments back to India.  Their quarrels spilled over into other operational matters. 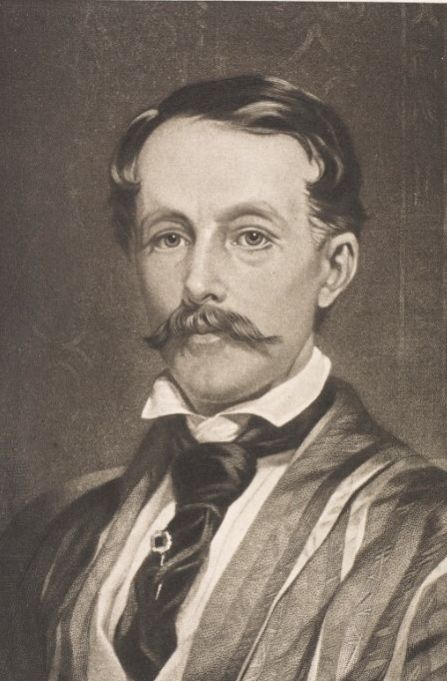 Jacob dismissed Mirza Agha, a Persian official who acted as secretary to Murray at the British embassy. Murray went to great lengths to defend his secretary, arguing he was neither intentionally insolent nor deserving of the public censure and humiliation to which Jacob subjected him.

In May 1857 Jacob arrested and imprisoned two messengers sent to the British camp by the Persian Commander-in-Chief on charges of spying. 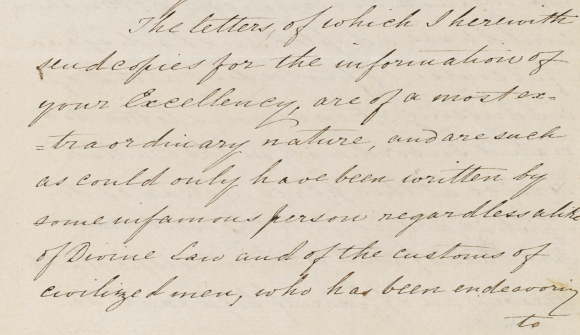 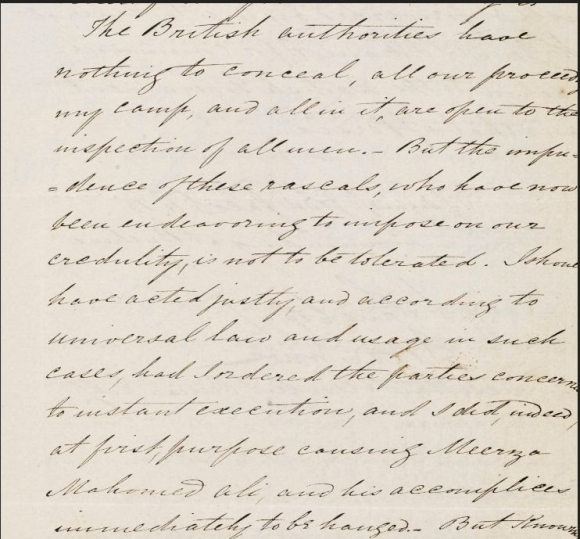 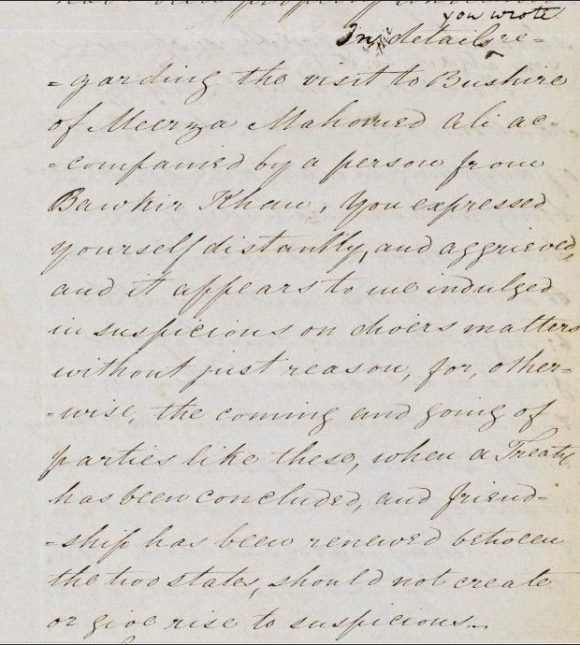 He reminded Jacob that ‘Friendship requires genial intercommunication and not severity that is freezing of relationships’. 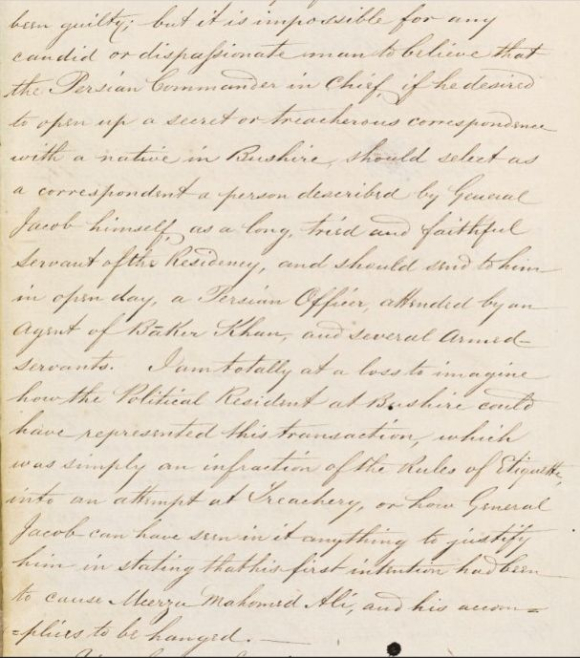 In August Jacob poured scorn on Murray’s warnings of a Persian plot to attack departing British troops at Bushire. Believing the smooth-talking diplomat was trying to protract negotiations with the Persian Government, he wrote to Captain Felix Jones, Political Agent in the Persian Gulf: ‘the contemptible soul of the man was laid bare to me in the Meerza Agha affair. Everything I have seen of him since is in accordance with his base nature..’

Whilst Jacob could be irascible, high-handed and given to hyperbole, there is evidence that Charles Murray was regarded with considerable contempt, even in high circles, as this extract shows:

Back at his post in Sindh in December 1857, an official letter arrived for Jacob from Lord Clarendon, Secretary of State for Foreign Affairs, entreating the two public servants to ‘allow any differences which may have arisen to be buried in oblivion’.  It is probably just as well they never worked together again!